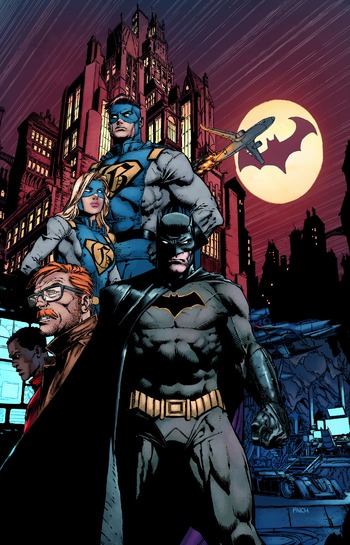 When the New 52 started, Batman was relaunched with the creative team of Scott Snyder and Greg Capullo. However, after five years, they decided to do something a bit different; so while Snyder wrote All-Star Batman, he handed off the reigns of the new DC Rebirth Batman to Tom King (Grayson, The Vision, Omega Men). The series is biweekly, with the rotating art team of David Finch (New Avengers, Forever Evil) and Mikel Janin (Grayson, Justice League Dark), with occasional guest artists.

King's run is an examination of Bruce Wayne's psyche and what being Batman means to him, and how this is challenged as he comes under attack from all sides as a shadowy villain works to destroy him. Also heavily featured is Batman's relationship with Catwoman, which is similarly examined from numerous angles as the two restart their relationship on a more serious note.

King's run has been notable for keeping the same dark, noir tone of Snyder's run, while also bringing back a lot of the sillier villains of the Silver Age (like Calendar Man, Colonel Blimp, and Kite Man), but at the same time goes a step further than Snyder's run by removing Batman's more upbeat and quippy demeanor that came with his "rebirth" after Batman: Endgame.

After 85 or so issues, King's run on the title ended, 15 issues earlier than planned. Instead, he launched a Batman/Catwoman series alongside artist Clay Mann to continue his story. (Think of it as a splinter timeline scenario.)

As for the main Batman book, James Tynion IV (whose had experience with the Caped Crusader) took over as the new writer starting with issue 85's epilogue. Find the page for that run here.