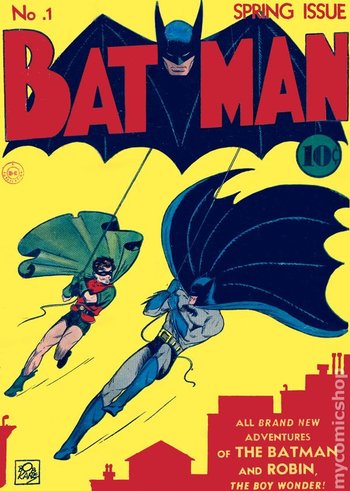 The Dynamic Duo swinging to action!
All brand new adventures of The Batman and Robin the Boy Wonder!
— The cover
Batman #1 is the debut issue of the solo series featuring Batman. It was published in April 25th, 1940 by DC Comics (then known as National Comics) and also contains the first appearance of The Joker, Batman's famed archnemesis, along with fellow nemesis and main Love Interest Catwoman. It also contains a reprint of Batman's origin story from Detective Comics #33. 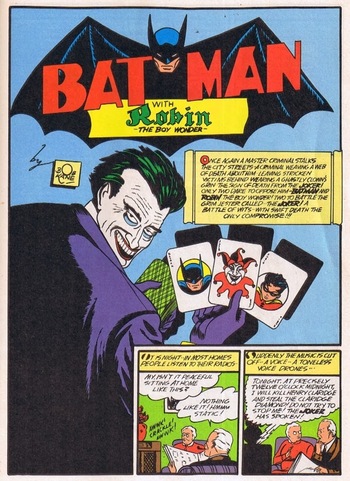 "Wait 'til they get a load of me!"
Once again, a master criminal stalks the city streets- a criminal weaving a web of death about him- leaving stricken victims behind a ghastly clown's grin. The sign of death from The Joker! Only two dare oppose him- Batman and Robin, the Boy Wonder! Two to battle the grim jester called The Joker! A battle of wits- with swift death the only compromise!
—The opening narration of the story

A mysterious person calling himself "the Joker" announces on the radio that he will kill Henry Claridge and steal the Claridge diamond at midnight. A cordon of cops guard Claridge's home, but he dies anyway, at midnight with a grotesque smile on his face. (He's been dosed, much earlier, with a delayed-action treatment of Joker Venom.) The police then discover that the diamond was already stolen, and that it was replaced with a glass one, and the perpetrator has left behind his calling card, a Joker....

Later the Joker goes on radio and announces that he will kill Jay Wilde and steal the Ronkers Ruby. Once again a cordon of police fails to safeguard the victim, who is killed at exactly midnight, with a poison dart, by the Joker, hiding in a suit of armor. The Joker deploys a paralyzing gas against the police, and departs with his loot.

But a mobster named Brute Nelson, who is enraged that the Joker is pulling off all these jobs that he had planned to do, sends word out that he thinks that the Joker is a coward. Bruce Wayne and Dick Grayson hear about this and suspect a trap. Batman goes to the mobster's house. The Joker is also there, and he shoots and kills Nelson, but he is pursued by Batman. However, the Joker gets the upper hand by knocking Batman off a bridge.

Luckily Batman survives. The Joker then resumes his work by announcing that he will kill Judge Drake. The Joker impersonates the police chief, and kills the judge with Joker Venom, and leaves. Robin has been stationed outside, to follow whoever comes out, and he trails the killer to an abandoned house, where the Joker turns the tables on him and captures Robin.

The soles of Robin's shoes have been painted with an special chemical, and Batman used infra-red goggles to follow his trail, arriving just in time to save him from an injection of Joker Venom, and there's a big fight. The Joker sprays Batman with the same paralyzing gas that had taken out a whole squad of cops, but Batman just shakes it off, grabs Robin, and escapes. The Joker also manages to escape. Robin then tells Batman that the Joker was saying that he was going after the Cleopatra Necklace, owned by Otto Drexel. Batman and Robin arrive while the robbery is still in progress; the Joker uses all his ammunition shooting Batman in the chest; Batman has on a bullet-proof vest; Joker loses and is sent to the State Penitentiary.

Tropes pertaining to The Joker

The Giants of Hugo Strange 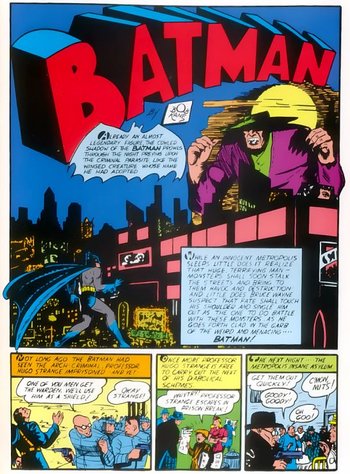 Where's Godzilla when you need him?
Already an almost legendary figure, the cowled shadow of The Batman prowls through the night preying upon the criminal parasite like the winged creature whose name he adopted!
While an innocent metropolis sleeps, little does it realize that huge, terrifying man- monsters shall soon stalk the streets and bring to them havoc and destruction and little does Bruce Wayne suspect that fate shall touch his shoulder and single him out as the one to do battle with these monsters, as he goes forth clad in the garb of the weird and menacing... Batman!
—The opening narration of the story
Professor Hugo Strange returns with a growth formula that changes asylum inmates into 10-foot tall "man-monsters" that wreak havoc on Gotham City. Batman is captured and injected with the serum, but manages to escape and create an antidote. Batman then punches Strange out the window into the murky waters below. Batman then pilots the Batplane and kills many of Strange's henchman, and some of the monsters, with machine-gun fire. He also manages to hang one of the monsters with his Batrope. He finally kills the last monster by throwing tear gas pellets while it is atop a skyscraper, causing it to fall to its death.

Tropes pertaining to The Giants of Hugo Strange 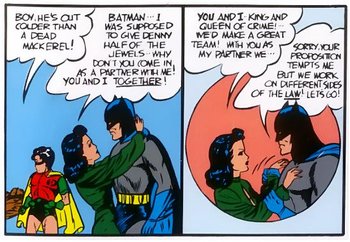 This is what the next 79 years of their relationship will be like...
Once more, that eerie figure of the night, the Batman and his young aide, that laughing daredevil, that Robin Hood of today Robin the Boy Wonder find themselves swimming in troubled waters! A yacht sails a sea of intrigue while aboard her deck lurks an unseen menace. A figure shrouded by an aura of mystery!
—The opening narration of the story
An elderly socialite, Mrs. Travers, is going on a yacht trip with several select friends and a $500,000 emerald necklace. Suspecting that some crook or other will try to steal it, Dick Grayson gets a job as a steward, as Batman has other business elsewhere. Soon, Dick has some suspects: Denny, Mrs. Travers' favourite nephew, who has borrowed lots of money from his aunt in the past (and brought an elderly guest, Miss Peggs, with him), Wallace, Mrs. Travers' doctor (who frequently borrows money to pay off gambling debts), and Mrs. Travers' brother Roger (who wants money to cover stock market losses).

Denny throws a piece of paper over the side of the yacht, but the wind blows it back to Dick. The letter is from The Cat, asking Denny to keep Mrs. Travers away from her room. Suspecting the theft is about to take place, Dick hurries to the cabin, but Mrs. Travers has already discovered the theft. A boat claiming to be the Coast Guard approaches, but it is actually full of mobsters, after the necklace. The mobsters content themselves with stealing everything else, but when they go to shoot someone for protecting his wife, Dick barrels into them and gets knocked into the sea. He takes this chance to turn into Robin.

Meanwhile, the mobsters leave, satisfied with their takings. They race away, but Batman appears and knocks them around. Robin has surfaced and joins in, with an object lesson. consisting of him versus four unarmed mobsters. The crooks quit (to stop Robin from hitting them any more), and Batman proves that, without their guns, crooks are cowards through and through.

They return to the yacht and Batman crashes a fancy dress party, to be awarded with the first prize. He returns the stolen loot and Robin sets off the fire alarm. This is a trap to persuade the Cat to reveal him/herself. Mrs. Peggs races off surprisingly well for someone with a bad ankle, but the Dynamic Duo still catch her. Batman pulls off her wig and removes her make-up to reveal a pretty girl. The necklace is hidden under her bandage. Denny tries to take the necklace, but Batman knocks him out. The Cat tries to persuade Batman to join her as King of Crime, but he refuses.

Then, despite leaving Denny on the yacht, Batman takes the Cat to the police himself. However, the Cat jumps over the side and Batman lets her escape. He's clearly smitten.

Tropes pertaining to The Cat 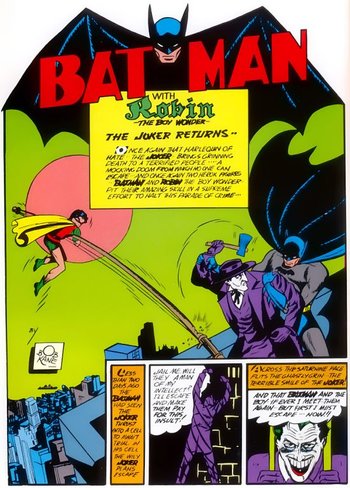 "Let's put a smile on that face!
Once again, that harlequin of hate- The Joker -brings grinning death to a terrified people. A mocking doom from which no one can escape... and once again two heroic figures- Batman and Robin the Boy Wonder pit their amazing skill in a supreme effort to halt this parade of crime!
—The opening narration of the story
Two days after the Joker is captured, he manages to escape using explosive chemicals hidden in some false teeth, and begins to cause more trouble. At home, Bruce Wayne and Dick Grayson hear the news on the radio and Bruce speculates that Joker is probably after vengeance. The Joker enters his secret laboratory through a hidden entrance in the graveyard, and starts plotting. He threatens Chief of Police Chalmers, and kills him a dart, released with a phone call.

The next day, a painting is stolen, and the owner of a stolen gem is found dead, grinning. Then the Joker threatens to steal the Cleopatra necklace. Bruce Wayne, hearing it on the radio, promises to stop him. That night, in the museum, the Joker emerges from a sarcophagus, and uses his poison to incapacitate the guards. Batman appears and disarms him. The Joker seizes an axe and knocks out Batman. The Police arrive, and find the unconscious Batman AND the missing necklace. Before the cops can remove Batman's cowl, he snaps awake and escapes out the window.

A reformer, Edgar Martin calls for the capture of the Joker, and is marked for death. That night, Martin is under guard and plays cards to calm down. But the pack is all jokers, and poison-laced, killing Martin.

The next day Bruce Wayne suggests a trap for the Joker to his friend Commissioner Gordon. The press prints a series of articles on the Fire Ruby, and despite suspecting a trap, the Joker goes for it. When he arrives, the police surround him, and he shoots, making for the roof. Robin, waiting for him, follows. Joker knocks him off the roof, but Robin grabs a flagpole to save himself. Running down to see if Robin has died, the Joker takes aim and is intercepted by Batman. Robin falls down and lands on the Joker. Batman and Joker fight, and Joker stabs himself in the chest. Batman and Robin flee, leaving the Police to find out that the Joker is still alive.

Tropes pertaining to The Joker Returns