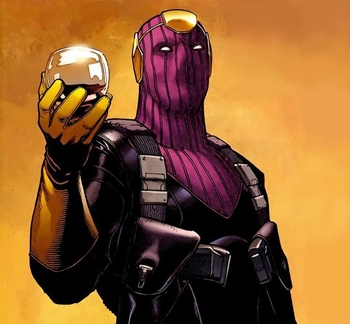 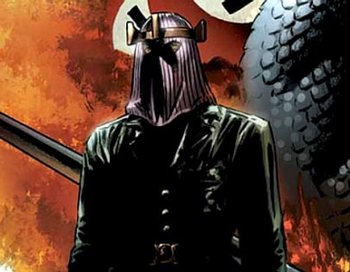 Baron Zemo is a Marvel Comics supervillain, and a Legacy Character that has been held by 13 different individuals of German nobility. The two most famous, and immediately relevant, holders of the title are Helmut Zemo, the current and longstanding Baron, and Heinrich Zemo, Helmut's father and the one responsible for killing Bucky Barnes (initially) and putting Captain America on ice. Helmut has been the most prominent Baron since taking on the title in 1982, and when people say "Baron Zemo", they're likely referring to him.

The first Baron Zemo introduced in Marvel is Heinrich. He was a Nazi scientist responsible for putting Captain America on ice, and was created to be a Suspiciously Similar Substitute for the Red Skull. He first appeared via a flashback in The Avengers #4 (July 1964) by Stan Lee and Jack Kirby, and made his first full-on debut two issues later.

Heinrich was a sworn enemy of Captain America (despite having no appearances in the original Timely Comics), whose hood was permanently glued to his face after a confrontation with Cap led to a material called Adhesive X caused the mask to fuse to him. This drove him insane and made him evil(er). Years later, Heinrich would form the Masters of Evil as the Evil Counterpart of the Avengers upon learning the Captain America has resurfaced. With him as the lead, he would recruit the Black Knight, the Melter, and Radioactive Man, before inducting The Enchantress and the Executioner following their banishment from Asgard, and later Wonder Man (who underwent a Heel–Face Turn). Heinrich, even without superpowers, was one of the Avengers' most dangerous foes.

In the final battle with Captain America, Heinrich was killed by an avalanche from the oncoming chaos. Bucky's death (at the time) was avenged. The Masters of Evil would disband, and reform again with new membership multiple times. Though he only appeared alive in fourteen issues, Heinrich still impacts the world of Marvel to this day. In particular, his actions played a major role in the stories of Captain America, Bucky Barnes (who would resurface as the Brainwashed and Crazy assassin known as the Winter Soldier), and his son, Helmut Zemo (see below).

Helmut Zemo was first introduced in Captain America #168 (December 1973) by Roy Thomas, Tony Isabella and Sal Buscema. In his first appearance, Helmut was known as Phoenix (not to be confused with that Phoenix), who wanted revenge on Captain America for his father's fall into madness and subsequent death. Before the incident, Heinrich loved his son, but afterwards, he abused him both emotionally and physically, and Helmut believed Cap to be responsible. After going toe-to-toe with Cap, as well as his friend The Falcon, Helmut's plan backfired and he fell into the vat of Adhesive X, causing his face to be horribly scarred and for the Phoenix to be reborn as the new Baron Zemo.

For many years afterwards, Baron Zemo would be a recurring antagonist as part of the Masters of Evil. In stark contrast to his father, who died after fourteen issues and remains dead to this day, Helmut is notable in that he simply refuses to die, ever. It's helped by the fact that he always has contingencies and is more of a Pragmatic Villain than his father being insane.

One of Helmut's most famous story arcs is the original Thunderbolts, where he posed as Citizen V (ironic since that was a hero who his father murdered) alongside the Masters of Evil to replace the Avengers following the Onslaught event. His attempt was to take over the world by having all trust put on the Thunderbolts before executing his master plan, but the others ended up becoming genuine heroes when they learned that Being Evil Sucks. This itself created problems. Since then, he's always been a prominent recurring foe. If the Masters of Evil are involved, Baron Zemo will likely lead them.

The two Barons contrast greatly in terms of portrayal. Heinrich is straight-up evil, just as you would expect for a Nazi scientist in an American comic book. His only thing that could be considered a redeeming trait is his love for his son, and even that gets marred by how much he abused him. He's just as bad as the Red Skull, and did things so inhumane that even his Nazi subordinates were disgusted by them.

On the other hand, Helmut is a much more conflicted figure. He struggled with a Dark and Troubled Past thanks to said father, had to come to terms with Heinrich being a horrible father and an even worse man, and eventually disowned him, his ancestry, the Nazi ideology and all associated prejudices while becoming more of an Equal-Opportunity Evil villain. While always remaining on the villain side, he's much more charismatic and sympathetic than Heinrich ever was. 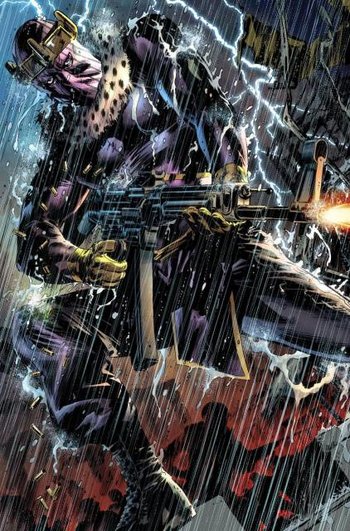 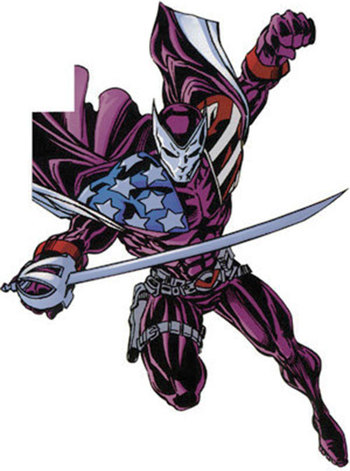