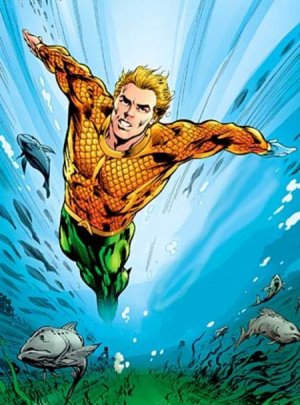 This Looks Like a Job for Aquaman!
"You have hundreds of champions to defend a few land masses. I protect the other seventy percent of the world... and there is only one of me."
— Aquaman's job description, in his own words, in Kingdom Come
Advertisement:

Aquaman (a.k.a. Arthur Curry a.k.a. Orin) is a DC Comics Superhero with water-based powers. He's probably best known for his Superfriends appearances, the lame nature of that version's powers and the fact that he is in practically every episode, whether this makes sense or not ("What's that? Trouble in the desert? Come on team, we haven't a moment to lose! And let's bring Aquaman with us; his ability to breathe underwater and talk to fish are sure to be useful there!"). In essence, having him take part in anything whatsoever was sort of the super-powered equivalent to pity sex.

Aquaman's powers have varied over the years; in all incarnations, he is mainly known for his ability to breathe underwater, swim at high speeds and communicate with sea life. As of The New '10s, Hydrokinesis is increasingly common as well. He also often has something to do with The DCU's version of Atlantis.

Aquaman originated in The Golden Age of Comic Books. He first appeared in More Fun Comics #73 (November, 1941). He was created by Paul Norris and Mort Weisinger. In his earliest appearances, Aquaman was also strong and durable enough to deflect an artillery shell one-handed and outswim a torpedo. His powers were at first said to be the result of special training, but were later described as the result of his scientist father experimenting on him. Rather than communicating with sea creatures telepathically, he could speak with them "in their own language".

He wasn't the first aquatic superhero (Namor the Sub-Mariner first appeared 2 years earlier), but he eventually came to be the most well-known.

Aquaman continued in More Fun Comics until issue #107 (January, 1946). He was then transferred to Adventure Comics, starting with its 103rd issue (April, 1946). During The Interregnum, Aquaman was one of the few Super Heroes who remained in publication, largely due to his status as the backup feature in Superboy's title.

In the Silver Age, Aquaman's origins were revamped; now, he was a Half-Human Hybrid of Atlantean and surface human, raised by his father, a lighthouse-keeper, and unaware of his royal heritage until recently. He was super-strong and tough because his body was "adapted to the sea's depths", and he could telepathically control anything that lived on or near the sea. However, he was also given a Kryptonite Factor of sorts; he could only spend one hour out of the water before succumbing to potentially fatal weakness. Aquaman's career was, like Superman's, also retroactively extended back into his childhood as "Aquaboy," Superboy's sole contemporary hero. (This idea of the son of a light-house keeper and a merwoman may be inspired by the old song "My Father Was the Keeper of the Eddystone Light"

This version of Aquaman turned out to be more popular than the original. He continued appearing in Adventure Comics until issue #284 (April, 1961). He became one of the founding members of the Justice League of America in 1960 and was a regular there. In 1961, Aquaman's strip got transferred to Detective Comics, he starred in a few Showcase issues, and he got several crossovers with Superman. All in preparation of his first solo title, Aquaman vol. 1 #1-63 (February, 1962-March, 1971, revived August, 1977-August, 1978).

In the process, Aquaman picked up a supporting cast, something which he had generally lacked (for a time in the late 40s he had been aided by a Ditzy, Genius sidekick named the Sea-Sleuth but he had vanished without a trace years earlier.) Most notable among them were sidekick Aqualad, and super-powered wife Mera. They even had a kid. The Bronze Age led to his comic being canceled, Un-Cancelled, and re-canceled repeatedly. His child was murdered in an effort to drum up interest and provide angst, and he became the leader of the Dork Age version of the Justice League (often referred to as "Justice League Detroit").

After Crisis on Infinite Earths rolled around, Aquaman, like many DCU denizens, got a new origin. Now, he was Orin, the son of an immortal Atlantean wizard, abandoned to die for his blond hair and raised by dolphins before being found by the lighthouse-keeper. After this, Peter David became his main writer, and revamped him; his hand was eaten by piranhas and replaced with a hook, he grew out his beard, and moved toward epic, Barbarian Hero-style adventures. This led to a successful ongoing series for a time, but it slipped in popularity after David was removed, and was eventually canceled.

This led to yet another revamp. Atlantis was sent back in time thousands of years, its citizens enslaved by their own ancestors, and Aquaman himself was imprisoned as living water. The JLA freed them in "The Obsidian Age" storyline, but Aquaman himself was cast out as a traitor. This led to him finding King Arthur's Lady of the Lake, gaining a magical hand of living water, and going back to his original appearance. This series also involved an underwater San Diego ("Sub Diego"), whose inhabitants had become water-breathers.

This direction, while not wholly unpopular, didn't result in a high-selling series. Thus, during Infinite Crisis The comic, Atlantis was destroyed. After the "One Year Later" Time Skip, Aquaman became Aquaman: Sword of Atlantis, going back to the Barbarian Hero adventures that had done well before. A new Aquaman was introduced, Arthur Joseph Curry, whose origin and powers were similar to the Golden Age Aquaman. He was guided by the "Dweller in the Depths", a tentacled humanoid who was implied to be Aquaman — most prominently, through having the magical water hand. Artie Joe is now considered to be a multiversal equivalent of Aquaman who left Atlantis at the end of Final Crisis.

The Dweller died in the middle of the series, after being revealed as, yes, the original Aquaman, who had made a deal with the sea gods to bring Sub Diego back onto land, after the mutation that allowed them to breathe underwater reverted.

In the Blackest Night Crisis Crossover, Arthur - yes, Arthur again, a version of his Silver Age history as the Half-Human Hybrid son of Tom Curry and Atlanna, cast out due to his blond hair, he eventually earned his people's trust and became King of Atlantis, only to be cast out again and hunted by the Atlanteans - came back as a zombified Black Lantern, determined to show people why you don't mess with the king of the seas. He got off to a hell of a start by ripping out an Atlantean guard's heart and summoning a bunch of zombie sharks to kill people. At the end of the series, he was brought back to life with his classic appearance and no water hand due to his Black Lantern form repairing him. He then went on to play a significant part in Brightest Day, discovering a new Aqualad along the way.

He got a new reboot headed by Geoff Johns (who helmed Blackest Night and Brightest Day) ongoing as part of DC's New 52 relaunch. It really doesn't require knowing any of the above to jump on, and actually tackles the idea of Aquaman being a joke character in its first story arc. It did however, make a few notable changes, including not having yet married Mera, and his rivalry with Black Manta having long ago started over accidentally killing the latter's father. Later on, he got his first ever additional title, the short-lived team book Aquaman and the Others.

His series was resumed as part of DC Rebirth, with Dan Abnett as writer.