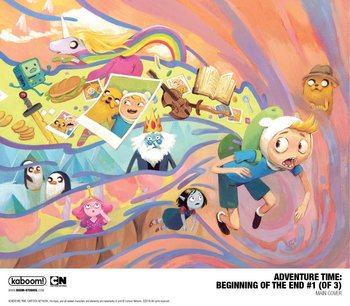 Adventure Time: Beginning of the End is a three issue miniseries written by Ted Anderson (My Little Pony: Friendship is Magic (IDW)), with art by Marina Julia. It serves as the Grand Finale of the original comic book series by BOOM! studios.

Finn breaks a promise he can’t remember making which leads to a confrontation with Chronologius Rex, the lord of Hours and All Time. Now Finn must set on a journey to confront the ghosts of his past selves, the alternate selves of his present, and all his possible futures, while Jake gathers help from all of Ooo and beyond. Together, they must save Finn before he goes beyond the Vanishing Point and is erased from every reality forever.