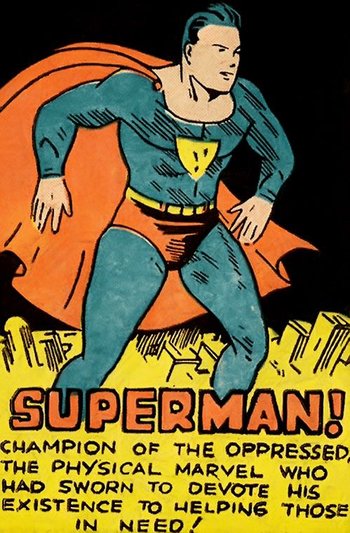 "SUPERMAN! Champion of the Oppressed! The physical marvel who had sworn to devote his existence to helping those in need!"
As a distant planet was destroyed by old age, a scientist placed his infant son within a hastily devised space-ship, launching it toward Earth! When the vehicle landed on Earth, a passing motorist, discovering the sleeping babe within, turned the child over to an orphanage. Attendants, unaware the child's physical structure was millions of years advanced of their own, were astounded at his feats of strength. When maturity was reached, he discovered he could easily: Leap 1/8th of a mile; hurdle a twenty-story building...raise tremendous weights...run faster than an express train...and that nothing less than a bursting shell could penetrate his skin! Early, Clark decided he must turn his titanic strength into channels that would benefit mankind. And so was created...
— The opening page of the story

Action Comics #1 is the first issue of DC Comics' (then known as National Comics) iconic Action Comics series, published around June 1938 at the start of The Golden Age of Comic Books, featuring writing by Jerry Siegel and art by Joe Shuster. While it was made as an Anthology Comic featuring multiple different stories and characters, it is notable for featuring the debut story of Superman, one of the world's first superheroes and one of the most iconic fictional characters of all time.

An expanded version of Superman's debut story was later told in his self-titled magazine, Superman #1.

Tropes pertaining to Superman, Champion of the Oppressed:

And so begins the startling adventures of the most sensational strip character of all time: SUPERMAN! A physical marvel, a mental wonder, Superman is destined to reshape the destiny of a world! Only in Action Comics can you thrill at the daring deeds of this superb creation! DON'T MISS AN ISSUE!