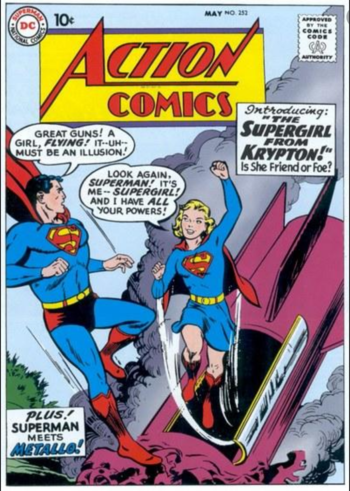 The Girl of Steel has arrived!
As we all know, Superman arrived on Earth in a space rocket long ago, when he was Superbaby! The Man of Steel has always thought he was the sole survivor of the tragic catastrophe that destroyed his home world Krypton! But fate has many strange twists! And the happiest event in Superman's lonely life occurs one day, which will astound and delight all fans of Superman too! For this is not an ordinary tale of Superman, But the launching of a new member of our "Super Family." So, without further ado, we take pride in introducing... THE SUPERGIRL FROM KRYPTON!
— the opening narration

Action Comics #252 is an issue of Action Comics that was published on March 31st, 1959 with a cover date of "May 1959". This issue marks the first appearance and origin story of Superman's cousin Kara Zor-El, aka Supergirl.

The story begins with Clark Kent picking up a strange sound far from Metropolis. He soon sees, with his telescopic vision, that it's a guided missile with a human passenger inside, and it was about to crash. He changes to Superman and flies off to investigate. As the Man of Steel attempts to save the passenger, he is soon surprised to see that not only is the passenger, a young, blonde-haired girl, is miraculously unhurt, but is wearing an costume similar to his! What's more, the girl instantly recognizes Superman and tells him that she hails from the planet Krypton.

The girl, revealed to be named Kara, tells Superman that, when Krypton exploded, a huge chunk of the planet was hurled away in-tact, with people on it no less. Zor-El, Kara's father, was a scientist who was among the survivors. He soon began to notice that the ground was glowing green and began severely weakening the populace, learning that the nuclear explosion converted their shattered planet into Kryptonite and it will irradiate and kill them all over time. Fortunately, Zor-El had a roll of sheet metal made of lead and it kept the surviving Kryptonians safe from it's radiation. They enjoyed a nice, long peace and, soon, Kara was born. Sadly, the peace did not last and, as Kara grew older, a meteor shower smashed holes into the shield, releasing the radiation. Knowing that they're doomed, Zor-El quickly decides to send his daughter to another world, specifically Earth where he and his family learn is where Superman, a fellow Kryptonian, lives in. Thus, handing their daughter a suit similar to Superman's, Zor-El and his wife send Kara away on a rocket targeted to Earth, leaving her an orphan.

Superman mentions how Kara's circumstances are quite similar to his, he too being sent to Earth in a rocket by his father Jor-El. Kara quickly recognizes the name and reveals that her father was Jor-El's brother, thus making Superman her cousin. Knowing that she now has family in her new world, Kara embraces Superman and asks if she could live with him. Superman rejects her offer and decides to develop a secret identity for her. The two fly to Midvale and tells his cousin that she will begin her superheroic career as "Super-Girl, the Girl of Steel!" When Kara wonders if she could start now, Superman tells her that she needs further training before she's ready and then sends her to an orphanage, where she will reside. Putting on a brunette wig and a dress, Kara creates her Earth identity of "Linda Lee" and, when Superman returns, he places her under the orphanage's care. Superman does tell her that, someday, the world will learn of Supergirl's existence but for now, she must live as an "ordinary girl" until she gets used to her new home. The story ends with Kara putting on her Supergirl costume and flying around Midvale, wondering whether or not she'll do as good being a hero in her town.

Tropes pertaining to The Supergirl from Krypton

If you want to find out, readers, you can! Super-Girl's adventures will continue regularly hereafter in Action Comics, along with the doings of her famous cousin, Superman! See the next issue for another thrilling story about this Girl of Steel, a brand-new member of our Super-Family along with Superboy and Superman!