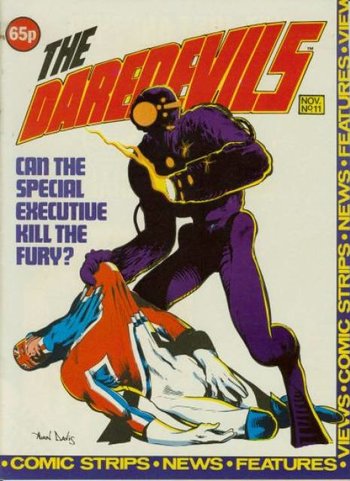 Not a Terminator. FAR more terrifying.

A Crooked World (also known as Jaspers' Warp), is a storyline between 1981-1984 involving the superhero Captain Britain written originally by Dave Thorpe, who was later replaced by Alan Moore and with Alan Davis as artist.

Brian Braddock is sent to a parallel universe designated Earth-238 by Merlin, accompanied by Jackdaw, and is confronted a lot of weird happenings, like a a monster made of junk and a group of Alice in Wonderland-themed villains called the Crazy Gang and the enigmatic Saturnyne. Saturnyne requests the Captain's help in giving this world "The Push" - to give the "primitive" world an evolutionary boost to push it towards rationality. Just as Captain Britain and Saturnyne celebrate the success of the mission, a mutant dubbed Mad Jim Jaspers, a former politician-cum-gang leader, who used his reality-warping ability to create these creatures, including the Crazy Gang, unleashes the "Jaspers' Warp" - chaos is spread across London, and spreads much further, creating a "crooked world". There's another key creation of Jaspers' that opposes Captain Britain, which is none other than The Fury - a half-man/half-machine monstrosity which Jaspers created to kill his world's superheroes. Jackdaw, and later Captain Britain himself, is killed by the Fury. However, with Merlin's intervention, Captain Britain is restored to life and sent back to his universe. Meanwhile, Saturnyne is brought to a pan-dimensional trial and is facing execution for allowing the Jaspers situation to get out of hand, and the entire continuum is destroyed to prevent the "Jaspers' Warp" from contaminating other realities. However, it turns out the Fury somehow survived his reality's destruction.

Brian encounters his twin sister Betsy again in London, who with her lover Tom Lennox, find themselves on the run from an assassin that's killing psychics. Meanwhile, another survivor from Earth-238, Linda McQuillan - the former Captain UK somehow arrives on Earth-616, traumatized by the deaths of her superhero colleagues. Then she notices on the news a politician named Sir James Jaspers running for Prime Minister on an anti-superhuman platform, and tries to warn Captain Britain that what's starting to take place in his world is exactly what happened in her own.

This story is notable for being the only work that Moore did for Marvel, and for It's also really where the Captain Britain comic strips really came onto their own, as the storyline not only was where Captain Britain got a costume change, but saw an introspective B-list superhero confront nearly unstoppable adversaries, and as part of something way above him, introducing what would become staples of the Captain Britain mythos: The Captain Britain Corps, and the Omniversal Majestrix Saturnyne. It's also the storyline where the main Marvel Universe gets its designation: Earth-616 from. The events of the storyline didn't stop with its conclusion, as the effects of "Jaspers' Warp" continued after his defeat, somewhat averting No Ontological Inertia, and the Crazy Gang existed on Earth-616 as well, not to mention a series of "Warpies", a strange baby-boom of young children who were affected by Jaspers' reality warping, developing powers not unlike that of mutants, emerging some two decades later (in real time).

The storyline was reprinted in a series of seven issues released as "X-Men Archives: Captain Britain" in 1995, and a color reprinting in trade paperback was released in 2002.

A Crooked World provides examples of: