This is the character sheet for Zoids: New Century. It's got quite a few for such a relatively short series, so enjoy! 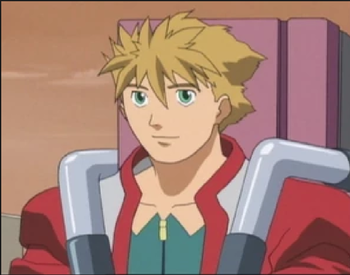 The series protagonist, Bit begins the series as a drifter in the slow process of gathering enough parts to build himself a zoid partner. His plans change when he meets the Blitz Team and the Liger Zero takes a shine to him; he decides to join the team and partner up with Liger Zero. Though understandably inexperienced when he first starts out, Bit manages to pull his weight through a combination of Hot Bloodedness and sheer happenstance; opinions differ, both in universe and without, on whether he's an Idiot Hero or a master of Obfuscating Stupidity. Either way, it's not long before his opponents stop underestimating him, and he eventually grows into a talented warrior in his own right. 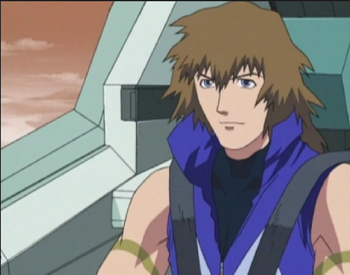 A calmer, more professional counterpart to Bit, Brad is a mercenary who technically isn't a permanent member of the Blitz Team, but none the less remains with them for the entire length of the series. Concerned first and foremost about prize money, he generally avoids fights he isn't being paid for, but that doesn't stop him from helping out when necessary. He pilots a Command Wolf for most of the series, but obtains the Shadow Fox near the end. 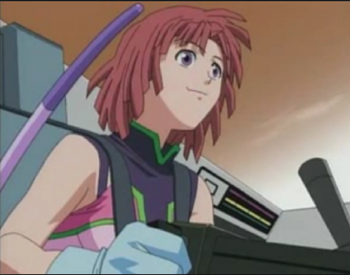 The Blitz Team's resident firepower aficionado, Leena really enjoys shooting her opponents a whole lot. Rather self-absorbed, she's at least as concerned with her personal pilot ranking as she is with the Blitz Team's success as a whole. She pilots a Dibison at first, but later upgrades to a heavily customized Gunsniper. She's also the object of Harry Champ's affections, which she alternately bemoans and shamelessly uses to her advantage. Leon is her brother; Dr. Toros is her father. 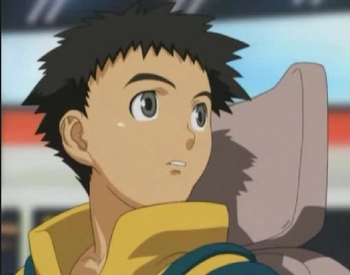 Jamie is the Blitz Team's strategist, combat coordinator, and assistant to Dr. Toros. He also acts as a pilot occasionally, being the only member of the team with an aerial zoid, but he is not particularly skilled in this department. Despite this, he is extremely devoted to his beloved Pteras, and bemoans its being repeatedly shot down in combat. Dr. Toros eventually trades the Pteras in for a much more capable Raynos. Taking the Raynos into combat brings out another side of the rather meek Jamie; known as the Wild Eagle, this personality is much more confident and aggressive (though not particularly more skilled) than his normal self. 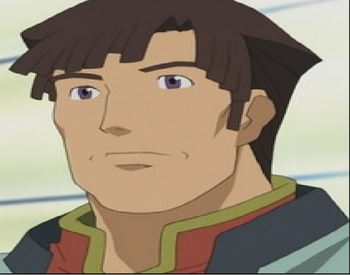 Dr. Toros is the Blitz Team's sponsor and nominal leader, though he tends to let Jamie handle the battle planning. Remarkably immature for a middle-aged man with a doctorate degree, he frequently makes decisions based on what would be coolest, and can often be seen playing with model zoids (lovingly rendered in the same 3D CG as the real things). Those who underestimate him do so at their peril, however; he can be unexpectedly shrewd (especially when it comes to money) and is genuinely gifted when it comes to upgrading and customizing zoids. He is Leena and Leon's father.

A rare Liger Zoid purchased by Toros. Possessing an a unique sentience, he refused to allow anyone to pilot him so the Blitz Team never used him. Surprisingly the Liger Zero allowed Bit to pilot him, allowing the two to become the ace of the Blitz Team. Gradually the Liger Zero is revealed to a legendary Zoid called an Ultimate X that possesses the ability to learn and adapt to battles. 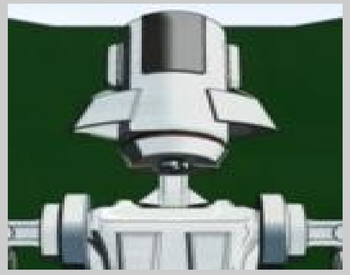 Actually a series of identical robots, the Judge supervises all sanctioned battles. The law on the battlefield, the Judge's decisions are final. Deployed to battlefields by dropping from a judge satellite in a judge capsule, which rockets them back into space once the battle is complete. 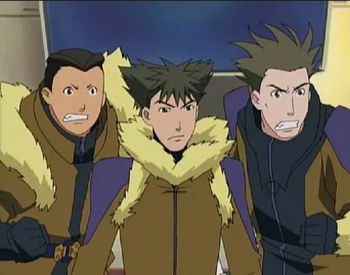 A trio of warriors named Kirkland, Omari, and Lineback, they pilot Saber Tigers. The first episode features them nearly defeating the Blitz Team (who gain a respite due to Bit's illegal presence on the battlefield), but during the rematch Bit and the Liger Zero join midbattle and defeat them. This marks the beginning of a painful losing streak for the Tigers, despite several attempts to break out of it, such as joining forces with Dr. Layon (twice). Eventually they change their name to the Zaber Fangs in an attempt to shed their bad luck. 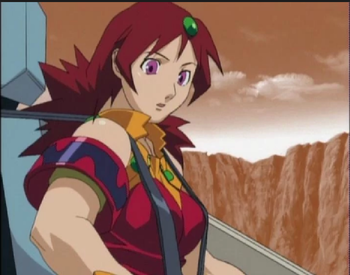 The leader of the Flugel Team and one of the first opponents faced by the Blitz Team after Bit joins, Naomi pilots a customized Gun Sniper. Unsurprisingly, she specializes in sniper duels, special matches were warriors are allowed only six rounds of ammunition each. At first she habitually picks up random rookie pilots to fill out her team roster, content to use them as decoys while she does all the actual fighting herself, but late in the series she recruits Leon Toros as her partner, resulting in a potent short range/long range duo. 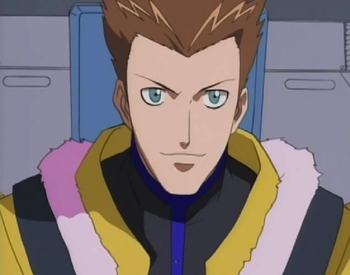 The leader of the Champ Team, composed of himself and his two robots, Benjamin and Sebastian. He usually pilots a modified Dark Horn, but has "everything from a Gojulas to Cannon Tortoises" in his hanger, and by the end of the series he's switched to an Iron Kong. Harry is the heir to a vast fortune, and uses this to his advantage in the world of Zoid battles. He is hopelessly infatuated with Leena, and her lack of reciprocation generally only inspires him to new heights in his quest for her love. 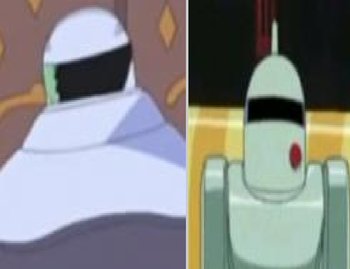 From left to right: Benjamin and Sebastian.
Two robots custom-built for Harry, but that doesn't stop them from being entirely human in terms of personality. They're Harry's only real friends, as well as being pilots for the Champ Team and general assistants for Harry. Benjamin is the taller one and pilots a modified Stealth Viper; Sebastian is the shorter one, and pilots a customized Heldigunner. Both later upgrade to Iron Kongs. They get a Day in the Limelight episode late in the series when Benjamin falls in love with a Judge robot — a specific Judge robot — and Harry and Bit help unite the pair. 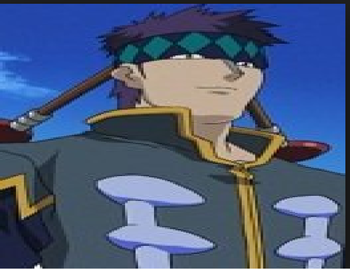 A professional mercenary and notorious zoid warrior, Jack fights for a paycheck. Not concerned solely with money, he's somewhat picky about the clients he takes on. Jack pilots a Lightning Saix, a cheetah-like zoid capable of reaching staggeringly high speeds. In his first appearance, Harry hires him to help defeat the Blitz Team. In later appearances, he joins forces with the Tasker sisters, two additional Lightning Saix pilots. 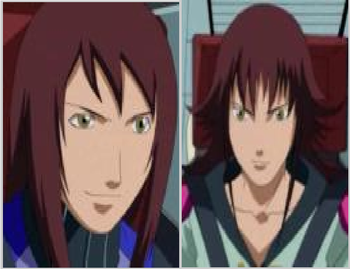 From left to right: Chris and Kelly.
Chris and Kelly Tasker, two sisters that form the Lightning Team. They pilot Lightning Saix, specializing in high-speed battles. Jack Cisco joins them after his defeat with Harry, reasoning that working together with other top pilots will help increase his own skills. The Tasker sisters themselves don't get much screentime, but the Lightning Team is notable for being the only group to defeat the Blitz Team throughout the entire course of the series. 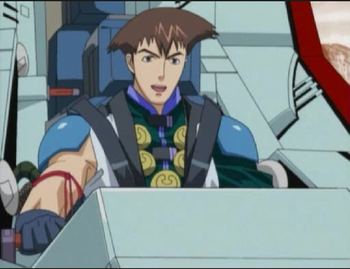 Originally a member of the Blitz Team, he leaves when Bit joins in order to Walk the Earth and grow as a Zoid warrior. Originally piloting a standard Shield Liger, he returns to the fray late in the series with a red Blade Liger. Rather than rejoining the Blitz Team, he chooses to partner with Naomi Flugel, primarily in order to test his skills against Bit. Together the pair form a dual rivalry with Leena (Gunsniper to Gunsniper) and Bit (Blade Liger to Liger Zero Schnieder). The two do well in battle, making it all the way to the Royal Cup.
Backdraft Group 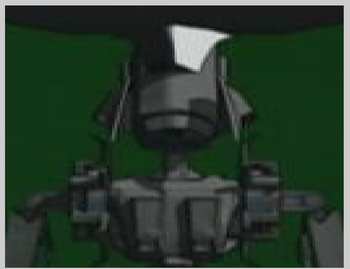 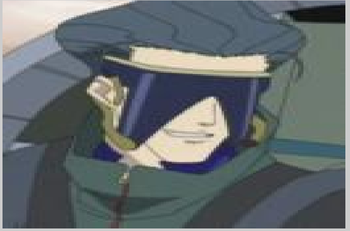 The leader of the Backdraft Group's Gold Team and the first member of the group encountered by the Blitz Team. He eventually becomes Altail's primary subordinate. 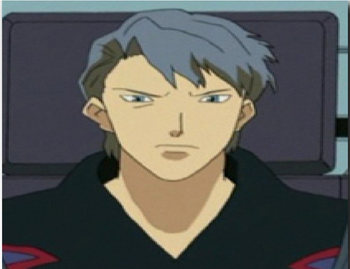 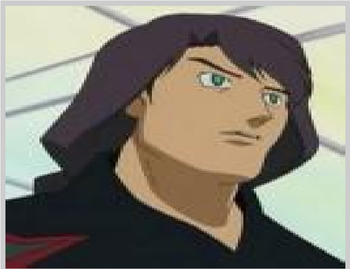 Stoeller's subordinate, he pilots the Elephander during its first appearance. Loyal to Stoeller specifically, rather than the Backdraft Group as a whole, he joins Stoeller in defecting. 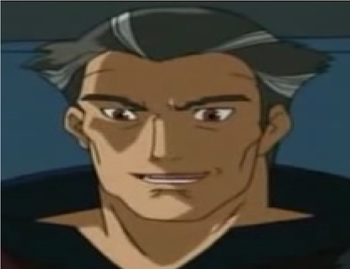 One of the major players in the Backdraft Group, his obsession with the Ultimate X Zoids eventually leads to his disgrace. Even after he actually finds an Ultimate X, he's brushed aside in favor of its assigned pilot, Vega Obscura, and his caretaker Sarah. He organizes a coup attempt utilizing the Fuma team, but fails and falls with the rest of the Backdraft Group. 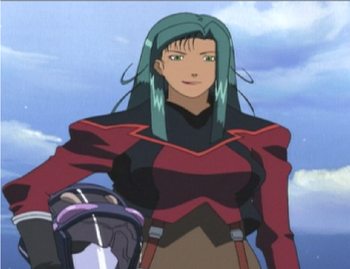 The Backdraft Group's air combat specialist, she first appears piloting a Zabat when the Backdraft steal the Liger Zero. Later, she reappears in a Stormsworder, and acts primarily as a rival for Jamie (as the Wild Eagle) in the Raynos. She enjoys Zoid battling for its own sake, and joined the Backdraft primarily because she finds no-rules fighting more enjoyable than the Zoid Battle Commission's regulated matches. Eventually she tires of them, and appears to trade in her Zoid for a motorcycle. She's last seen toasting the Blitz Team's Royal Cup victory with Stoeller and Sanders. 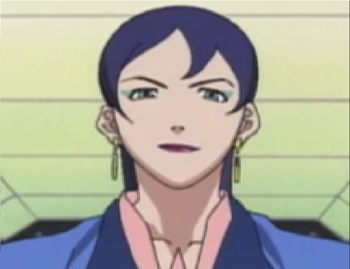 A high ranking Backdraft commander and Vega's manager. She is calculating and ambitious, and comes up with a plan to take over the Zoids Battle Commission, and very nearly succeeds. Though she is cold and manipulative towards everyone else, she shows a maternal side towards Vega. 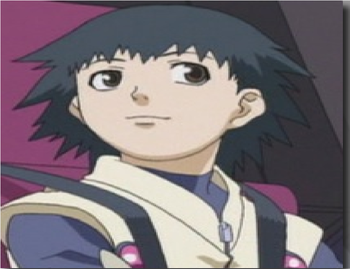 Known as the King of Unsanctioned Battles, Vega is an amazingly talented pilot and fighter in spite of his age. He views Zoid battles simply as a game to amuse him, and brings down the Blitz and Lightning team simultaneously in his first appearence. He's chosen to pilot the Berserk Fury, a Tyrannosaurus rex-type Zoid and an Ultimate X just like the Liger Zero.

A Tyrannosaurus rex Zoid found by the Backdrafter Group. Like the Liger Zero he is an Ultimate X, and only allows Vega to pilot him.
Others 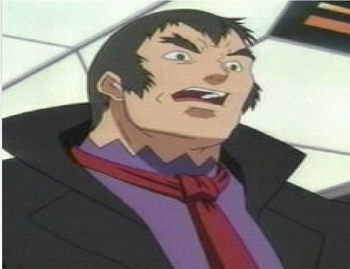 An old friend of Dr. Toros and Jamie's dad Oscar, their friendship soured after an incident involving a woman. Now Laon is obsessed with revenge against Toros, trying to prove himself to be the better man by besting Toros' team in zoid combat. He eventually joins the Backdraft Group in order to gain access to more resources to pour into his vendetta. 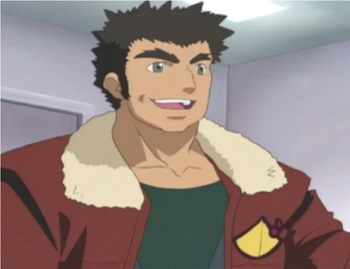 Jamie's dad, and an old friend of Doctors Laon and Toros. He was a talented aerial Zoid pilot, until he had a major crash in his Raynos, and he never flew again... 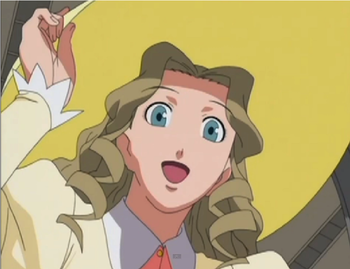 Harry's sister, she appears in a single episode and tries to convince Harry to give up Zoid battling and return to the family. Harry refuses, citing his "relationship" with Leena, who Mary demands to meet. Harry introduces her to the Blitz Team; she's not impressed with Leena, but becomes enamored with Liger Zero. Challenging the Blitz Team to a Zoid battle with Liger Zero as the prize, Mary joins Harry in battle after outfitting the Champ Team with high performance (and expensive) equipment like Iron Kongs and powerful missiles. They lose anyway, and Mary leaves Harry to his Zoid battles, with shiny new equipment and the renewed support of his family.