Warning: All SPOILERS are unmarked! 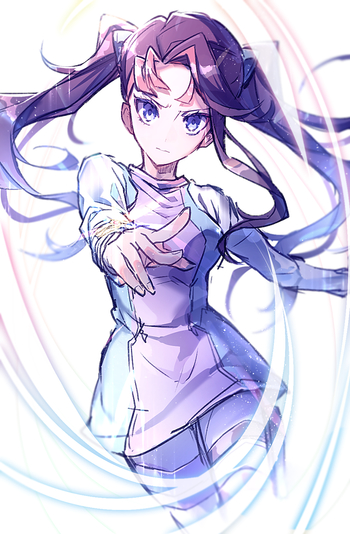 The titular Villain Protagonist of Zero Hour, a Duelist from the Original Dimension, Ray was the original form of Yuzu Hiiragi and her other doppelgangers Serena, Rin, and Ruri.

Ray was the daughter of Leo Akaba, who she later renounced as her father, and no longer associates herself with her family name. She and Zarc were Childhood Friends who confide with each other due to the neglect of their own respective parents, and their friendship soon blossoms into romance as they grew older. By the time Zarc had declared war on humanity in revenge for their Blood Lust, Ray joins him in an Unholy Matrimony, leading to the two transcending into Godhood by fusing with their four respective monsters.

As the two of them laid waste to humanity as Physical Gods, four Duelists from different times unite together and wage battle against the two by utilizing four special cards. This leads to the split of the Original Dimension and the two gods into four, ending their lives entirely.

However... through Yuzu and her counterparts, Ray guides them and offers each girl a portion of her power to reunite with her beloved, which jumpstarts the plot of the fic. 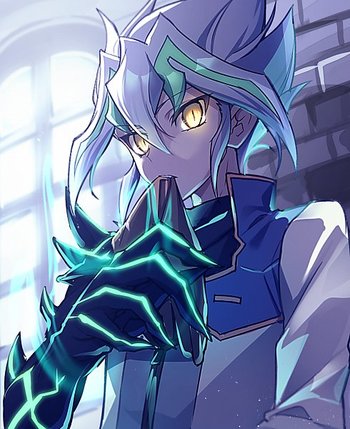 The titular main antagonist from ARC-V, but serves as the Deuteragonist to Ray in Zero Hour. A Duelist from the Original Dimension who is the original form of Yuya Sakaki and his other counterparts Yuto, Yugo, and Yuri, as well as the original owner of the Four Dimension Dragons: Odd-Eyes Dragon, Dark Rebellion Xyz Dragon, Clear Wing Synchro Dragon, and Starving Venom Fusion Dragon. 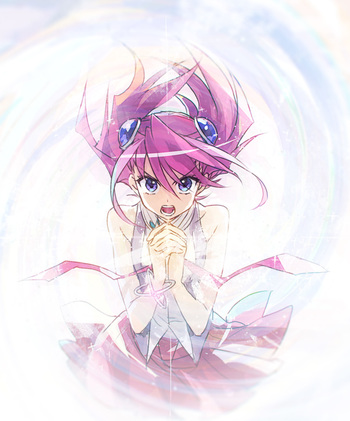 One of the protagonists of Zero Hour and Yuya's childhood friend, she is the daughter of You Show Duel School's headmaster. Where Yuya is energetic and upbeat, she is more rational, though rather quick to lose her temper. She has a habit of whacking people, particularly her father and Yuya, with a paper fan whenever she's annoyed with them. She is a "piece" of her original incarnation named Ray, a young woman who joins her beloved, Zarc, into destroying the world. 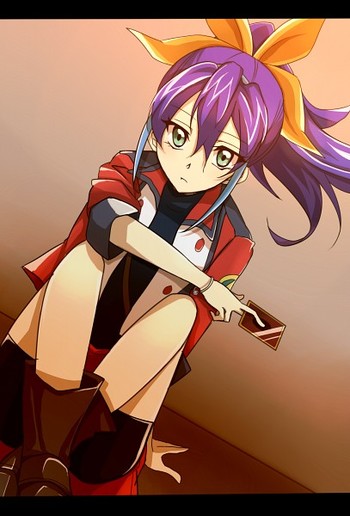 Serena hails from the Fusion Dimension and has been held against her will inside Academia for about three years despite being on their side. After learning the Awful Truth of the true nature of her comrades and how she's nothing more but a sacrifice for The Professor, Serena joins Ray and her other counterparts in their efforts to revive Zarc. 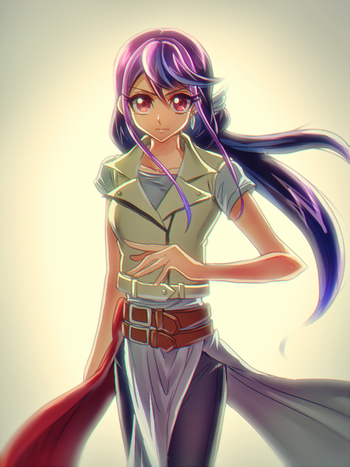 A girl that comes from the same place Yuto and her brother Shun Kurosaki comes from, Heartland City. After being spied on by Dennis and having her home dimension be nearly destroyed by Academia.

One day during a mission, Ruri was contacted into the mindscape of where she meets Yuzu and her other counterparts. When learning of the Awful Truth of why her home was destroyed and her true purpose as a sacrifice for The Professor, Ruri became much more harden in her resolve to fight against the Academia Forces and aids Ray into reviving Zarc. 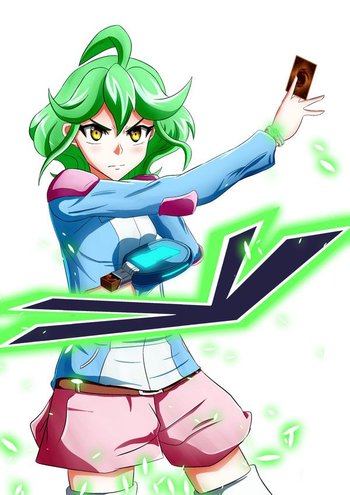 Yugo's childhood friend who also hails from the Synchro Dimension and grew up with Yugo as a part of the "Commons" in the slums of Neo Domino City. Like Yugo, she too dreamed of building a D-Wheel of her own and using her dueling skills to participate in the Friendship Cup to escape the hardships of her environment.

After coming into contact with Ray and her other counterparts, Rin joins them to revive Zarc and grew closer to Yugo in the process.

Her deck is a Wind Witch deck, themed after winter, wind, and bells, which focuses on Burn Damage and copying effects from the Graveyard. 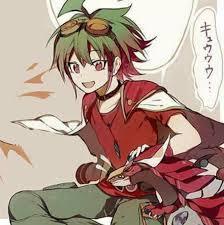 Yuzu's childhood friend and the son of You Show Duel School's founder. He aspires to become an Entertainment Duelist and bring laughter to people through his duels as his father did before him, at least before Yusho's mysterious disappearance three years ago.

He owns a good-luck charm pendant his father gave him when he was younger, which mysteriously glows during his televised exhibition match against Strong Ishijima. This unlocks the power of an entirely new Summoning method, Pendulum Summoning.

He uses an Entermate Deck, which features animals in costumes that focus on altering the ATK and DEF of monsters; he later starts incorporating the Odd-Eyes archetype. His ace is his Odd-Eyes Pendulum Dragon, one of the four Dimensional Dragons. 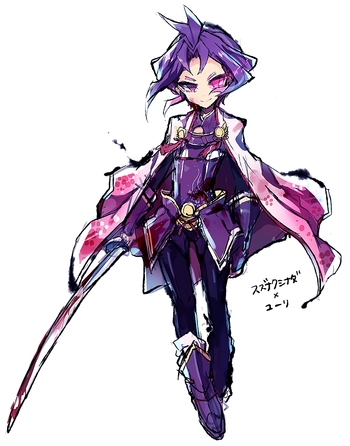 A member of Academia under the direct command of Professor Leo Akaba. He is Yuya's Fusion Dimensional Counterpart, due to them sharing the same face and originally being of one entity, "Zarc".

He was sent by the Professor to capture Yuzu Hiragi. However, doing so awakened Ray in Yuzu and the other Bracelet Girls made them aware as to what Akaba is planning for them and empowered them (along with Yuri becoming an ally with Ray).

He utilizes the Predator Plants, a legion of DARK Plant type monsters that can swarm the field, impairs and ensnares opponents with their effects, and sets up ideal conditions for his ace monster, Starving Venom Fusion Dragon. 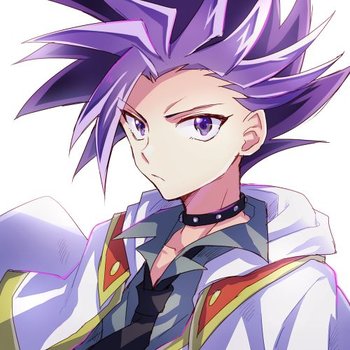 One of the survivors of the invasion on the Xyz Dimension, as well as a member of Resistance. He is Yuya's Xyz Dimensional Counterpart.

He uses a Phantom Knights deck that focuses on summoning Xyz Monsters, including his Dark Rebellion Xyz Dragon, and makes use of Spell and Trap Cards that can be activated from the graveyard. 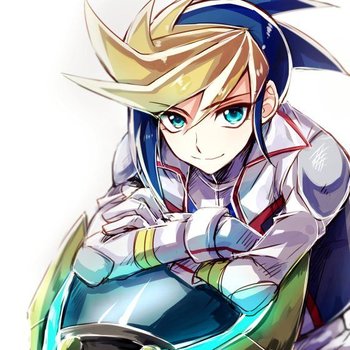 Rin's childhood friend who hails from the Synchro Dimension and grew up with Rin as a part of the "Commons" in the slums of Neo Domino City.

He uses a deck with Speedroids, Wind-Machine Type Monsters that resemble toys or are references to games, primarily those centering on dice. Yugo also relies on luck as a powerful factor in his duel style and all his monsters lead up to supporting his ace monster, Clear Wing Synchro Dragon.

Yusho Sakaki's duel school where the main focus is to entertain the audience. When Yusho Sakaki vanished, it fell into a decline until a group of duelists decided to spruce it up and bring in revenue again.

Yugi Muto
A prominent duelist who helps out at the You Show Duel School. He uses an Illusion deck, which are monsters based on him and his friends but with classes out of an RPG.
Atem
Mana
Atem's twin sister who is one of the best duelists in You Show Duel School.
Joey Wheeler
A street duelist who saved Yuya after he was being picked on for his father's disappearance. For this, Yoko has allowed Joey to bunk at the Sakaki residence and he becomes Yuya's older brother.

The remaining Xyz duelists who haven't been captured by Academia; are the last remnants of a world that's gone to hell due to dimensional invaders. The Xyz dimension was originally a peaceful place to live in before they were attacked without warning. After repelling against most of the Obelisk Forces, duelists of the Resistance were able to procure the same technology as their enemies and can now inflict real damage on their opponents and sealed them away into cards. 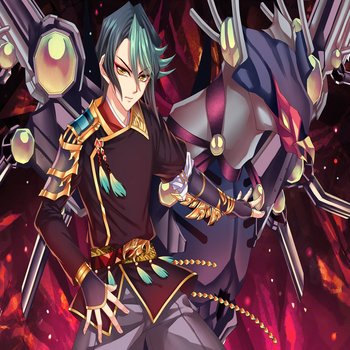 Shun Kurosaki, along with Yuto, is one of the survivors of the invasion on the Xyz Dimension, as well as a member of Resistance. Originally a kind, if a somewhat stoic person, the invasion took its toll on his psyche. What makes this worse is learning that the true reasons why his home was destroyed and his younger sister Ruri, being planned as a "sacrifice" along with his best friend Yuto, being intended to get killed off by The Professor. He later joins up with Ray as her "knight" to ensure the safety of his loved ones and to make Academia paid for their transgressions.

Shun uses a Raidraptor deck, which is made for swarming Winged-Beast-Type monsters to Xyz Summon monsters with low base-ATK, but powerful effects. He also has many Spell and Trap Cards that can counter various situations and exploits his Rank Up spells to evolve his Raidraptors into more powerful forms.

Four duelists from the Commons banded together to bring peace between them and the Tops. Jack was originally sent into the Friendship Cup to become King, but after he was influenced by Roget, his fellow Enforcers intervened and placed Yusei as the head, and the four to help heal the divide between the two classes.

Five duelists from the Synchro Dimension who came together after seeing Rin dueling Professor Frank and Akiza's Crimson Dragon mark on her arm, diving into the mysteries involving their dimension.

In General
Gill Randsborg
A duelist who hails from a legendary family of knights. He is the first to bring up the legend of Zarc and the Crimson Dragon to the Crusaders.
Dick Pitt (Grady)
A street duelist with a level head and a fondness for milk. He's the reconnaissance man who spies on Rin and Yugo about their powers.
Mr. Armstrong
A former member of Security who, despite not really interested in the magic and nonsense, decides to tag along since he's got nothing better to do.
Tenzin Yanagi
An eccentric archaeologist who travels the world gathering a museum of Duel Monster Cards and a fountain of knowledge in regards to the Crimson Dragon.
Carly Nagisa
A freelance reporter who is investigating the Arcadia Movement to find the whereabouts of her friend, Misty Lola's, little brother.

She also has a disguise as "Xavier Maxa", see tropes below for him.

Carly's identity when she dueled against Akiza in the underground tournament. Uses a Fabled Deck.

Divine
The leader of the Arcadia Movement. His organization offers a refuge for psychic duelists rejected by society but conducts experiments on people with psychic potential at the same time.
Akiza Izinski
Professor Frank
A scholar researching the phenomena of different worlds, hired by Divine to learn more about Rin. Unfortunately, he didn't learn anything but he did cause a lot of other people to become interested in this green-haired girl.

The Fusion Dimension's Duel Academia, who make it their life's mission of attacking other dimensions and sealing their victims into cards. A majority of people from this dimension are quite sadistic, treating their heinous actions as a "hunting game" and laughing about the destruction that they cause.

Ray's father, who three years ago went to the Fusion Dimension, where he became the Professor, the head of Academia. He is the instigator of the interdimensional war with the intent to conquer all dimensions and unite them under his command.

The Professor originally hailed from the Original Dimension where his technology gave Duel Monsters the ability to interact with reality itself, as well as invoking in them actual feelings. This backfired spectacularly when he inadvertently helped create the "Demonic Duelist" known as Zarc and the fusion of all his dragons... with his daughter Ray joining him as they declared war on humanity.

Thus the entire reason for starting the war in the first place is his ill-guided attempt to "unite" the dimensions once again and revive his daughter Ray, who he believes Zarc "corrupted" into joining him.

The Doktor is one of The Professor's closest aides. He is responsible for creating the Parasite Fusioners, to use them to control Yuzu, Serena, Rin, and Ruri.

A group of four Duelists from "different times" who battle against the recently transcendent Gods, Ray and Zarc. It led to the fracturing of the Original Dimension, along with the lives of them being sent throughout the Four Dimensions.
In General