Characters in Yuuna and the Haunted Hot Springs.

The male protagonist. An unlucky guy with extraordinary spiritual powers, but has a massive debt attached to his name due to a past ghost possession involving stock gambling. Kogarashi decides to stay at the Yuragi Inn until he's able to find out why a ghost named Yuuna has remained there instead of passing on to the afterlife. In the meantime, he attends Yukemuri High while working almost any job he comes across as a means to pay off his debt. 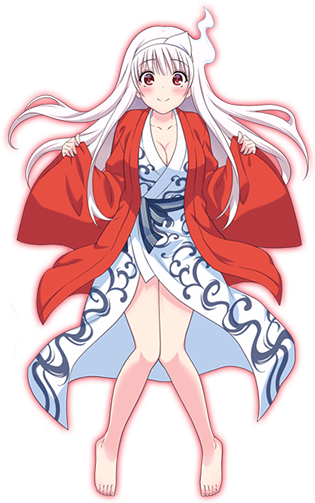 The titular character of the series. Yuuna is the ghost of a girl who died years ago and has remained stuck at Yuragi Inn ever since. The reason being that Yuuna is unable to remember what she wanted to do before passing on to the afterlife. 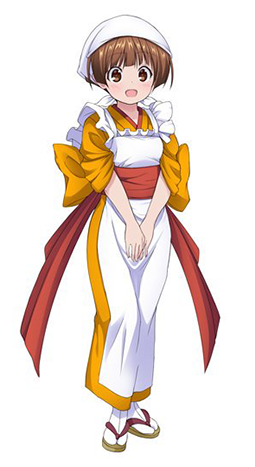 The innkeeper of Yuragi Inn. Chitose is a Zashiki-warashi.

A resident of Yuragi Inn. Despite appearing drunk most of the time, Nonko is actually a Mangaka, a former exorcist, and an Oni of the Yoinozaka clan.

A resident of Yuragi Inn. Sagiri is a demon-slaying ninja of the Ameno clan, as well as a student at Yukemuri High.

A Cat Girl resident of Yuragi Inn who is possessed by a cat god named Shiratama. Down the line, Yaya enrolls in Yukemuri High as a student one year younger than Kogarashi's class. 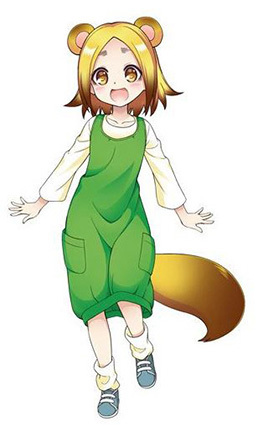 A young tanuki girl. Koyuzu was controlling Chisaki's stuffed animals at the latter's home in order to observe Chisaki's figure so that her transformation skills would develop further. After being discovered by Kogarashi, Koyuzu became a resident of Yuragi Inn since she had no home to return to.

The servant of the Ryuuga family. Born of the tail of the previous Black Dragon god, Oboro serves as Genshiro Ryuuga's assistant, bodyguard, and (relative) straight man. After Kogarashi rescued Yuuna and Sagiri from Genshiro, she becomes a resident of the Yuragi Inn in order to seduce Kogarashi to make a child with her since doing so would further strengthen the Ryuuga Clan.

Sagiri's cousin in the Branch House. Hibari sees herself as Sagiri's rival, and ends up falling in love with Kogarashi at the Ninja Festival when he saved her from two spirit ability users that were trying to take advantage of her. She would later become a resident of the Yuragi Inn, as well as a transfer student into Yukemuri High, in order to get closer to Kogarashi.

The owner of Yuragi Inn who's off traveling the world collecting peculiar items that she sends back to the inn. Kogarashi and company end up stumbling across some of these items during their stay at the inn.

Kogarashi's classmate in class 1-4. She had a supernatural problem and went to Kogarashi for help. She soon became friends with the residents of Yuragi Inn, particularly Yuuna (although she can't actually see Yuuna directly). 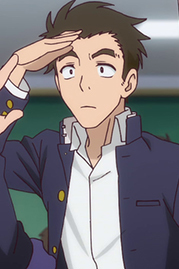 Kogarashi's classmate and best male friend in class 1-4. Satoshi has the distinction of being the only other known male that hangs out with the core group.

Sagiri's classmate in class 1-3 and her Mission Control in the demon slaying ninja army. 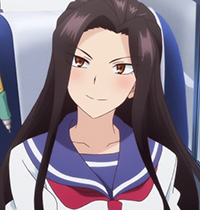 A classmate in class 1-4, and friend of Chisaki. Seri tends to hang out with the group that surrounds Kogarashi, and is often seen alongside Satoshi. 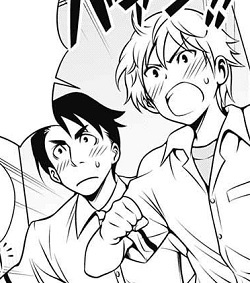 A pair of male students who go on the school sea-side trip with Kogarashi and company.

A former delinquent who admires Seri, and becomes Yaya's classmate when they enter high school. 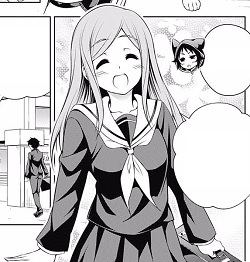 Yaya's friend from middle-school. The two end up together in the same class as Shion when they enter Yukemuri High. 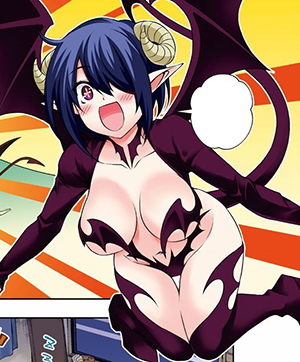 to see her succubus form
Voiced by: Manaka Iwami

The new homeroom teacher of class 2-4 that Kogarashi, Chisaki and Hibari attend after they became second years.

Chisaki's mother who serves as a Parental Substitute for Koyuzu. 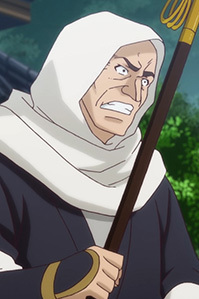 A monk priest from the demon slaying Gudon Mass organization. Sekkan only appears at the start of the series when he tried to exorcise Yuuna to the afterlife. 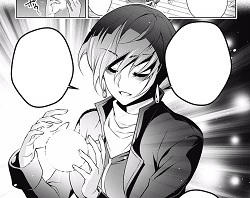 A Fortune Teller that Kogarashi and Yuuna meet while they're out on their pretend date. Ryuuzen uses her spiritual powers to look into Yuuna's past in order to figure out why the latter still hasn't passed on to the afterlife. 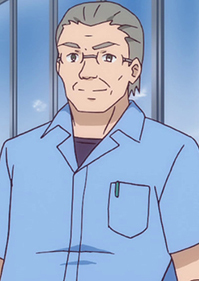 The principal of a middle school. He knew Chitose when he was just a child.

The cold, and strict, student council president of Rafine Girls Academy. Renge turns out to be a much different person than the school students initially viewed her to be, and was the one who accidentally released an evil spirit upon the academy. 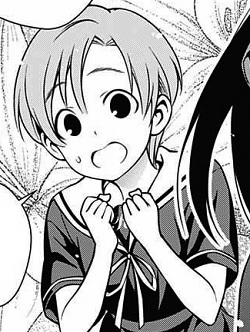 Chisaki's childhood friend, and the student council's secretary of the Rafine Girls Academy. Kokono seeks out Kogarashi to dispose of an evil spirit that has appeared recently at the academy.

The Black Dragon god of Shinano Dragon Grace Lake. The son of the previous Black Dragon god, Genshiro is first seen in the human world seeking women with great spiritual energy to take as wives. One of which ends up being Yuuna. 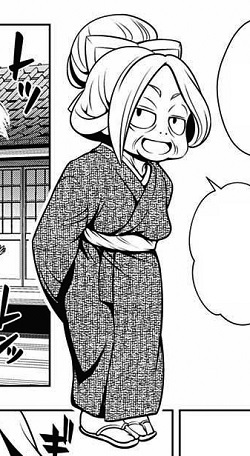 Sagiri's and Hibari's grandmother who lives at the Ameno household in the Demon Slaying Ninja Village.

A Tengu girl who is after Kogarashi. Karura claims that it was because he was her father's enemy, but in reality, she is in love with him, and results in her trying to force a marriage with him against his will. After the wedding ceremony falls apart, Karura changes her ways to get closer to Kogarashi the normal way, and goes about befriending the rest of Yuragi Inn.

A battle-hungry Nue girl who's a supporter of the Hiogi family, which makes her a close friend of Karura. Matora starts off as an enemy who supported Karura's forced marriage attempt, but like Karura, she winds up befriending the residents of Yuragi Inn after the wedding ceremony falls apart. As someone who loves to fight, Matora is usually seen trying to motivate Nonko to take on an Oni in a serious duel. 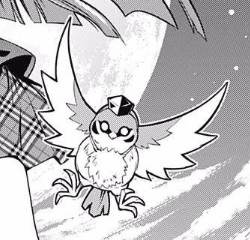 A sparrow Tengu who follows Karura. 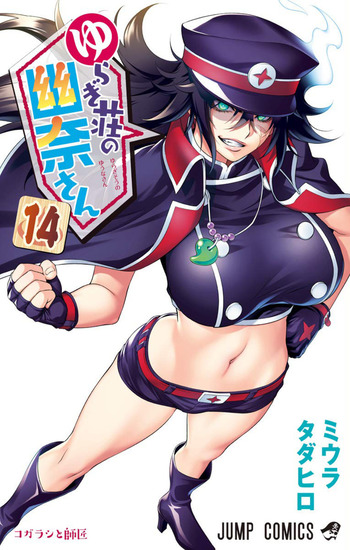 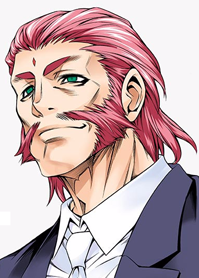 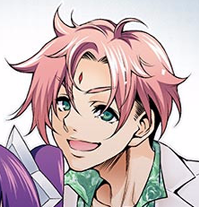 Nonko's younger brother. He wants to marry Sagiri through a political marriage. 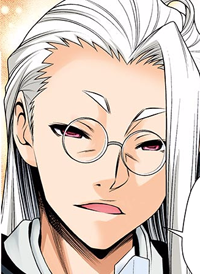 Founder of the Tenko Clan and a creator of Garandou that cost Ouga's life 100 years ago. 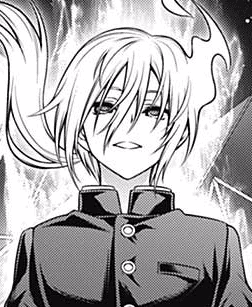 The current head of the Tenko clan. 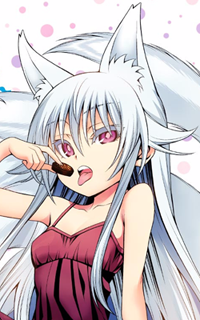 A young Youko girl and a member of the Eastern Forces that serve the Tenko Clan. She gets close to the Yuragi Inn because she knows of Yuuna's connection to the Tenko Clan. 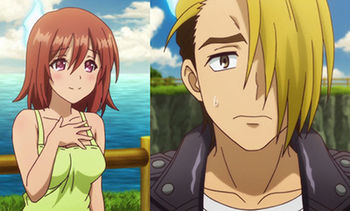 A pair of star-crossed loving ghosts that Kogarashi and Yuuna meet while vacationing at the beach with Nonko and Oboro. Ami and Yasuhisa have remained stuck on earth looking at one another from opposite cliffs until one finally decides to reunite with the other.