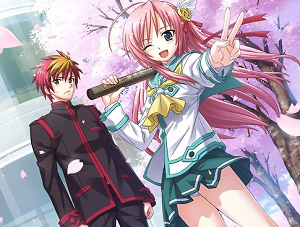 These are the main and secondary characters who appear in the Yumina The Ethereal.

Beware of SPOILERS, particularly after the "Supporting Characters" section.

"No way you're dragging me into this!"

The hero. A young man doomed to clean up Yumina's messes. After joining the Debate Club together with Yumina, he finds himself the club's errand boy - scouting opponents, guarding the candidate, and generally doing whatever Kirara tells him to. Ayumu has few memories of childhood and no knowledge of his parents. He was raised by a man named Akashima Takehito, who subjected Ayumu to a harsh regimen of martial arts and survival training. One day, Takehito revealed the purpose of Ayumu's training. He was to enter Jinbu Academy and protect Midorishita Yumina, a girl whom Takehito claimed would one day save the world. Little did Ayumu know that he would first have to save Yumina from her own bad grades. His elemental color is red. 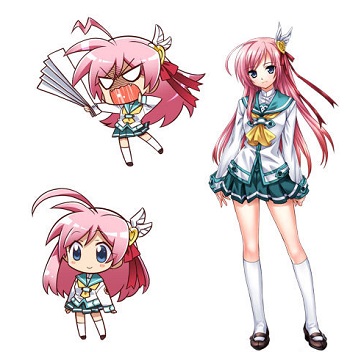 "It's like the whole world is out to get me!"
Voiced by: Keito Mizukiri

The main heroine. Due to a failed test and a history of bad grades, she will have to repeat the second year unless she can become student council president, a position that comes with the power to change any school rule. Led by Kurokawa Kirara, she charges towards the one bright spot in a dark and dismal future. Yumina is a friendly and cheerful girl with stunning good looks. She does have more than a few screws loose, however, and completely fails to live up to her ideals of modesty, competence, and efficiency. In her quest to become student council president, she will face many passionate rivals and harsh challenges. How will the experience change her? Will she ever make the third year? Her elemental color is green. 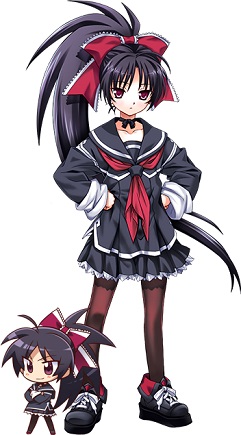 The mastermind behind Yumina's candidacy. She clearly has her own reasons for supporting Yumina, but she's not about to reveal them. Her diminutive figure belies a powerful ego, and she often uses cunning ploys and underhanded tricks to lead the Debate Club to victory. No one can tell what she's really thinking at any given moment, but she is often seen wearing a dark and dangerous smile. While few people would call themselves her friend, she does seem to have a vast network of contacts throughout the academy, a fact which only adds to the mystery surrounding this strange girl. Her elemental color is black.

"I look forward to working with you all."
Voiced by: Asami Imai

An eccentric girl who transfers to Jinbu Academy shortly after the Election War begins. Despite her spotless record and glowing letters of recommendation, she decides to join the underdogs of the Debate Club. While glad of the boost to their strength, the other members wonder at her motives. She does seem to be interested in a certain someone... She claims to be an average girl born and raised in the heartland of Japan, but it is obvious from the things she says and does that there's something very off about this girl. Loyal to her desires, Ai always eats and plays to the fullest. When something grabs her interest, rest assured that she will pursue it no matter what stands in her way, often dragging other people (usually Ayumu) along for the ride. In contrast to her doll-like appearance, she shows incredible athletic ability. Her elemental color is blue.

"I'm starting to understand what you meant, Akashima-san."
Voiced by: Noriko Rikimaru

A shy, mild-mannered girl who loves to read books and take care of the school library. At Jinbu Academy, where athletics are king, culture clubs like the Library Committee occupy the bottom of the social pecking order. Even so, Maino works hard to make the voices of the minority heard across campus. She recognizes her lack of self-esteem and hopes to become more confident through the campaign. Her goal is an academy where all students are equal. 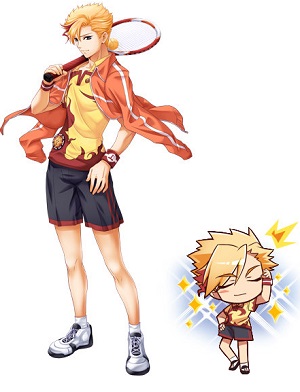 "The weak must serve the strong! In other words, me!"
Voiced by: Kentaro Ito

One of Yumina's rival candidates, and the very person whose vote of no confidence kicked off this Election War. The leader of the Sports Clubs Alliance, Rei is a charismatic young man whose Casanova charm and dashing good looks have earned him the admiration of a large segment of the academy's female population. His fan club's membership is in the triple digits. Rei is not only enormously popular, he is also a first-rate tennis player who has led his team twice to victory in the national championships. Although he is considered one of the strongest contenders for student council president, some worry that he seems awfully fond of his little sister... 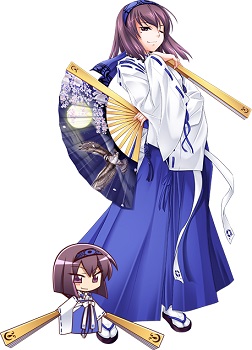 "Pathetic. You should drop out before you embarrass yourself."
Voiced by: Harumi Sakurai

A second-year student, Youko is Sakaue Tsukuyo's twin sister and the vice-chair of the Shrine Maiden Committee. Her personality is the exact opposite of her sister's, forceful and outgoing. Has strong beliefs and is willing to use others to achieve her goals. It was Youko who proposed the formation of the Shrine Maiden Committee, and her drive that made it possible. While Tsukuyo remains secluded in the commitee's shrine, Youko works tirelessly to expand the committee's influence over the student body - though to what purpose, no one knows. 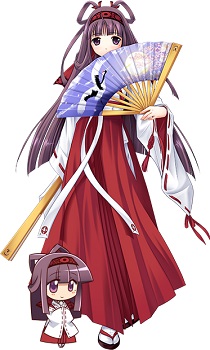 "I love to watch the sun set. It's always so...beautiful."
Voiced by: Koharu Satomi

A second-year student at Jinbu Academy, Tsukuyo is the quiet and mysterious chairwoman of the Shrine Maiden Committee. Wears traditional shrine maiden clothing instead of the standard issue academy uniform. The Shrine Maiden Committee is a newly-formed organization that administers all events of religious significance inside the academy, and Tsukuyo became its first chairwoman when she was only in her first year. She is rarely seen out in public, instead spending most of her time in the committee's shrine. Has many zealous worshippers even outside the committee. They claim to be drawn to some mystical power she is said to possess.

"Your uniform is quite untidy. Didn't I warn you about this last week?"
Voiced by: Shizuka Ito

The current student council president, Nayuta practically embodies the word "extraordinary", far outstripping the rest of the student body in both beauty and brains. Her regal, some would say imperious demeanor seems only natural coming from someone so gifted. This high-handedness has earned her the passionate support of those with certain... specialized tastes. She declared an Election War and brought down the previous Student Council President when she was still only in her first year. Ever since, she has reigned unchallenged. The quintessential autocrat, she believes that the masses cannot be trusted with freedom and must be ruled by the firm hand of a capable leader. 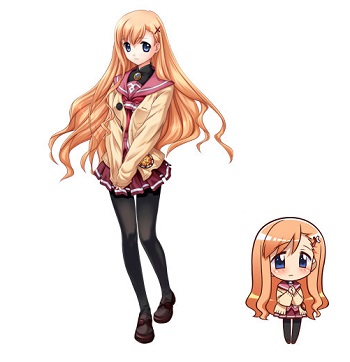 "Let's all try to have a good time, okay?"
Voiced by: Natsumi Yanase

A second-year student, and Ayumu's classmate. Tomori is a kind and gentle girl who also happens to be Rei Hinomiya's younger sister. She and her brother are said to be quite close. Friends with Yumina since they entered the academy together, Tomori has been instrumental to Yumina's advancement. Without her help, Yumina would never have made it to second year. While she does not take part in this election's debate battles, she does provide support for Yumina and the rest of the Debate Club. Tomori has never had a boyfriend. This is due in large part to the fact that attempts to get close to her are invariably met with violent interference from an unknown third party. 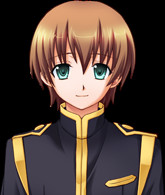 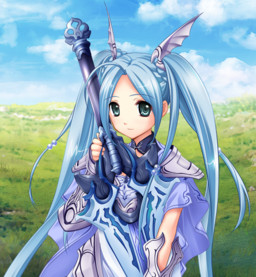 A resident of Tilscied, the virtual reality world and training simulation into which Kirara sends Yumina and friends, Veridadia is a royal knight of Midorstan whose honest and likable personality quickly endears her to the Debate Club crew. She does, however, have a tendency towards self-effacement, believing herself to be immature and inexperienced. Her sword is larger than she is, but because it is part of her, she wields it easily. 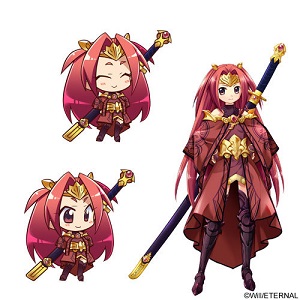 The first princess of Midorstan and a good friend of Kirara.

Yupcilla's loyal butler, who can always be found at his mistress's side, ready to defend her against any and all enemies. A charming young man who never drops his warm smile, Gunumio also displays formidable prowess in combat. The scar on his face no doubt has a story behind it, but Gunumio isn't telling. 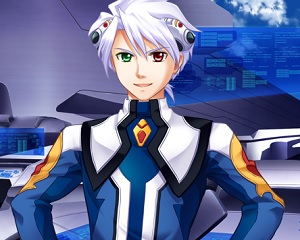 The commanding officer of the Zelerm and Captain Izel's right-hand man. 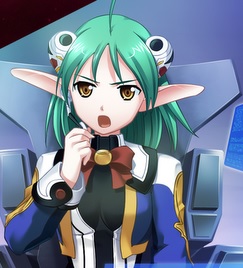 The communications officer of the Zelerm. 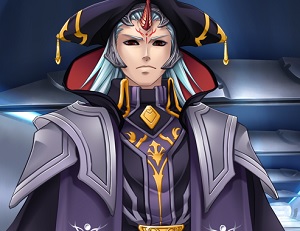 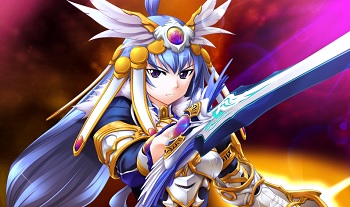 Billed as the "strongest ethereal in the galaxy" since the disappearance of Karales. 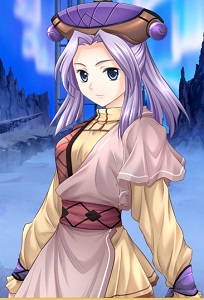 A mysterious woman who the party meets upon landing on the surface of Algoda.

The "hero of Algoda" and the strongest ethereal in the galaxy at the time of his disappearance 20 years ago. 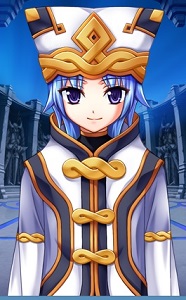 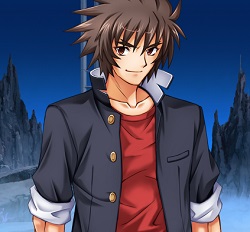 Ayumu's adoptive father. Subjected Ayumu to a harsh training regimen and instructed him to find Yumina Midorishita and protect her at all costs. 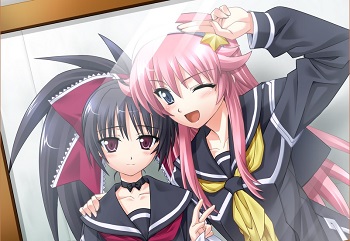 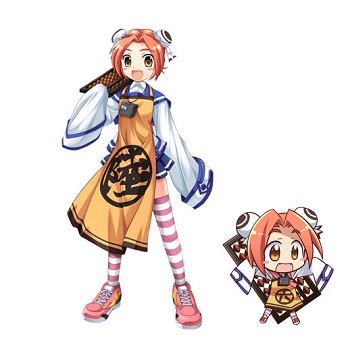 The cute and lively girl who runs the school store, which buys and sells everything from stationery and uniforms to weapons, armor, and otherworldly grimoires.

The "true" final boss of the game. After Karales is defeated, the Barais universe moves to merge with ours, essentially erasing everything in ours from existence.