YuYu Hakusho Main Character Index
Team Urameshi | Supporting Cast | Allies | Main Antagonists | The Three Kings | Other Dark Tournament Participants | Other Characters
Important Note: “Team Urameshi” refers to our four principal heroes as Yusuke’s default detective mission unit, and NOT by the Dark Tournament team formation which included Genkai. Due to being Troperiffic, tropes related to Team Urameshi as a whole or to individual members thereof should go on this page.
Advertisement:
open/close all folders
General 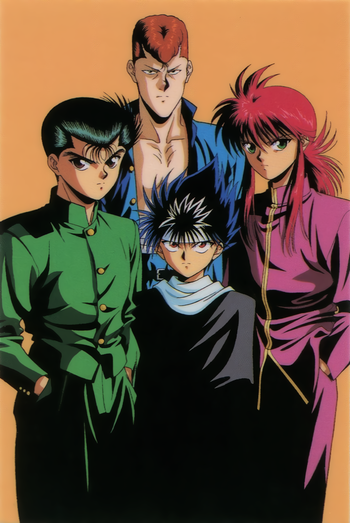 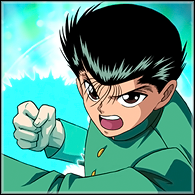 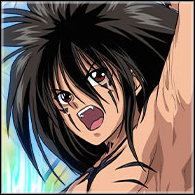 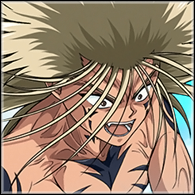 A delinquent jerk who dies in a tragically ironic manner: saving a child from being hit by a car. It gets even more tragically ironic when he is informed that not only did The Powers That Be never expect such an act of goodness from him, the kid would have survived anyway, without a scratch. Yusuke pushing him out of the way just gave him a few extra scrapes.

Since there's no place for him in Heaven or Hell, Yusuke is given the opportunity to return to life, but once he does — Koenma owns him, and he becomes the Spirit Detective, taking care of supernatural problems that might threaten ordinary humans. Of course, as we gradually learn, Yusuke isn't all that ordinary, himself... 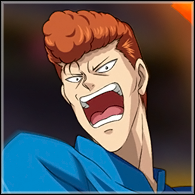 "When men do what they're supposed to do, it's not always about what they want."
Species: Human Psychic
Powers: Spirit Sword

Yusuke's rival-turned-best friend, Kuwabara is slightly jerky himself, but still easily the nicest of the four main characters. Kuwabara has a very powerful sixth sense, which he doesn't seem to enjoy, and is able to manifest his reiki (spirit energy) like a sword. Definitely something of a comic relief character, he falls in love with the ice demon, Yukina, and is utterly devoted to her. Kuwabara is the only full-blooded human of the main four.
Kurama/Shuichi Minamino 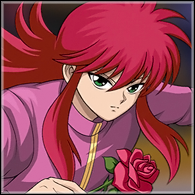 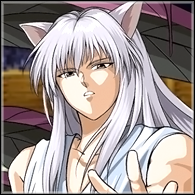 "You should know better than to corner an animal like a fox... We have a tendency to show our teeth."

Kurama is an over-1000-year-old fox demon and former thief shot near the brink of death by a demon hunter. Unwilling to die, he forced his soul out to swim into the human world and merged with the fetus owned by the nearest pregnant woman he could spot, Shiori Minamino, and was reborn as her son, Shuichi Minamino.

Kurama was eventually targeted by the Spirit Realm upon him resurfacing his thievery practice. But due to his willingness to surrender his actions, Kurama was sentenced to parole, and The Spirit Realm offered to have his criminal records waived if he were to aid Yusuke in his Spirit Detective investigations.

Personality-wise, Kurama is outwardly kind, cryptic, intelligent, and not above teasing Yusuke or Hiei mercilessly (sometimes with Kuwabara's help). That is if you are on his good side. If you're on his bad side... time to start praying that he'll at least be merciful enough to make your death quick. 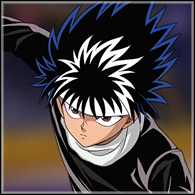 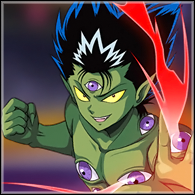 "I know as much of games as I do of hugs and puppies, and care for them even less. Wake me for the end of the world."
Species: Fire Demon- Yuki Onna hybrid
Powers & Discipline: Super speed, Sword, Jagan, Flame Manipulation.

An aloof and elusive swordsman from the Demon World. Hiei possesses a surgically implanted third eye that endows him with several abilities such as mind control, telepathy, and telekinesis. Hiei is a fire demon and is capable of manipulating the human world's crimson flames as well as the demon world's dark flames. He is taciturn and misanthropic, and the only being he cares about other than himself seems to be his twin sister, Yukina. Hiei was the ringleader of the theft that led to Yusuke meeting him, Kurama, and Gouki. Unlike Kurama, Hiei had no good intentions, but like Kurama, part of his sentence is to assist Yusuke and Koenma. Eventually, he does come to respect Yusuke as a friend and warrior, although he usually won't help without a good pretext.