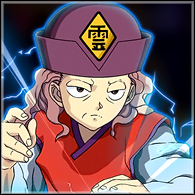 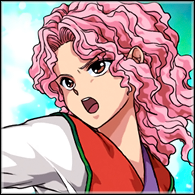 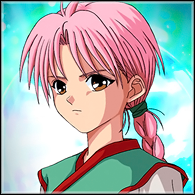 "I fight to get what I need, and I kill whoever gets in my way. I always have."
Species: Human Psychic
Powers: Spirit Wave
Voiced by: Hisako Kyoda (Old Age) and Megumi Hayashibara (Youth) (JP), Linda Young (EN-Funimation dub), Candice Moore (EN-Animax dub, older), Andrea Kwan (EN-Animax dub, younger), Caryl Marder (EN-Central Park Media dub of Poltergeist Report), Ana Orra (SP-series and movies), Enriqueta Linares (SP-first dub of Meikai Shito Hen), Belinda García (Latin America-TV series and Bonds of Fire/Poltergeist Report), Caterina Iochira (Old Age) and Irene Scalzo (Youth), (IT)
The Old Master of the martial art: "Reikou Hadouken (Spirit Wave)", Genkai is a legendary human psychic first seen holding her succession tournament in choosing an apprentice to pass on her power. With Yusuke's unexpected victory to her succession rights, she becomes his mentor, and is determined to beat skill into him even if he doesn't want it. Unknown to everyone (though not above suspicion), she's also the fifth masked fighter for Team Urameshi during the Dark Tournament. Has something of an interesting past with the younger Toguro brother.
Advertisement:
Keiko Yukimura 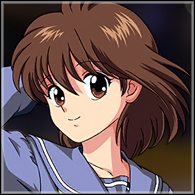 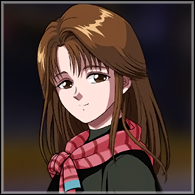 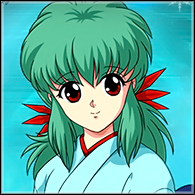 "Go Kuwabara! You can do it!"
Species: Yuki Onna -Fire Demon hybrid
Powers: Healing Hands, Ice Manipulation
Voiced by: Yuri Shiratori (JP), Jessica Dismuke (EN-Funimation dub), Veronica Taylor (EN-Central Park Media dub of Poltergeist Report), Marta Estrada (SP-first part of the series), Carmen Calvell (SP-rest of the series and movie), Aurora Ferrándiz (SP-first dub of Meikai Shito Hen), Azucena Martínez (Latin America-TV series and Bonds of Fire/Poltergeist Report)
A Yuki Onna and the object of Kuwabara's affection, Yukina is Hiei's twin sister, a fact lost on Kuwabara and Yukina herself. She was kidnapped and kept imprisoned for a time by Tarukane for her tears, which can transform into tear jewels that can fetch a high price on the black market.
Atsuko Urameshi 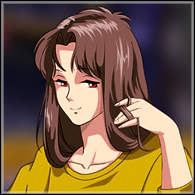 "No one gave you permission to die! You got hit by a car, strong people live through that!"
Species: Human
Voiced by: Yoko Soumi (JP), Meredith McCoy (EN), Gloria García (SP), Patricia Mainou (Latin America-TV series), Patrizia Salmoiraghi (IT)
Yusuke's alcoholic mother, unaware of his Spirit Detective job in the anime.

In the manga, she's considered part of the principal cast alongside Keiko and Shizuru and is a spectator at the Dark Tournament and some of the early Sensui fights. 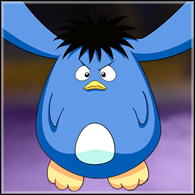 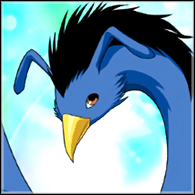 Species: Spirit Beast
Abilities: Psychic link with Yusuke, communication medium for Genkai.
Voiced by: Yuri Shiratori (JP), Justin Cook (EN), Ariadna Jiménez (SP), Bernardo Rodríguez (Latin America-TV series), Stefania Patruno (IT)
A Spirit Beast who hatched from an egg given to Yusuke by Koenma. Its form was based on the reflection of Yusuke's mentality.
Advertisement:
Hinageshi 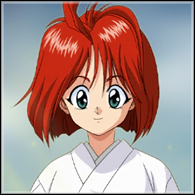 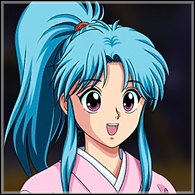 "Now I understand what kind of person you are; it's in my guidebook! Rather than be scared or surprised, you yell a lot and tell me I don't know what I'm talking about."
Species: Spirit Being
Position: Shinigami
Powers: Healing Hands
Voiced by: Sanae Miyuki (JP), Cynthia Cranz (EN-Funimation dub), Sarah Hauser (EN-Animax dub), Lia Sargent (EN-Media Blasters dub of The Golden Seal), Veronica Taylor (EN-Central Park Media dub of Poltergeist Report), Noemí Bayarri (SP-series and movies), Miriam Guilimany (SP-first dub of Meikai Shito Hen), Adriana Rodríguez (Latin America-TV series and Bonds of Fire/Poltergeist Report), Federica Valenti (IT)
Chief ferry girl across the River Styx, Botan is the perky Shinigami sent to retrieve Yusuke's soul after his unexpected death. She initially serves as his guide back to life and becomes his assistant upon his appointment as Spirit Detective.
Koenma 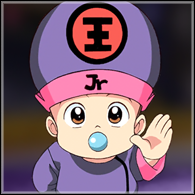 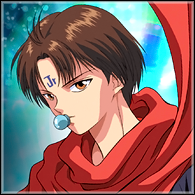 , Koenma resurrects Yusuke and employs Yusuke as a Spirit Detective to aid him on criminal investigations between different realms on Earth.
Jorge Saotome 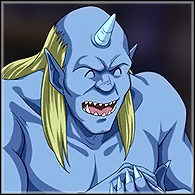 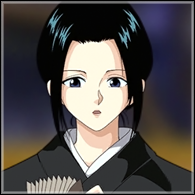 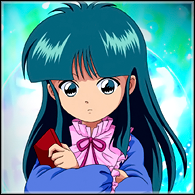 Species: Spirit Being (Former Human)
Position: Human Realm Investigator
Voiced by: Yuri Shiratori (JP), Susan Huber (EN)
Sayaka was a girl who died young but wasn't able to go to heaven due to being struck by her own intense feeling of loneliness. She encountered Yusuke (while he was still lingering as a spirit) and Botan for illegally dragging a living boy's spirit out to play with her. After solving her problems, she tags along with Yusuke to detect humans who are either being targeted by unwanted spirits, or humans being cursed with life-threatening spells. Out of curiosity, she tracks Keiko Yukimura to see whether she truly loves Yusuke for who he is. Once Sayaka is satisfied with the outcome of those she cared about, she was sent to the Spirit Realm by Botan.

In the anime, Sayaka gets promoted as an investigator for the Spirit Realm responsible for keeping track of persons related to specific cases. She only appeared in Episode 4 to watch, and report to Koenma on Yusuke's character to see if Yusuke is cleared to be brought back to life. 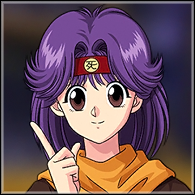 Species: Spirit Being
Position: Shinigami
Voiced by: Naomi Watanabe (JP), Meredith McCoy (EN)
A good friend of Botan who drops by to say “Hi” between work. Her job is to go before the personnel of Botan's division to give out death sentences to people who are about to die.