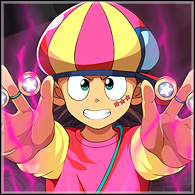 "I know a fun new game. I'll throw my yo-yos and you try to stay alive."
Species: Demon
Powers: Serpent Yo-Yos
Voiced by: Reiko Kondo (JP), Eriko Matsui (JP, 100% Maji Battle), Kimberly Grant (EN), Adriana Rodríguez (Latin America, TV series), Patrizia Mottola/ Federica Valenti (IT)
Rinku is a young demon who uses yo-yos to attack. Rinku is childish and playful, and often annoys those around him. He controls his yo-yos by channeling his aura through the strings. During the fight for control of the Makai, Rinku is one of the demons that Kurama trains to fight for Yomi, though they eventually all disband to fight individually in the Makai tournament. At the end of the manga, he becomes stricken with Sasuga, a female demon who defeated him in the Makai Tournament, and it is hinted that they are in a relationship together.
Chu 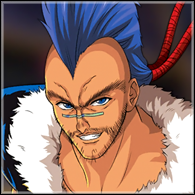 "Right! Before we get this thing started I just want to say I'm a great guy and the only thing I suck at is Rock, Paper, Scissors!"
Species: Demon
Powers: Drunken Fist
Voiced by: Norio Wakamoto (JP), Kent Williams (EN), José Sosa (Latin America, TV series), Massimiliano Lotti/ Marcello Cortese (IT)
Chu is the strongest fighter and leader of team Jolly Devil Six, but ends up as the team alternate after losing at Jan-ken-pon. Chu specializes in the "Drunken Fist", which fuses the alcohol he drinks with his aura. During the fight for control of the Makai, Chu is one of the demons that Kurama trains to fight for Yomi, though they eventually all disband to fight individually in the Makai tournament. At the end of the manga, he begins training with, and falls for, Natsume, the female demon who defeated him in the Makai tournament. 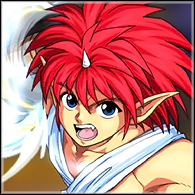 "I thought I was crazy, Urameshi, but you take the prize!"
Species: Demon
Main Power: Wind Manipulation
Voiced by: Kappei Yamaguchi (JP), Jerry Jewell (EN), José Sosa (Latin America, TV series), Luca Bottale/ Paolo Sesana (IT)
Jin is a demon with mastery over the wind. This grants him the power to fly at great speeds. His signature move is to spin his forearm at high speed, creating a tornado around it, making his punches more powerful, even causing damage when he misses. He enjoys his battles, especially when he has a worthy opponent. He states that when he gets excited about a fight his ears twitch. During the fight for control of the Demon World, Jin is one of the demons that Kurama trains to fight for Yomi, though they disband to fight individually in the Demon World tournament.
Toya 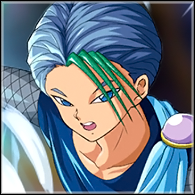 "The Shinobi have done their job for centuries, and done it well. But in recent years, we have caught glimpses of the outside world, and asked; 'Why not us?' Have we not earned the privilege others take for free?"
Species: Demon
Main Power: Ice Manipulation
Voiced by: Yasunori Matsumoto (JP), Daniel Katzuk (EN), José Gilberto Vilchis (Latin America, TV series), Patrizio Prata/ Irene Scalzo (IT)
Toya is the ice master of the shinobi of the Spirit World. During the fight for control of the Makai, Toya is one of the demons that Kurama trains to fight for Yomi, though they eventually all disband to fight individually in the Makai tournament.
Advertisement: 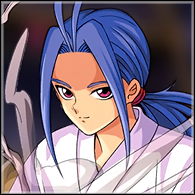 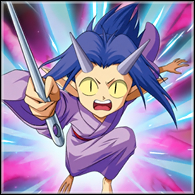 "Well, I think the end of the world would have to make a bit of noise."
Species: Demon
Main Power: Shapeshifting / Banshee Shriek
Voiced by: Toshiyuki Morikawa (JP), Christopher Bevins (EN), José Germán (Spain), Alan Miró (Latin America, TV series), Luca Bottale (IT)
Shishiwakamaru is a tiny imp demon who can transform into a full human appearance. He is a swordsman who seeks to make himself famous. Suzuki gives him the Sword of Trials, a sword hilt that changes into whatever weapon suits the wielder. For Shishi it becomes the Banshee Shriek, a sword which channels the souls of the dead and materializes them to devour his opponent. During the fight for control of the Makai, Shishi is one of the demons that Kurama trains to fight for Yomi, though they eventually all disband to fight individually in the Makai tournament.
Suzuki 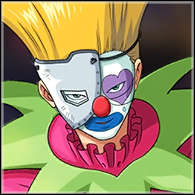 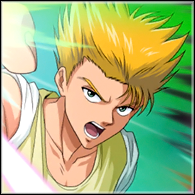 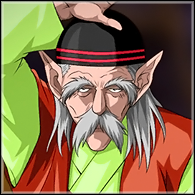 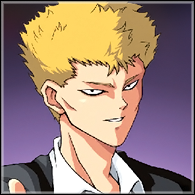 "You've made a lot of friends and enemies, Yusuke, and now we're doing one of them a special favor."
Species: Human Psychic
Main Power: Shadow
Voiced by: Takehito Koyasu (JP), Ethan Rains (credied as Iman Nazemzadeh) (EN), José Gilberto Vilchis (Latin America, TV series), Lorenzo Scattorin (IT)
Asato Kido is the leader of three Psychics who successfully kidnaps Yusuke at the beginning of the Chapter Black arc; who can be defined by his long eyelashes and bright blonde hair.

His ability, "Shadow", allows him to step on someone's shadow and incapacitate them for as long as the victim's shadow is in his reach.

Along with Yuu Kaito and Yanagisawa, he seeks the aid of Genkai when his powers manifested. It is shown that he also has limited control over his own shadow, using it to spell out his attackers name after he is paralyzed by Doctor. In his final manga appearance, Kido is shown to have been stood up by his date in a cinema while the narration says he is far too forgiving. 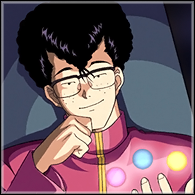 "I drew this by hand. And yes. It IS to scale."
Species: Human Psychic
Main Power: Taboo
Voiced by: Issei Futamata (JP), Jakie Cabe (EN), Ikaro (Latin America, TV series), Renato Novara (IT)
Yuu Kaito is the second of three Psychics who plotted to kidnap Yusuke at the beginning of the Chapter Black arc. He is a student, and fellow schoolmate with Kurama (Shuichi) at Meioh Private Academy where he's known to compete alongside Kurama for best grades of their school year. He is a talented linguist, has authored several books and enjoys word puzzles.

His ability is "Taboo" which allows him to create word games that those within his territory must adhere to or their soul will be extracted from their body.

In the manga, his last appearance shows him spending his day off with his girlfriend mostly playing video games and writing. 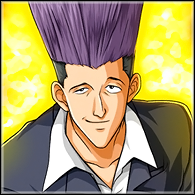 "So you picked my pocket with some greenery? You really are a first class freak!"
Species: Human Psychic
Main Power: Copy
Voiced by: Mitsuaki Madono (JP), Travis Willingham (EN), José Sosa (Latin America, TV series), Paolo De Santis (IT)
The third and final of the Psychics that kidnap Yusuke.

His power is "Copy" which allows him to copy the appearance, memories, attributes, abilities, and spirit print of anyone he touches. In his last appearance in the manga, he is too shy to ask an attractive girl out, and it is revealed that ten years later, he marries the girl that tries to cheer him up. 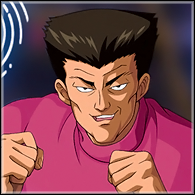 "I don't have any heroic aspirations. I'm much more interested in starting my fighting career."
Species: Human Psychic
Main Power: Tapping
Voiced by: Nobuaki Fukuda (JP), Sean Schemmel (ENG), Marco Aguileta(Latin America, TV series), Diego Sabre (IT)
Murota is a human who develops physic powers as a result of the demon plane hole opened by Sensui. He is recruited by Yusuke, Genkai, Kido and Yana when they arrive in Mushiyori City, using his abilities for Team Urameshi to gather information on the Sensui Seven. His power is Tapping, which allows him to read the minds of anyone in a 30 mile radius. He's eaten by Gourmet after Kuwabara was captured.
Since The Three Kings Saga
The Satou Family 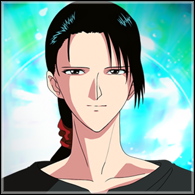 Species: Human Psychic
Voiced by: Kazuko Yanaga (JP), Gwendolyn Lau (EN)
The first Spirit Detective hired by Koenma who retired for marriage. By the referral from Genkai, Yusuke visits her in seeking for some Sempai/Kōhai experience talk. 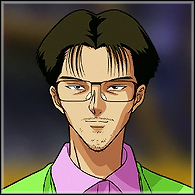 Species: Human
Skills: Fortune telling
Voiced by: Ken Shiroyama (JP), Duncan Brannan (EN)
The husband of Kuroko, and father to Kaizei and Fubuki. Shougo is a novelist with a keen gift for fortune telling. He's in on his wife's past as a Spirit Detective, and is shown to be respectful to everything involving the realms between the Human, Spirit, and Demon Realms. He's implied to incorporate stories from his wife's experience as a Spirit Detective into his novels.

Species: Human Psychic
Voiced by:
[Kaizei] Urara Takano (JP), Alison Retzloff (EN)
[Fubuki] Ikue Otani (JP), Kate Bristol (EN)
The children of Kuroko and Shougo both inherited spiritual powers from their mother. Despite being brother-and-sister who have aged one year apart, Kaizei and Fubuki are as close as twins.
Hokushin 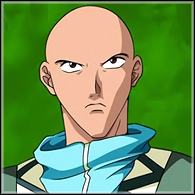 "You are my king now! I am sworn to protect you!"
Species: Demon
Powers: Body Manipulation
Voiced by: Kenyū Horiuchi (JP), Jerome 57 (EN; Original), J. Michael Tatum (EN; Blu-ray), Claudio Romero (Latin America, TV series), Gianluca Iacono (IT)
Raizen's second-in-command. He first appears to offer Yusuke the chance to go back to demon world to train and take over Raizen's position if he dies. Impressing Yusuke in a fight, Hokushin goes back to demon world waiting for Yusuke's arrival so they can get to training. When Yusuke arrives, he begins training and preparing him towards his true destiny.
The Nine Friends of Raizen
Raizen's pack of friends who would meet up together for brawls through centuries. These friends live as hermits and secluded themselves away from the politics of demonic society. The pack came out to pay their respects upon hearing of Raizen's death, and agreed to partake in Yusuke's proposal of The Makai Tournament to elect a new ruler for the demon realm. This pack is rumored to have potential of surpassing both Mukuro and Yomi of the Three Kings in demonic strength. 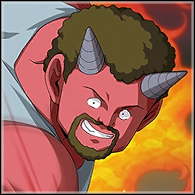 Voiced by: Shōzō Iizuka (JP), Jay Jones (EN), Tony Fuochi (IT)
The head of Raizen's pack of friends, and the husband of Kokou.

By the ending of the Makai Tournament, Enki came through as the winner of the tournament, and is installed as Ruler of the Demon Realm post disbandment of The Three Kings.

In ending arc of the series, Yusuke calls Enki up to request for Hiei's aid in disbanding the Sei-Sei Shinto. 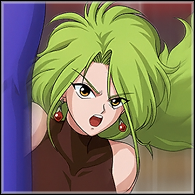 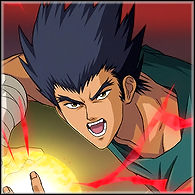 Voiced by: Mitsuaki Madono (JP), Donnie Franks (EN)
The twin brother of Natsume. He was Touya's opponent during the preliminary round, and second round (anime ver.) of the Makai Tornament, then won against Kurama in the third round, then lost the semi-finals against Saizou. 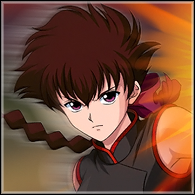 Voiced by: Shinobu Satou (JP), Meredith McCoy (EN), Araceli Ramírez (Latin America)
The twin sister of Kujou. She was Chu's opponent during the preliminary round of the Makai Tornament, but lost to Mukuro on the second round.

Voiced by: Jurota Kosugi (JP), Dameon Clarke (EN)
Jin's opponent during the second round of the Makai Tournament.