Characters / You and Me and Her 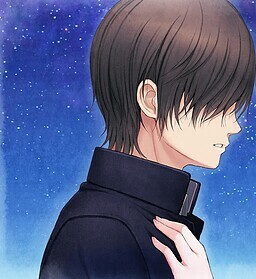 The protagonist of the game. A guy that prefers to not stand out and indulge himself in his daily routine. That is, until he meets Aoi in the roof. 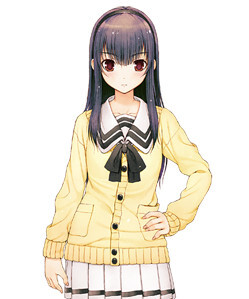 The school idol who's gifted in both wits and beauty. She is in the Theatre Club, where she shows off her outstanding acting skills.

Among Miyuki's vast array of talents, batting is one of them. She's rarely seen without her bat, and can often be found at the town's local batting center practicing her swings. Unsurprisingly, wherever Miyuki goes her bat isn’t too far from her. Although, there are suspect rumors involving it...
She's not the idol everyone and her mother makes her out to be. As Miyuki is someone who’s accustomed to acting and hiding their true face, Shinichi is the only one who can see right through it. She can get miffed all too easily behind closed doors, and is something of a tsundere.

After acquiring Aoi's phone, she goes insane after she realises her existence as a romance game character and chooses to try hijacking the game by deleting Aoi from existence so she and the player can always be together. She is thus the central antagonist of the latter half of the game. 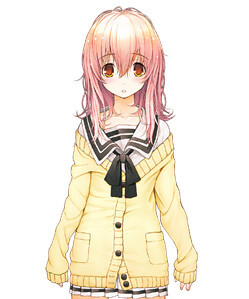 A mysterious girl that spend her time on the school roof trying to contact "God". She thinks the entire world is a game and that she and Miyuki are "visual novel heroines." Poor at socializing, both Shinichi and Miyuki feel like she's unable to draw a line between reality and visual novels, having them seamlessly merge.

She is actually an avatar of God, sent into the game world to acquire CG's before disappearing from existence. Due to a glitch however, she ended up developing human emotions and feelings that lead to her genuinely attempting to stay as her own entity...even if it cost her everything.

Shinichi's classmate and self-proclaimed 'Captain' of the Boys and Dreams Club. Yuutarou is an overly-passionate individual who believes in the pursuit of dreams as the ultimate purpose in life, often having emotional outbursts at every turn of events to Shinichi's dismay.

However, he's quick to get serious when the situation calls for it, showing a caring and supportive side for Shinichi when he needs it most.

Miyuki's kouhai and a fellow drama club member who is shy and timid, but has excellent acting skills.

He is actually Akebono Ryuujirou, Yuutarou's cross-dressing younger brother who had been roped into preforming in the drama club, as well as Aoi's paramour.

A stray cat Aoi picked up and named. She claims it's a "transceiver cat" due to the lightning symbol on its forehead.

A mysterious voice that communicates with Aoi through her cellphone. Actually a sentient otherworldly consciousness that projects female avatars into game worlds so to acquire H-CG's, which created Aoi with this goal. It has the power to hijack, edit and alter the properties of game worlds it interacts with.

The player of the game controlling Shinichi, and actual protagonist of the story. Both Aoi and later Miyuki are aware of their existence, and end up communicating regularly with them after The Reveal as they try to save Aoi.