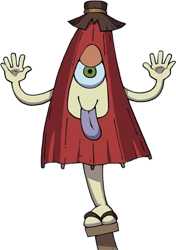 An umbrella spirit of the Heartful Tribe and one of the first Classic Yo-Kai that Nate meets. 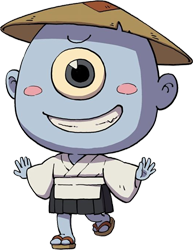 A cyclops Yo-Kai of the Charming Tribe and one of the first Classic Yo-Kai that Nate meets. 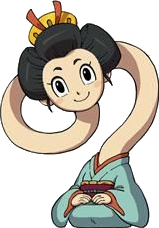 The long-necked Yo-Kai of the Slippery Tribe that is one of the first Classic Yo-Kai that Nate meets. 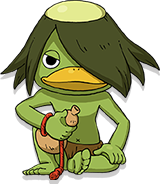 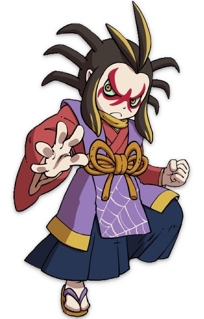 The leader of the Bony Spirits faction, he is a Giant Spider who can shapeshift into a human form. 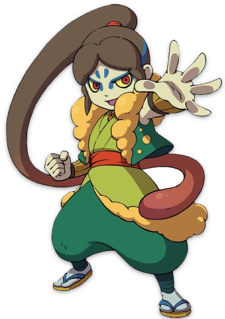 The leader of the Fleshy Souls faction, he is a giant toad who can shapeshift into a humanoid form. 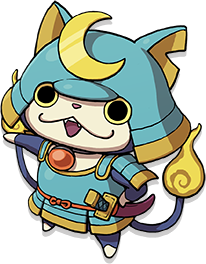 A legendary Yo-Kai who is apparently Jibanyan's ancestor. 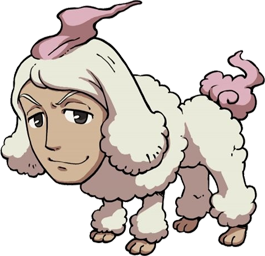 The second legendary Yo-Kai that Nate summons. He was once an attractive man until he was crushed under wooden planks next to a pink toy poodle. His powers come from his good looks, and he can give those good looks to those he inspirits. 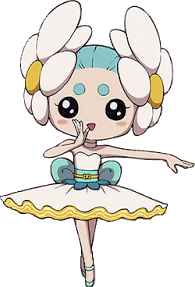 A Yo-Kai that inspirit people by dancing above their heads, causing them to leak information and... Spoiler others.

A Yo-kai who causes people to spout pointless trivia. He Inspirits people by using a turquoise-colored poo on a stick.

A group of 5 S rank Yo-kai that are in charge of inspiriting large groups and communities of people with their lackeys. They seem to compete with each other for Dedtime's favor like a business, being ranked for their progress of their possessions.

Tropes that apply to all of the elites:

The first of the elites to be taken on, Unfairy fights both Toadal Dude and Arachnus to a standstill when they figure out Dedtime set them up to fight a war. His specialty is his speed.

The only girl of the group, Unkaind is a tall smooth talker who specializes in inspiriting her enemies.

The big, pure physical attacker with a low IQ, Untidy doesn't think too hard about things, and as such rushes into situations head-first and confident.

An elderly, wise and calm Wicked Yo-kai that loves to confuse others with trivia and complicated vocabulary. Specializes in magic attacks mainly, and is constantly bringing up the fact that he's 2nd banana.

A violent Elite Wicked Yo-Kai and Dame Dedtime's almost-not-quite-right-hand man with a devestating soultimate. Is always ready to fight and is considered the leader. That's it.
Enma Tribe
Enma! Enma! Indeed, his name is Enma! Enma~ Enma~ Enma~~

The previous ruler of the Yo-kai World, the father of Lucas, and the grandfather of the current Lord Enma. Long ago he sought to unite humans and Yo-kai as friends, but after witnessing the constant wars of humans and how they were negatively influencing Yo-kai he decided to separate the two worlds, but passed away before he could put his plan into motion.Becomes befriendable in the 2.0 update of the third game.

The current reigning monarch of the Yo-kai World, the grandson of the previous Lord Enma, and the nephew of Lucas. He shows great interest in humans and supports both humans and Yo-kai joining hands as friends.In the 2.0 update ‘’Yo-kai Watch 3’’ he gains a new form called Lord Enma Awoken which can be obtained if the player links all three versions.

A god form of Enma who debuted in the 3.0 update of the third game and is exclusive to the Sushi version.

A god form of Enma who debuted in the 3.0 update of the third game and is exclusive to the Tempura version.

A god form of Enma who debuted in the 3.0 update the third game and is exclusive to the Sukiyaki version.

A shark Yo-Kai of the Slippery Tribe and the CEO of the company Yopple, the company that produces Yo-Kai Watches. He is the 1# richest Yo-Kai.

An award-winning director of the Mysterious Tribe from the Yo-kai world that has Nate, Whisper, and Jibanyan be actors in his movies.

An Eastern style dragon Yo-Kai found in Nate's neighborhood. It has a runny nose and carries around a crystal ball which is essential in the first Yo-Kai watch game.
Boss Yo-Kai
A special kind of Yo-Kai that fills boss fight roles in this series. They cannot be befriended, but they do sometimes get smaller recruit-able versions in sequel games. 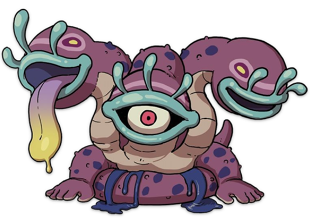 A large, slimy, lizard Yo-Kai sealed at Nate's Elementary school. While it seems to have three eyeless heads, it actually does have a single eye which can switch between heads at will.

Gains a recruit-able version in the sequel game.

The Infinite Inferno has its own version of Slimamander, known as Eyedra, which is more or less the same character and acts as that dimension's Cerberus. 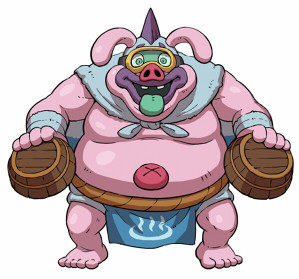 A large, middle-aged pig Yo-Kai that really loves himself a long soak in the hot springs. He does like it hot, and is able to breathe fire out his nostrils should he soak for too long. In the game, he takes Mr. Goodsight's undies and wears them, prompting Nate to fight him and get them back.

Gains a recruit-able version in the sequel.

In the Infinite Inferno, he has a worse counterpart called Hoggles, who boiled other Yo-Kai and drank the broth to gain his power.

A large aquatic Yo-Kai that lurks below Catfish Pond. He is said to be honored by the fishes and can call upon them. He does not like people disturbing his waters, attacking the protagonist when they use Walkappa to try and retrieve a ring for Bear.

Gains a recruit-able version in the sequel.

His counterpart in the Infinite Inferno is Styx Mk. VI, a Yo-Kai that fishes the souls of sinners out of the River Styx.

A Yo-kai that takes the form of a terrifying giant. It causes trouble for the heroes when it causes a fire in the town's shopping area, unintentionally framing Kyubi and simultaneously ticking him off to the point that he has to lead the protagonist to the construction site for a battle.

His Infinite Inferno counterpart is Clipso, which appears on cloudy nights to steal kids who stay up too late.

A suit of samurai's armor that wanders about in Gourd Pond Museum in the more lavish part of Nate's hometown. Freaking out the workers, and drawing in Eddie's attention to investigate, he asks the protagonist to help him get into the museum at night and prove it as something explainable. After getting past security, the suit attack the two, and is revealed to be controlled by a tiny mouse Yo-kai.

Spooklunk, its Infinite Inferno counterpart, was once a strong warrior, gathering vassals, and waiting for the day it can return to battle.

A large spider Yo-kai (likely a Tsuchigumo, based on its illusion-casting abilities) that takes control of Nate's school one night under the guise of a ghostly boy asking for people to play with him. It steal Nate's friends for a twisted game of Hide-and-go-seek, forcing him to find them and fight it.

A Mad Scientist Yo-Kai with an exposed heart attached to a drip bag, Dr. Maddiman was once a human madman who performed experiments on people who came to his hospital. He has since become a Yo-Kai that continues to do these things by posing as a human medical director at the dilapidated Nocturne Hospital, luring Nate in to steal his heart.

His Infinite Inferno counterpart is Dr. Nogut, another mad doctor who seeks to create the perfect Yo-Kai. To do this he tries to combine humans who fall into the inferno with other Yo-Kai.

The Big Bad of the first game, who took control of the Yo-Kai world after King Enma passed away (Yo-kai live a long time, but they can still die). Mc Kraken Is a squid-themed Yo-Kai that dreams of taking over the human world with an army of monochrome Yo-Kai destroying those that will go against him. After defeating Dr. Maddiman, Draggie's crystal ball shows the heroes him addressing his legion, leading to confronting him in the Yo-Kai world itself and later at the sacred tree, where he transforms into a Grotesque One-Winged Angel form.

Within the Infinite Inferno, you get to meet his ancestor, Squisker, who is a tougher version of his second form.

A large sparrow Yo-Kai who wears a kimono. Sitting on a mat, leaning on an arm-rest, and fanning himself, he seems to be similar to a Yakuza boss or an emperor/leader in the Yo-Kai World. After helping his underlings prepare for a party, and asking his guests what talents they have, he becomes insulted when Nate questions he he can do, and challenges the boy to a duel.

Three Oni who serve as Guardians of the Yo-Kai world. Red, blue and black, respecively, they stand to defend even after Enma passed away. Based on your performance in-game, they will either let you by while giving you praise on your virtues, or punish you by dropping the player character into one of the locations under the entrance hall.

Outside of their role as guardians, they also appear as enemies during Terror Time, a random even where you must avoid Oni's of different kinds while searching for the exit and opening treasure chests. Beating them should they catch up to you (easier said than done) yields incredible loot to grab. Being beaten by them however, makes you miss out on the stuff you could have gotten and makes you wake up back at your house.

A vastly vile, evil Yo-Kai sealed at the bottom of the Infinite Inferno/Hell inside a gigantic cooking pot. The True Final Boss of the game. Wobblewok is a nasty blob monster with a variety of abilities to fight with. Luckily it's been asleep, not even noticing how much the prison around it has been deteriorating.

It gains a recruit-able version in the sequel.

A gigantic skeletal Yo-kai that first appeared as the first boss for the second game.

Kin, Gin, and Bronzlow (Do)

Three mysterious Yo-kai from the second set of games who work under their Mistress, Dame Dedtime. Using a giant clock they are able to summon to travel through time, The three continuously send the main characters back through time to try and change events so that Nate/Katie never got the Yo-Kai watch, and therefore not interfere with their own plans.

Kin and Gin are twins (Kin wears red, Gin wears blue), and Bronzlow is their younger brother who never speaks.

The main villain of Yo-Kai Watch 2, a Giant Yo-Kai that takes the form of an old, somewhat regal woman who can cause tremors with her screams of anger. She wishes harm on humans for a mysterious reason, utilizing time travel so as to stop the protagonist from receiving the Watch in the first place and potentially thwarting her.

When she was human, she was falsely accused of crime and sentenced to life in prison, and died of old age there. After revealing this under Tattletell's possession, she goes One-Winged Angel and becomes Dame Demona (Subete Ubaune), an even huger, monstrous version of herself.

A mechanical boss Yo-Kai exclusive to Yo-Kai Watch 2: Psychic Specters, Kabuking is the owner of Gera Gera Resort. He enlists the help of the protagonist to get the resort running again, and offers to star them as the protagonist in a "Kaibuki Play" while he plays the villain.