A list of characters from Sega's Yakuza series of games and the tropes they embody. This page contains the list of main playable characters, recurring enemies and characters from spin-off titles. Due to the series' Loads and Loads of Characters, other characters are sorted by the game they debuted in, listed below.

"The man who brought me up was once what they call Yakuza." 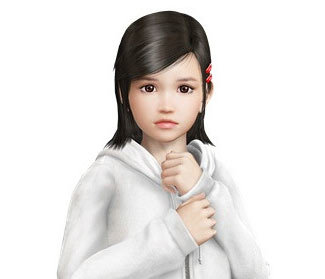 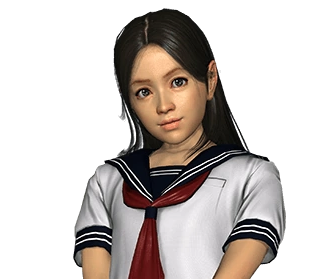 Click here to see Haruka as she appears in Yakuza 5. 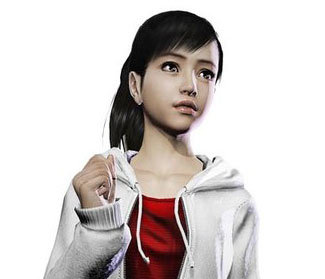 Kiryu's adopted niece and Yumi's daughter Also raised in the Sunflower Orphanage, she first encounters Kiryu while she's searching for her aunt Yumi and her mother Mizuki, but is hunted by the various yakuza gangs for her connection to the missing ten billion yen. After the ordeal, Kiryu takes her under his wing and decides to start a new life with her, but the poor girl constantly finds herself pulled into the conflicts her "Uncle Kaz" is involved in.

Appearing in every game alongside Kiryu (except the prequel), she ages throughout the series and has a different appearance in each game. In the first game and its remake (2005), she's merely nine years old, and by the fifth game (2012), she's sixteen and has already moved out to Osaka on her own to pursue a career as an Idol Singer. She's one of the five playable protagonists in Yakuza 5. At the end, performing in front of a huge audience, she's no longer able to bear staying away from those she considers family and reveals the truth behind her upbringing and the man who raised her.

She returns to the orphanage following Kiryu's arrest and lives peacefully with the other orphans until it's discovered where she lives and the news goes viral. Fearing how she could affect the others living there, she leaves the orphanage without informing anyone of her true whereabouts. After Kiryu leaves jail and discovers this, she's hospitalized after being struck by a car in Kamurocho, and his only link to the truth is her infant son, Haruto and photo of Haruka in Hiroshima, which naturally takes him to Hiroshima to learn what happened and who is Haruto's father. She's stated to be nineteen years old as of Yakuza 6.

"Hey, you! Everything about you pisses me off!"
— Many thugs upon seeing Kiryu peacefully walk past them

Random mooks consisting of yakuza, punks, hosts and young hooligans who constantly go after the protagonists if they're wandering about in their territory for their money or just to find an excuse for reasoning with them or harass them for fun. 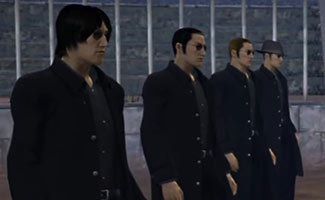 From left to right: Jiro, Jo, Kazuya, and Sango.

Kiryu: So is everyone in your clan like this?
So Amon: I will tell you nothing! Except that we will never forget. One day, even if it takes us 17 years to prepare... my clan will defeat you and prove our greatness!

A clan of powerful, mysterious assassins that has existed for generations, and have appeared in each of the main games. The notorious Recurring Bonus Bosses of the series, they are fought once all of the side quests are completed. Their leader Jo Amon constantly targets Kazuma Kiryu with the goal of killing him to prove that he's the strongest, and is joined by his three apprentices in later games. Dead Souls has Kiryu fight against Jo Amon's undead ancestor, Rasetsu Amon, and in the prequel, he fights the previous head of the clan, the elderly So Amon. From Judgement and onwards, the protagonists face another member of the clan, Shin Amon, who focuses his efforts on Takayuki Yagami and Ichiban Kasuga. 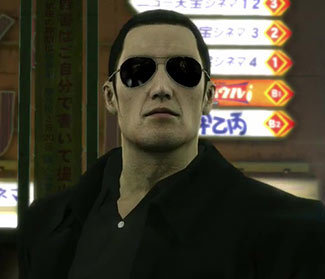 "I learned how to kill from the barbarous warlods of Mexico. I studied martial arts from a revered guru in the Himalayas. Swam laps across the frigid Strait of Dover. Tempered my body and mind in the sweltering heat of the Sahara. And now, I have Komaki's ultimate technique in this very book. Kiryu. Defeating you is the sole purpose of my existence!"

The mysterious leader of the Amon Clan. In the first game, he issued a challenge to Kiryu after he completed all the side missions in order to determine which of them was the strongest, and has bore a tremendous grudge against him since. In the second game, he has his three apprentices attack Kiryu while he defeats Komaki and steals his ultimate technique, just to lure Kiryu out to face him. The third game reveals he was behind the commission of the IF7 machine and used it to test himself and gain information on Kiryu. In the fourth and fifth games, his apprentices join him to take Kiryu and the other protagonists down. In the prequel, he fights against Majima on his first assignment, while his father So Amon takes it upon himself to fight Kiryu knowing the threat he presents to the clan. 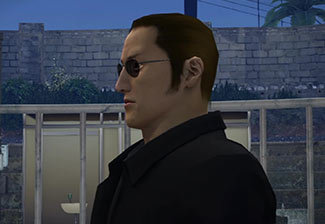 One of the Amon brothers who debuted in the second game and the eldest. In his appearances, he's always the first Amon brother to be fought. 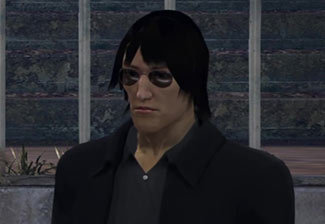 The second of the Amon brothers who debuted in the second game. He's always the second brother to be fought whenever he appears. 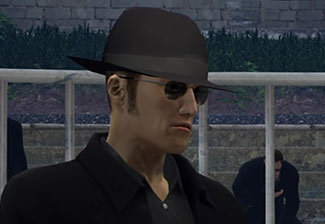 The third and youngest Amon brother who debuted in the second game, as well as the third to be fought when he appears. 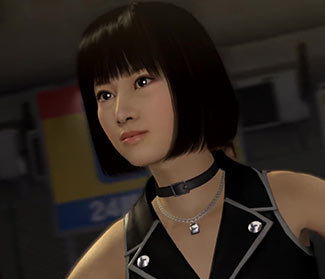 The eldest daughter of the Amon clan introduced in the fifth game, she challenges Haruka because she was raised by Kiryu and sees her as his daughter. As the clan has an ironclad rule that prevents men from fighting women and vice versa, she's unable to fight him and win back the honor of the clan, and takes her frustrations out on Haruka instead. 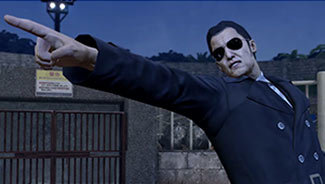 The previous leader of the Amon Clan and the father of Jo and his brothers, who takes it upon himself to face Kiryu in the prequel after seeing him in a dream and realizing he would become a threat to the Amon Clan's reputation as the world's strongest fighters. 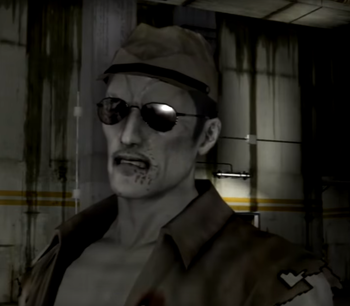 The distant ancestor of the Amon Clan and the first Amon assassin. He was killed in a war many years ago where his vengeful spirit lingered on in Kamurocho's underground system in the Dead Souls spinoff. After collecting several cursed relics, Rasetsu returns as a super-powered zombie, much to Jo's shock. 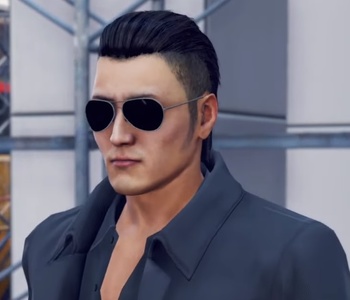 Another member of the Amon Clan who challenges Yagami during a side quest in the remains of Little Asia. He also shows up in Like A Dragon at the end of the post-game "Final Millennium Tower" dungeon, challenging Ichiban to see if he is worthy of the title of "Dragon."

A lieutenant of the Omi Alliance who started the Kamurocho zombie outbreak.

An arms dealer who has allied himself with Nikaido.

A mysterious scientist who manages to get in contact with each of the protagonists to give them certain tasks in killing the zombies and mutants running amok in Kamurocho's quarantine zone.

A JSDF soldier who is stationed in Kamurocho during the zombie outbreak.

The main protagonist of Kurohyou, son of Amamiya Taizan/Nagi Tooru, orphaned at an early age after a fire in Champion Street broke out, killing his mother and leaving him orphaned with Saeko who was old enough to be considered his legal guardian. Raised by the streets alone, he quickly became violent and temperamental and took up judo classes and excelled in them. Ultimately he get in a schoolyard fight that ends with a student ending up going comatose and Tatsuya being arrested. Sentenced to two years in Juvenile Hall Tatsuya would develop a strong resentment towards authority after his release as he drops out at the age of 17. Doing part time jobs and picking fights with fellow thugs and gangs in Kamurocho like most aimless youth.

Tatsuya soon became a street fighter forced into fighting for the Kuki Family after he supposedly murdered Naoki Toda and stole from him. Tatsuya quickly proves himself and gains the title "Kamurocho's Raging Dragon" for his victories in the Dragon Heat and learns that Naoki miraculously survived and discovers that the events were part of the same fire that killed his mother and how it connects to the politics of the Tojo, the cops and the landowners. He later becomes a professional boxer but returned to the Dragon Heat after a new gang from Osaka calling themselves the Ashura started working for the Nioka family.

The sister of Tatsuya and the owner of the pub Scarlet, while she knows about her little brother being a bundle of trouble. She didn't know about how much trouble he got in when he supposedly killed Toda Naoki.

One of the new fighters in Dragon Heat and one of Tatsuya's friends. Shinji has aspirations of joining the boxing league and fights in the Dragon Heat to earn money and reputation. After being saved from Ashura thugs, Shinji proves himself in a match to Tatsuya. However his dreams were nearly cut short due to Shinobu beating him in a street brawl and leaving him comatose for a good duration of the game. He comes back after receiving rehabilation.

One of the new fighters in Dragon Heat and Tatsuya's friend. He joined the Dragon Heat to help support his orphanage until the Ashura arrived to challenge the fight ring's members. A lady's man, he gains the romantic interest of Saeko and comes to her rescue when Ginta kidnaps her from her bar. He would die in the rescue, found barely moments with the bomb wired to Saeko rearming as he takes bullets meant for Saeko as Tatsuya come too late to keep him alive.

One of the new fighters in Dragon Heat and one of Tatsuya's friends. Tomotsu is considered the weakest link for the fact that he has one of the worst losing streaks in the Dragon Heat at 9 losses and zero wins. Face with possible expulsion, his tenth match comes up as he is soon caught between love and finding his own inner strength.

The true leader of the Ashura Gang in Kurohyou 2. An orphan who grew up with Makoto at an orphanage, he became friends with Akita and his gang who formed the underground fight ring at Ashura. His troubles began when his girlfriend and childhood friend Shizuka died because of a scheme by Tsurumi Tadashi who had bribed a doctor to give a planned lung transplant and make her death look like a failed surgery and began plotting revenge

The head of police in Kurohyou 2, just like Munakata, he was an assistant commissioner for the syndicate investigation division. Worked with Niotaa to spearhead Project Pegasus, an attempt to corner the Kuki entertainment racket for Niota. Indirectly responsible for the death of Shizuka, Ryou's lover and childhood friend. He is also part of the investigation group of the Champion Street Arson, the very same one which killed Tatsuya's mother

The leader of the Niota Family, a rival group competing against the Kuki Family in Kamurocho and business partners with Naoki Toda at the Chinese restaurant Chouraku as their front. He is from Osaka and serves as the main source of headaches for Tatsuya throughout the series as he has connections in both Osaka and Tokyo, in the first series he was nothing more than a petty loan shark who owns one fighter who Tatsuya must beat. In the second game he becomes much more prominent as he makes a wager against the Dragon Heat in a fight club faceoff with the Ashura, a fight club in Soutenboori as revenge for losing his prized fighter and Naoki's death.