A weapons tester for the Outfitters. Alexa loves machines and gadgets above all else, and is happiest when she's in a Skell cockpit. Alexa uses a unique style based on the Partisan Eagle class. To her, fighting from a Skell cockpit is sheer ecstasy.

A military instructor on Earth, Bozé continues to instruct students on Mira in between his Harrier duties. He is fascinated by Japanese culture, requesting the player address him as "Sensei", and while his students have deep affection for him, others find his strictness off-putting.

A Qlurian who joins BLADE after the party rescues her and Rock from the Ganglion.

Phog's older brother and his opposite in every way. Loud and brash, Frye often throws himself in dangerous missions. Frye uses an alternate Samurai Gunner build, fighting with a Longsword and a Gattling Gun. His proficiency with a blade is most apparent when in dangerous situations.

Hector Birtwhistle is a logical man armed with untiring ambition and scholarly acumen. His judgement places the interests of the human race above all else - at times resulting in a rather cold impression. H.B. is a strategist who can calmly formulate a battle plan for any situation. He uses a unique style based on the Shield Trooper class.

One of BLADE's Mediators. She loves helping people and is selfless to a fault.

A 19 year old mechanic who wishes to join BLADE.

A member of BLADE known for her violent, backstabbing nature. 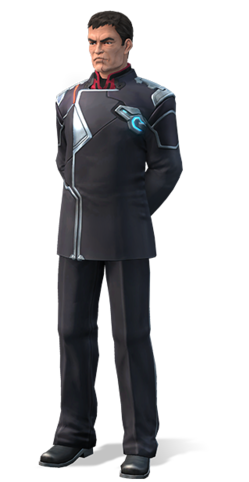 He was the former captain of the White Whale and serves as the military chief in the autonomous government of New Los Angeles.

Phog is quite shy, and adheres to his own natural rhythm above all. Due to these unique qualities, he prefers to carry out assignments alone. His genius-like traits, however, nurtured excellent skills in the field. Phog uses a standard Winged Viper style. His proficiency with a blade is most apparent when in dangerous situations.

A Reclaimer who pushes himself out in the field to find pieces of the White Whale.