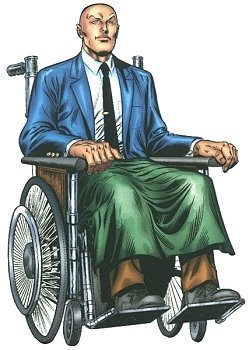 The original founder of the X-Men. An idealist who believes that humans and mutants can live together in peace. He's pragmatic about it, though, considering he essentially runs a combat school. Lost the use of his legs during a fight with an alien called Lucifer who was planning an Alien Invasion, got it back after an intimate encounter with the Brood, was put back in his chair by the Shadow King, and is currently walking once again. Likes to keep secrets, thinking that redundant plans and safechecks are best for everyone, but this tends to bite him on the ass more often than not. Also tends to be obsessed about the cause to the detriment of his social life. Xavier is the world's most powerful telepath, being able to read and fully control the minds of large groups of people at a time. 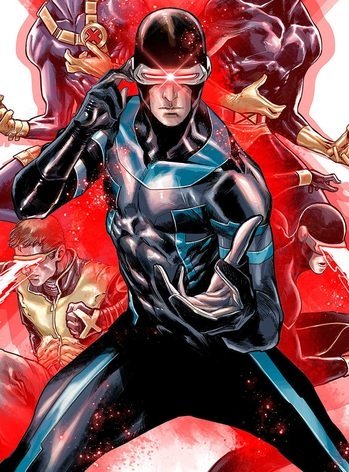 The first X-Man, Scott Summers possesses the mutant ability to draw ambient energy from another dimension through his eyes, which are actually portals to said dimension. Usually channeling this energy into concussive force blasts, he is visually distinctive for the ruby quartz visor he wears to control his devastating power. A born leader, Cyclops succeeded his mentor Professor X to command the X-Men. 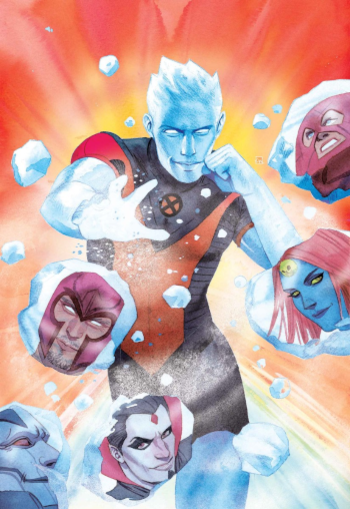 Fighting villains and personal demons for years has never stopped him cold.

"My name is Bobby Drake. Iceman. I've been an X-Man, an X...Factor-ian, a Defender, a Champion (don't ask). I've been a super hero since before I was old enough to shave. I've stood side by side with the toughest, most powerful heroes in the known universe and always held my own. But today... today I need to be something more. So go ahead, call me a joke if you want. Label me the X-Man with the lamest power ever. But a man of untapped potential? Don't you dare ever call me that again!"

During the All-New, All-Different Marvel era, there were two Bobby Drakes populating the mainstream Marvel Universe: original Bobby, who's since grown into adulthood, and a time-displaced teenage Bobby, who (with his fellow original X-Men) was pulled from the 1960s into the present. Each served on a distinct faction of the X-Men: adult Bobby with the Extraordinary X-Men, teenage Bobby with the All-New X-Men. At the end of Extermination, however, the younger, time-displaced Bobby was returned back to his own time period and had his memories wiped.

Historically, he was also a member of The Defenders, the original X-Factor lineup, and the (much-maligned) Champions of Los Angeles.

No relation to a certain Tom Kazansky. 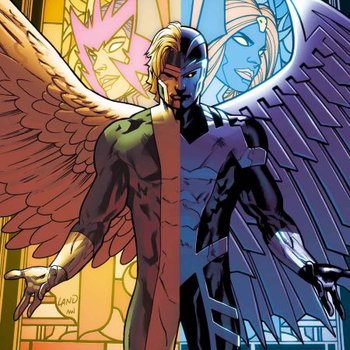 A beautiful, somewhat conceited wealthy young man who has wings which allow him to fly. Initially one of the proudest members of the group, became more and more progressively useless when several other mutants were introduced who could fly, as well as do many other useful things. Once lost his wings in a fight, which caused him to do a Face–Heel Turn to get cybernetic replacement wings. Sometime after that, he developed regenerative blood which caused anyone touching it (foremost himself, obviously) to heal from any injury. Recently, this wasn't seen as quite enough, so Angel was upgraded to have the ability to switch at will between feathered Angel and evil, razor-winged Archangel forms. 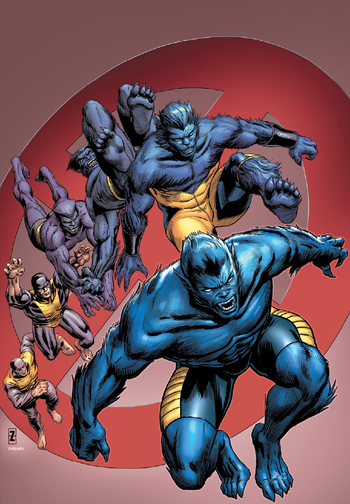 "Some of us prefer the spotlight of the melody... like a shrill, brilliant violin... or a fun, emotive sax. While others harmonize in the background. Some serve a necessary function by mindlessly beating drums and crashing cymbals... pleasuring in their violent rhythm. And there are those who are as versatile as a cello... able to play melody or harmony, to swing between the brightest and darkest notes. And I... I am their conductor."

A brilliant scientist, athlete, and bibliophile, at first the only thing that indicated that Hank McCoy was a mutant were large hands and feet, and, later, an overall simian aesthetic. However, an experiment to enhance his already superhuman strength and agility transformed him into a blue-furred ape creature and later a blue lion man. Beast is a genius in genetics and biology and enjoys quoting Shakespeare. His even-handed and professorial attitude tend to keep the other members from panicking in situations. He's actually been in more teams than any other X-Man, having been a member of The Avengers and The Defenders before; accordingly, being in the public eye as a member of the high-profile Avengers has made him one of the most accepted mutants by society at large.

Despite his monstrous appearance, Hank remained upbeat and witty for years, and continued serving as a stalwart X-Man and professor at the Xavier Academy in the following decades. He also became known for his pro-mutant activism and accolades in the fields of genetics and biochemistry. However, after M-Day, Hank grew angry and frustrated at his failures to prevent or reverse the depowering of almost all mutants and had a severe falling out with Cyclops over the morality of X-Force and other issues. From there, he became convinced that only he had the intellect to solve the problems facing mutantkind, to the concern of the rest of the X-Men who called him out for his increasingly reckless and immoral actions. Upon the founding of Krakoa, little remained of the witty and kind Dr.McCoy, and Hank was appointed the head of the new X-Force to act as the new nation's "mutant CIA", wielding an large amount of unchecked power which he believed only he had the intellect, right, and ability to hold. 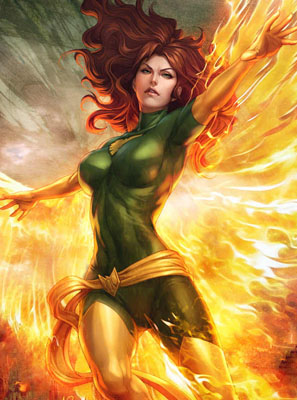 Jean Grey was one of the five original X-Men. An omega-level mutant telekinetic and telepath, Jean has gained near limitless powers as a recurrent host of the Phoenix Force. She is known for her many returns from death and as the deceased wife of Cyclops.