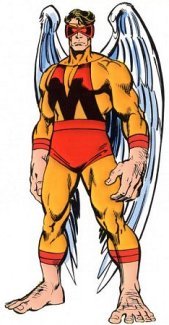 You know what I am? I'm the Mimic! I'm as powerful as all of you put together!

A young man who accidentally gained the ability to copy the knowledge, physical attributes, skills, and superpowers of anyone near him for a short amount of time. He grew more and more conceited as he grew up and desired the ability to absorb power and knowledge personally. He sought out the X-Men to copy their powers so he could use them to activate a machine his father told him would make his powers permanent, when actually it was supposed to cure him of them. He returned to antagonize the X-Men, either fighting against them or temporarily joining them to show off. Because he was exposed to them for so long, he retains the powers of the original five X-Men permanently. Mimic is of note for being the X-Men's first new member as well as its first non-mutant (Depending on the Writer, they go back and forth on this). Unfortunately, he wasn't with the team for long due to his brash nature.

He appears as a main character in Exiles in a somewhat reimagined form, being from a universe where he is without question a mutant and joins the X-Men with good intentions (eventually becoming their leader). This version has the ability to permanently absorb the powers of up to five people at a time, but has to "delete" old ones from his body to add new ones, and is usually used as The Leader within the team's dynamic.

See Exiles for tropes specifically relating to Mimic in his Exiles incarnation. 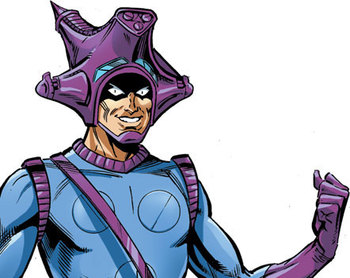 The second-in-command of Factor 3, a replacement for the Brotherhood of Mutants that wanted to start World War III. The leader of Factor 3 was revealed to be an alien and his organization turned on him and was disbanded. He secretly joined the X-Men and was killed shortly after his covert membership was revealed. Morph from the animated series was based on him.

A parallel universe version of him is a constant member of the Exiles, where he's more of a wacky, Looney-Tuneish character who uses his ability to entertain.

The main universe version of Changeling had shapeshifting, and minor psychic powers. The Exiles version has more powerful shapeshifting powers. 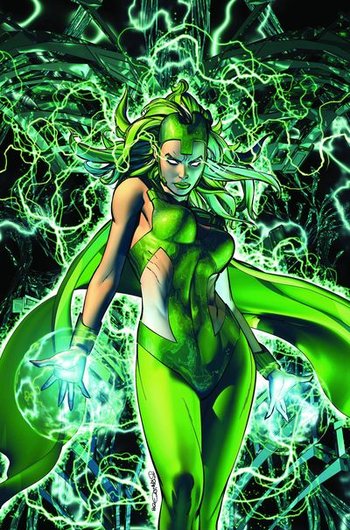 I often find a terrifying comfort in the possibility of evanescing. I never asked to exist. Or to be like this. This clumsy and fumbling congregation of flaws. I think there's something wrong with me. I can still feel an itch in my head, like Saturnyne's not quite done with me yet... Sometimes I'm able to convince myself that there's no such thing as kindness in this world. No such thing as courage. I tell myself there's only redemption and penitence. There is only reticence and pain. I am — thankfully — often wrong on such things.
— Lorna Dane, X-Factor #4

As a long-running character in the Marvel Universe, Polaris has appeared in various other media since being introduced. She showed up in a few episodes of X Men The Animated Series, as well as Wolverine and the X-Men (2009). In live-action, Polaris features as a regular on FOX's The Gifted, portrayed there by Emma Dumont. This version of the character emphasized Lorna's issues with mental illness, as well as make reference to her familiar parentage. 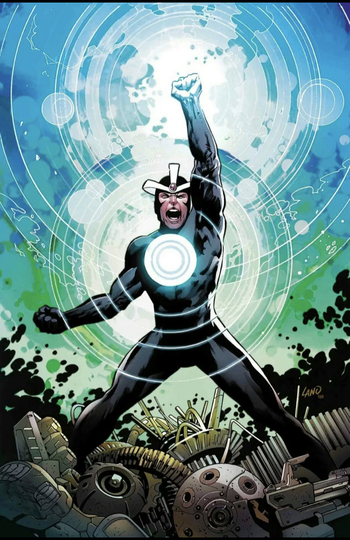 Havok is a Marvel character created by Arnold Drake and Don Heck.

Scott Summers' younger and more rebellious brother. When Scott and he were orphaned during an alien-caused plane crash, Alex was adopted, Scott was stuck in the orphanage. Alex likes the X-Men, but resents Scott's position, so is usually a reserve member. Alex has the mutant power to project energy blasts from his hands, but Scott and Alex are immune to each other's powers, leading to fist-fights between them during conflicts. Occasionally sports an out-of-control temper and the power of a small sun. Is the long-time boyfriend of Lorna Dane a.k.a. Polaris, although the two eventually settled on being friends. Had his own series for several years, Mutant X, which involved him being trapped in a parallel world.

Alex was selected by Captain America to lead the Unity Squad, a team of Avengers which included mutants, in the aftermath of Avengers vs. X-Men in a bid to improve relations between humanity and mutants. He eventually resigned after having his personality temporarily inverted during AXIS. Alex rejoined his brother when most of the X-Men were thought dead and sacrificed his life buying Scott time to escape an army of O.N.E. Sentinels.

With the founding of the mutant nation of Krakoa, Alex was resurrected by the Five and joined his brother Scott in living at the Summer House in the Blue Area of the moon alongside the rest of the Summer's family, including his revived brother Vulcan. However, the traumas of the past several years have left Alex mentally unstable and a danger to others, resulting in him being placed on Mr. Sinister's Hellions, a team of mutants whose destructive or anti-social tendencies are being channeled for the good of Krakoa.