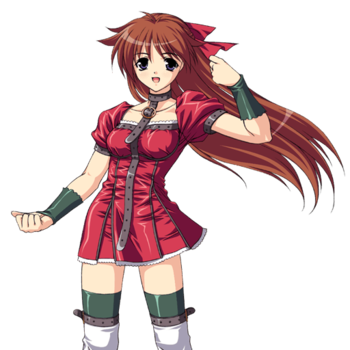 One of the selectable protagonists of 2 and V2, Megumi is a former track star who while on a visit to Tokyo, happened upon the NJWP tryouts, joined in on a lark and passed with flying colors. After becoming best friends and rivals with fellow rookie Chigusa Yuuki, Megumi participates in the NJWP/JWI brand war and trains in Europe, Mexico and America before becoming embroiled in the dispute over the IWWF Tag Team Championship. Teaming up with Chigusa, she usurps the titles and cements herself as a true main eventer. 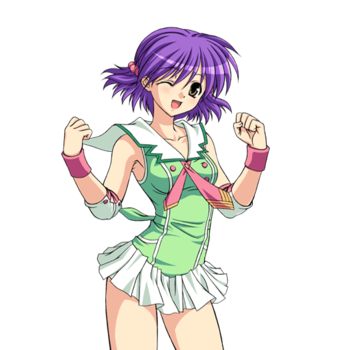 The other selectable protagonist of 2 and V2. A young hopeful who came to Tokyo to try out to wrestle for NJWP, she loses her way in the big city and ends up being helped by Megumi Mutou, who also decides to try out. After passing, she and Megumi become best friends and rivals, eventually teaming up to capture the IWWF Tag Team Championship. An avid baseball fan, she starts a grasslot team among her friends at NJWP, playing Right Field... but she's notably bad at this sport despite her athletic ability. 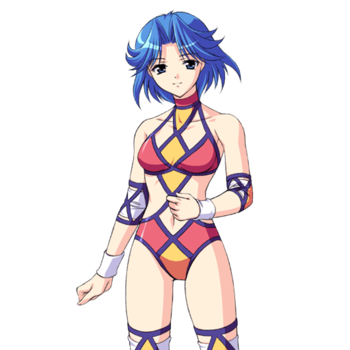 A relative newcomer who joined NJWP after Yukiko became its star wrestler. Training under Toshimi Minami, she becomes a capable user of submission holds while also studying for various qualification exams in order to prepare for life after her wrestling career ends. Retsuden establishes that during the events of V1, she originally wrestled for the Osaka-based promotion World Women's Pro Wrestling prior to that organization's collapse. In 2/V2 she accompanies Toshimi in temporarily leaving NJWP for JWI. 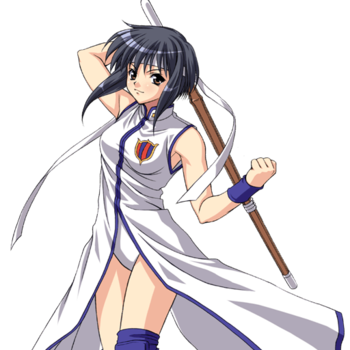 Daughter of a kendo master and Megumi and Chigusa's senior at NJWP. Strict and unwavering, she has a tendency to attempt to enforce order and morals on those around her, especially the trio of Chizuru Nagahara, Rei Tomizawa and Cutey Kanai. During the brand wars, she steadfastly remains with NJWP while being the most vocally outraged at the members who leave for JWI. 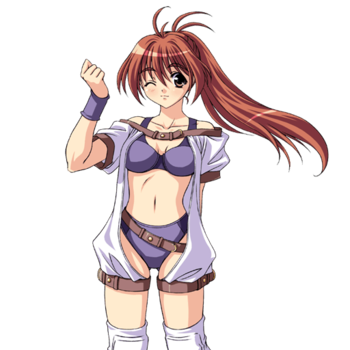 A German Suplex obsessed girl who holds the Asia Tag Team Championship alongside Shinobu. Close friends with Cutey Kanai and Rei Tomizawa, she and the former leave NJWP for JWI during the brand wars, but return after JWI's dissolution. She later becomes Asian Heavyweight Champion. 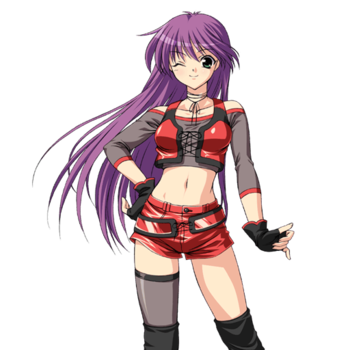 An otaku who wears various cosplay costumes to her matches and takes part in anime fan events in her spare time. Although friends with Chizuru Nagahara and Cutey Kanai, she opts to stay with NJWP during the brand wars while the other two transfer to JWI. 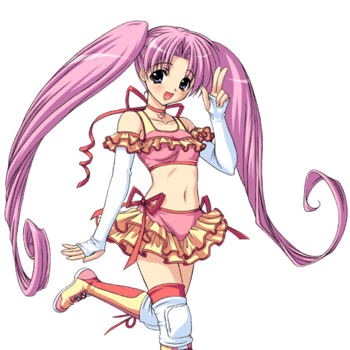 An idol wrestler prone to crying who appeared on the scene after the retirement of Hitomi Fujishima. Although weak enough to be trounced by her kouhai Megumi and Chigusa at first, she undergoes Training from Hell when she transfers to JWI during the brand wars and later goes abroad to train in Mexico, returning with her abilities significantly improved. Good friends with Chizuru and Rei and loves video games. 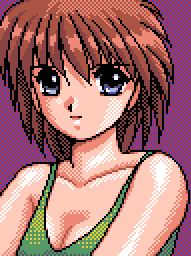 A foreign power wrestler who appears in the early game. 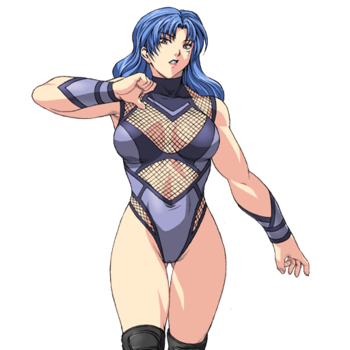 A veteran wrestler whose hobby is American Football and makes use of the power she gained through it to put the hurt on her opponents. 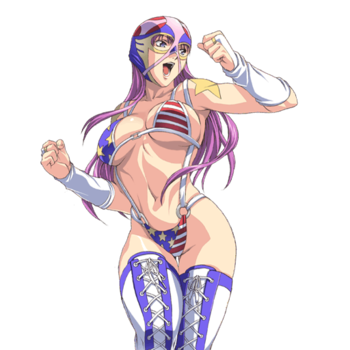 A good-natured, flamboyant showoff of a babyface who helps the chosen protagonist of 2/V2 make a kayfabe Heel–Face Turn and forms a tag team with her. 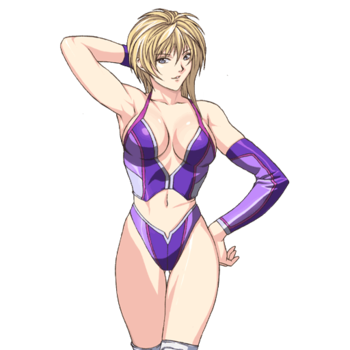 A former member of Russian special forces turned wrestler and the reigning EWA champion. Despite her unflinching, cold demeanor and merciless use of command sambo-inspired moves to put away her opponents in the ring, outside of it she's gentle and caring. She takes a shine to the protagonist of 2/V2 and watches over them during their European excursion. 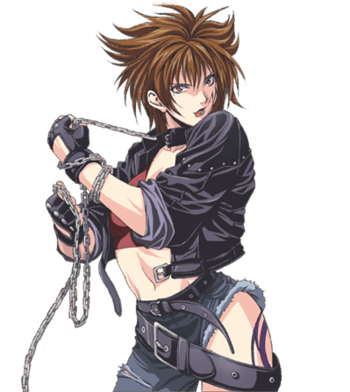 The Emissary of Hell

A Russian Heel notorious for her viciousness. 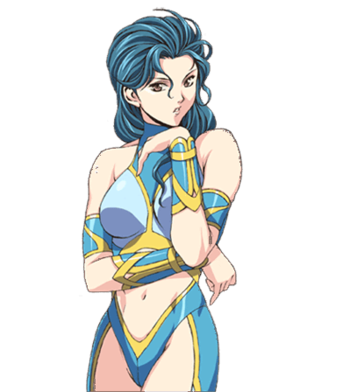 A shy young woman wrestling for EWA. While possessed of natural wrestling ability and well-refined submission techniques, her own lack of self-confidence keeps her from reaching the organization's upper card. Instantly hits it off with Megumi/Chigusa. 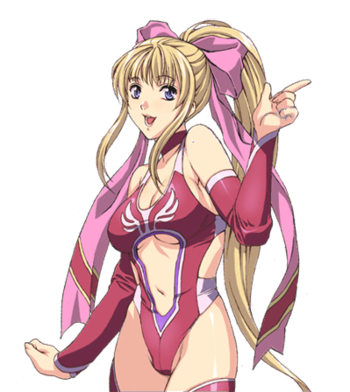 An American wrestler who charms crowds with her sunny disposition and dazzling moves. During V2, she and Thunder Ryuuko stage a run-in on NJWP during the fallout of the brand wars. 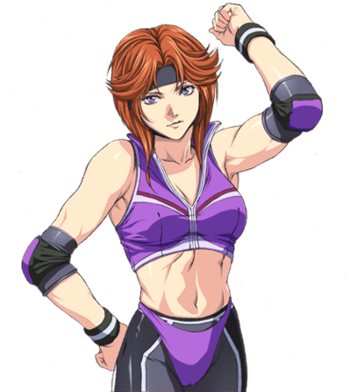 Sniper of the Combat Sports World

One half of the famous Sniper Sisters tag team. Possessed of incredible power, stamina and throwing technique, she and her younger sister Cory cover each other's faults while exemplifying their strengths. She and her sister dethrone Yukiko and Bomber as IWWF Tag champions in 2 and V2, and are subsequently defeated by the impromptu pairing of Yukiko and the protagonist, only to retake the titles after Yukiko and her partner split up shortly thereafter. 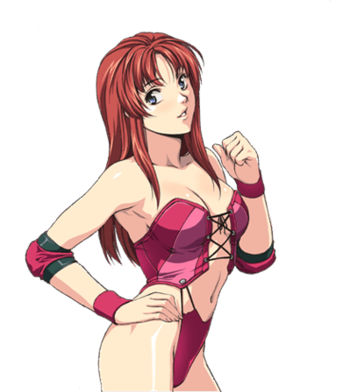 The other member of the Sniper Sisters, Cory contrasts her elder sister's fortitude and power with sharp judgement-making skills, speed and devestating submission moves. In 2 and V2, she and Lily retake the Tag Championship when Yukiko and the protagonist go their seperate ways, only to have their new reign cut short by the sudden reappearance of Beauty Ichigaya alongside her new partner, Jena Megalight. During V3, the Sniper Sisters are locked in a feud with Megumi and Chigusa over the tag belts. 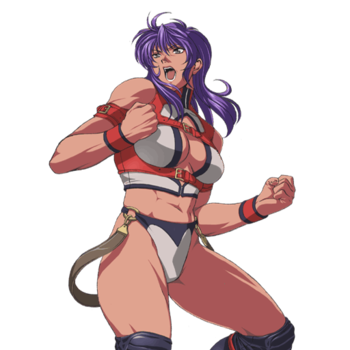 A powerful amateur wrestling champion who is scouted to become Beauty Ichigaya's tag partner after dominating competitors all over the US. After taking the IWWF tag titles from the Sniper Sisters, she and Beauty go to Japan to challenge the protagonist and Yukiko, injuring the latter in a ringside brawl before the match can officially begin. However, the arrival of the protagonist's friend and rival as a last minute substitution for Yukiko ends up spelling defeat for the Megalight/Ichigaya pair, who subsequently break up.

Vicious Combination
An unaffiliated tag team encountered early on in 2. 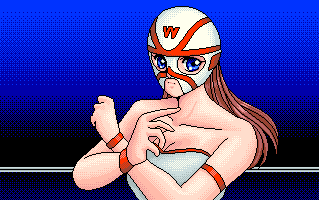 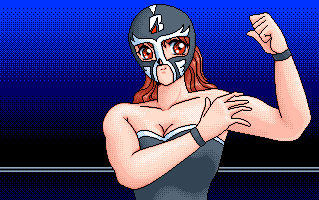