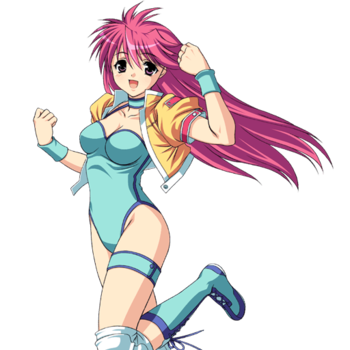 Blazing Warrior
"I'll accept a challenge from anyone!"
The Protagonist of the first game (and its remakes) as well as the poster girl of the franchise. A spirited young woman who over the course of the series goes from talented young up and comer to one of the most celebrated champions in the history of women's pro wrestling.
Mimi Yoshihara 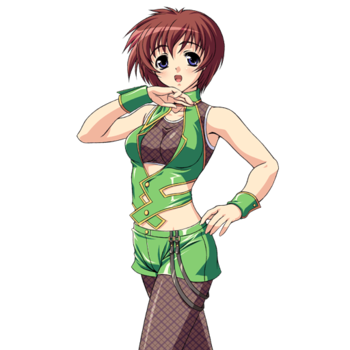 Submission Wizard
"I'll give it my best again today!"
A former national champion at karate, she challenged Panther Risako to a match in order to prove her belief that karate is the strongest martial art, only to be defeated. However, she fell in love with wrestling and polished up her skills in submission moves and although she lost her title of "Venus of Submission" to Toshimi Minami, she is still considered a force to be reckoned with.
Bomber Kishima 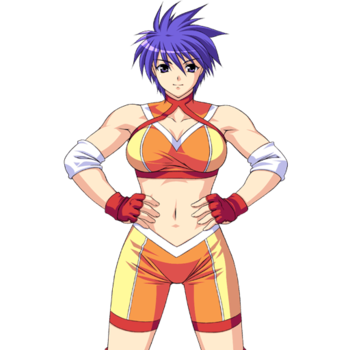 Miss Big Bang
"Have a taste of my power moves!"
Yukiko's classmate during the NJWP tryouts and later roommate and best friend. A constant source of support for Yukiko throughout her endeavors and her most frequent tag partner and co-champion.
Hikaru Ijuuin 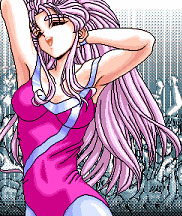 The Fighting Rich Girl
"I apologize for not holding back. I thought that you would be a more difficult opponent."
Yukiko's kind senpai at NJWP and the daughter of the head of a major conglomerate who wrestles while also attending college. 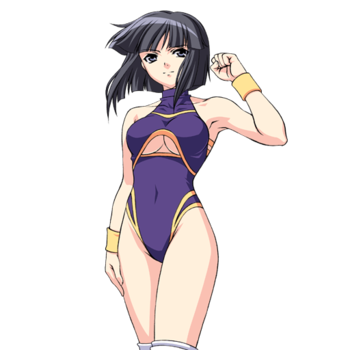 The Venus of Submission
"I'll teach you how scary submission holds can be."
A cool, aloof wrestler who appeared at the NJW gym unannounced one day to challenge the organization's members. Defeated by Yukiko, she decides to join up with NJW and later joins Yukiko's Revolutionary Army Power Stable. A top-class competetor who took the "Venus of Submission" title from Mimi Yoshihara, she's also been a top wrestler for Beauty Ichigaya's short lived JWI and Haruka Date's WOLF promotion.
Teddy-Cat Hori 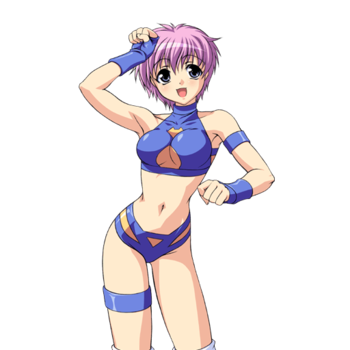 Cutting Captain
"I'll give it my best again today, nyan!"
A good-natured, cat loving wrestler serving as NJW dorm captain when Yukiko entered the promotion. She would later leave the dorms to live with her boyfriend, retiring to marry him. She comes out of retirement to assist in the formation of Blade Uehara's Pacific Women's Pro Wrestling promotion alongside Mimi Yoshihara.
Hitomi Fujishima 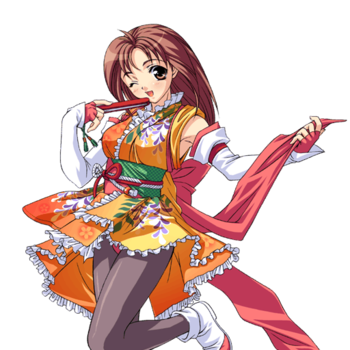 The Invincible Idol
"After all, I'm a totally invincible idol, y'know?"
An idol wrestler who cares more about winning popularity contests than matches. She retired once to focus on idol work, but returned to the ring upon noticing the popularity of other up and coming idol wrestlers like Cutey Kanai.
Riyu Kikuchi 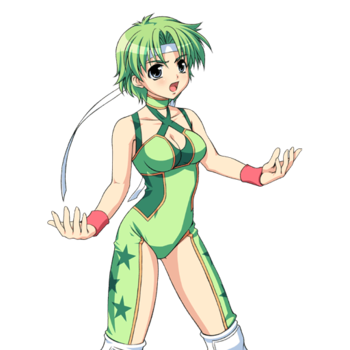 Kamikaze Fighter
"I'll show you the power of the Kamikaze Fighter!"
Yukiko's kouhai and self-proclaimed number one student. A determined girl whose gentle demeanor belies a never-say-die spirit, she gives her utmost in every bout. She also stands steadfast as a member of NJW, remaining with the group throughout story-driven games until her retirement due to injury in Special.
Blade Uehara 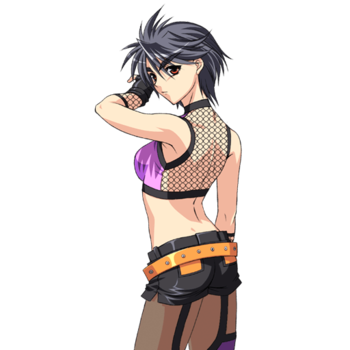 Aerial Artist
"I feel sorry for you, but... this is the end!"
Once Panther Risako's tag team partner and best friend, their differing opinions about their futures as wrestlers lead to a breakup. Blade challenged Risako for the Asia Heavyweight Championship, but lost and disappeared from the Japanese wrestling scene for a time. After returning to Japan, she accepts an offer from JWI to wrestle for them as a free agent and later a promotion of her own: Pacific Women's Pro Wrestling. 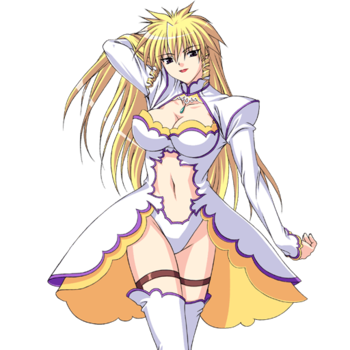 The Most Wicked Rich Lady in History
"Ohh-ho-ho-ho! You're 1,000,000 Years Too Early to defeat me!"
The daughter of the head of a world-class conglomerate and a national judo champion herself, she was scouted as a wrestler by NJW and entered the promotion without having to pass an exam. Rivals with Yukiko ever since the latter got into an argument with her at her own press conference, she's constantly coming up with schemes to one-up Yukiko and prove her own superiority.
Panther Risako 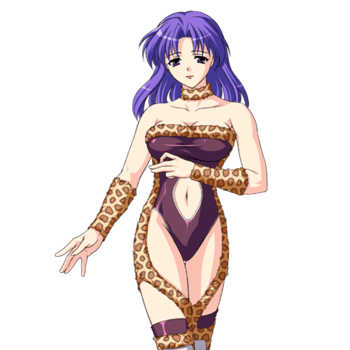 Queen of the Ring
"Can you endure this technique? I wonder."
The Ace of NJWP and its champion. However, an incident involving the previous champion causes her to start holding back and she refuses to challenge for the world championship, which first leads to her own tag partner and friend quitting the promotion, then a revolt by several of the younger wrestlers spearheaded by Yukiko. After losing the Asia Heavyweight Championship to Yukiko, she retires and becomes an executive at NJW and its ringside commentator, eventually marrying her broadcast partner "Foul Tip" Fukuzawa. 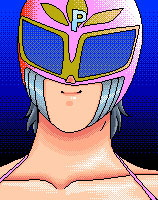 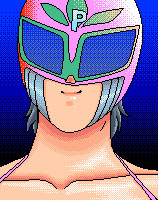 "Hmhmhm, a slapdash pairing like yours won't be able to win a tag match. Not against a combo as perfectly in synch as ours, that is." 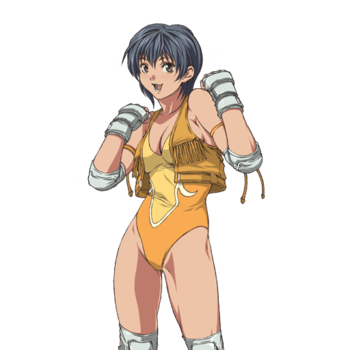 "I told you that there's no way I'd lose a battle of speed!"

A Mexican luchadora whom Yukiko met on her first trip abroad. After their initial bout, the two became fast friends and Despina has continually harbored goodwill towards wrestlers who come from Japan ever since.
Chocho Caras 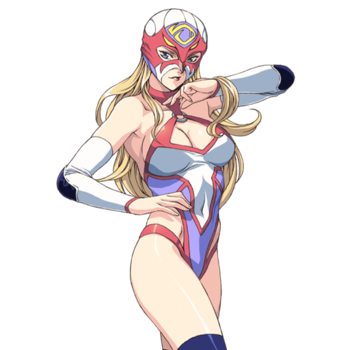 "I'll show you the power of the Masked Madam!"

The most popular luchadora and perrinial champion of the mexican promotion AAC. Appears in the first game as the second boss of the Mexico chapter due to having been dethroned as chamption by Em Sando, but reappears with her title intact in all subsequent games with the exception of 3.
Em Sando 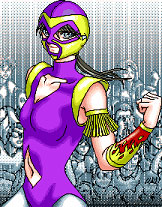 God's Messenger
"Since it's come to this, I'll put my pride as Mexico's heavyweight champion along with my title of 'Saint' on the line and accept your challenge. Now, who's going to fight me?"
The third and final boss of the Mexico chapter, who dethroned Chocho Caras to take the AAC championship. Her personal details are completely unknown, though Japanese wrestlers who face her might notice that her fighting style seems somehow familiar... 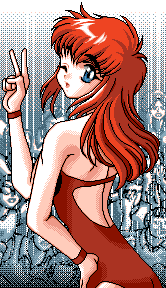 A wrestler who despite earning championships in her local promotion, is still a newbie in the big leagues and thus doesn't pose much of a threat to those with more experience. In V2, she's part of the heel tag team "Pretty Witches" with Dynamite Rin. 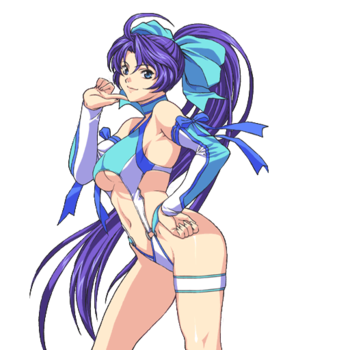 A heel wrestler hailing from Canada, she competes for the IWWF in older games and the WWCA promotion in newer ones. She and Miria make up the heel tag team "Pretty Witches" in V2. 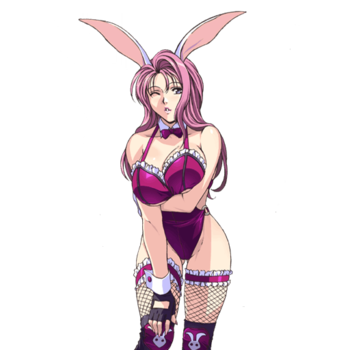 A former model turned idol wrestler who boasts considerable popularity due to her curvaceous figure and fanservicy costumes. 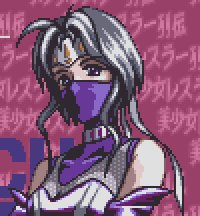 A free agent wrestling for the IWWF and the second boss of the America chapter, known for her use of illegal moves. 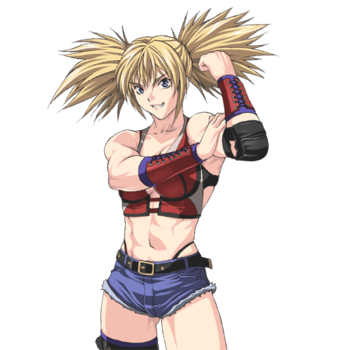 The final boss of the America chapter in 1 and the reigning IWWF Heavyweight champion... or so it was thought. In reality, Beauty Ichigaya had gotten to her before the player and taken the belt from her. 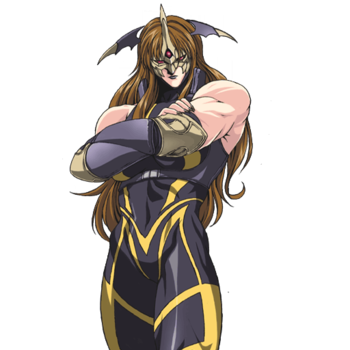 The Chaotic Flower of Evil

"I'll teach you the true meaning of pro wrestling."

A mysterious masked wrestler who suddenly appears on the scene and makes quick work of Beauty Ichigaya, usurping the latter's recently accquired IWWF Heavyweight Championship. Believing herself to be the mightiest wrestler of all, she announces the opening of the Athena Crown tournament, the winner of which will be allowed to challenge her for the belt. Following her loss to Yukiko, she continues to terrorize the American circuits as a monster heel.