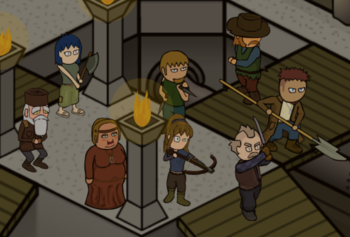 A Voronese expatriate and former soldier, Tevoran gained fame and valor during the Voronese Civil War. After many adventures and exploits, he eventually came to reside in Tierva, where he attempts to carry out (usually illegal) schemes to bring him money. He exhibits a superlative penchant for sesquipedalian loquaciousness matched only by his love of the sweet sap of the poppy. Although Tevoran's schemes may seem outlandish and illogical to the uninitiated, he is possessed of some strategic wisdom, which is displayed rather rarely due to his frequent state of intoxication.

A hot-tempered and violent young woman, originally from a small village in the Solet Archipelago. Ysabel was adopted by Tevoran at a young age and has since been his constant companion and accomplice in his various criminal activities. As opposed to her adopted father, she tends to favor a direct approach to solving conflicts, feeling diplomacy is almost always a waste of time. Ysabel has been known to use a variety of torture methods on those who would cross her, once even subjecting an unlucky victim to a very "intimate" encounter with hungry rats for making fun of her combat gear (sweatpants).

Son of the famous adventurer Tomasz Vaclav. Ivan has recently left his birthplace in distant Phoria for the realm of Tierva, hoping to seek out his relatives. Ivan came to dwell with his uncle Milan, whose money he squandered on gambling. He is currently working off his massive debt to his uncle under the service of Tevoran. Lazy and indolent, Ivan will avoid hard work, and indeed any sort of effort, whenever possible. Outside of combat, Ivan is rarely seen without a lit "cheroot", a type of Phorian tobacco cigarette.

Brash, crude and dim-witted, Vadim was a former member of a Khiendai Tiervan street gang. He was ejected after displeasing his boss, Laszlo, and is currently in the service of Tevoran and Company, where his antics often cause his teammates great annoyance. Vadim cares only for the simplest pleasures in life, namely fighting, drinking and fornicating. Like the other members of his ethnic gang, he speaks in a bizarre cant rife with obtuse slang.

An elderly Tiervan pharmacist and erstwhile employee of Boris. He is Tevoran's personal narcotic supplier. Casimir hopes for a quiet retirement in which he can pursue his craft in peace.

A lewd yet matronly woman from a small village in Outer Niendam. Seeking excitement, Oksana journeyed to Tierva, where despite her lustful proclivities she eventually joined the Church of Ecthain as a nun.

A girl of few words, who claims to be from a village called Setora but seems somewhat confused about her origins. She is met by Tevoran and Company in Pagoya Hole, where she is rescued from an unpleasant encounter with two drunken Redshields by Ysabel's rather impetuous intervention. She is being pursued by the forces of both Vorona and Hrvain for unknown reasons. She is gradually revealed to possess a wide array of supernatural powers, a penchant for cannibalism, and may or may not be the reincarnation of a certain Voronese deity.

A Hillman, master of the Hidden Art, and amateur percussionist. After desperation drove him to criminal acts, he was defeated by Tevoran and Company, and now serves them in hopes of matching their martial prowess.

A machinist, gunner, and smuggler living primarily in Masori and Vorona. Enjoys fine wine and destructive weaponry of all sorts. After the fall of Masori to Voronese forces, she joined Tevoran and Company, though her reasons for doing so are unclear.

Prince of Vorona, eldest child of Oskar, and brother of Rudolf and Vera. Upon returning home from a military campaign, Martin questioned his father's policies, and was disinherited in favor of his younger brother.

Princess of Vorona, youngest child of Oskar and sister of Martin and Rudolf. With her pure heart and magnanimous nature, she is well-loved by all the people of her kingdom. Later, after being rescued by her brother, she teams up with Tevoran and Company, becoming the newest and quite possibly youngest member in their growing clan
Major Antagonists

Chancellor of Vorona and chief advisor of Oskar. He is rumored to be responsible for Vorona's recent aggression against its neighbors, and is sometimes claimed to be the true power behind the throne. In reality, a cunning, manipulative sorceror who's controlling the King for his own purposes. His ulterior motives are largely obscured, but along with the Cloaked Woman, he pursues Aizu for unknown reasons.

A mysterious practioner of the supernatural arts. Working in league with Hrvancais forces, she pursues Aizu for unknown reasons.

King of Vorona; father of Martin, Rudolf and Vera. He currently seeks to reconquer the “breakaway” nations that were once part of Vorona's greater empire. Some question the extent to which his policies are influenced by Duriken, his chancellor.

Prince of Vorona, son of Oskar and brother of Martin and Vera. Rudolf has grown increasingly unbalanced in recent years, and has known addictions to drugs and unorthodox sex practices. Nonetheless, he was recently declared the new Heir of Vorona.

Lord of a minor noble house in Tierva. Infamous for his heavy use of drugs, and known to keep his personal guard in an intoxicated state at all times.

A priest of the Church of Ecthain, leading the local congregation in Tierva.

Two of four quadruplet brothers, and members of the Redshields, a notoriously brutish, violent and highly inbred force of mercenaries originating from the rural regions of Vorona.
Bosses, Chapter Two

Overbearing boss of a Tiervan jail, prone to hyperbolic ranting and obsessed with his own masculinity.

An enormous, brutish creature encountered among the Subhumans during Tevoran & Company's journey along Zofia's underground railway.

An unhinged denizen of Vorona's sewers, and recent recipient of supernatural powers over his foul domain.
Bosses, Chapter Three

"I'll make sure you're all taken care of...forever!"
Lord of a manor on the marches of Vorona, and cousin of that nation's royal family including Martin and Vera. In the past, Gilbrecht promised Martin that he would be offered sanctuary in the event of any disaster befalling the country. After his betrayal of the royal siblings was revealed, along with his role in Vera's capture, he was laid to rest by Tevoran and Company.

A former member of Tierva's Triumvirate of Lords with a particular fondness for steaks. Discovered to be running a slaughterhouse disguised as a brothel, to which he would lure the city's Bronoi residents, "process" them, and distribute their remains as food to their kinsfolk. Tevoran and Company put a stop to his antics on Leithar's orders.

The foremost (and only) bard in the realm of Niendam. Prefers the gentle arts of music and poetry to the more red-blooded pursuits favored in his country. His perceived weakness drove his wife Oksana to abandon him and journey to Tierva in pursuit of excitement.

"It's only going to get worse..."
A bizarre entity whose very existence is debatable, given its appearance to Tevoran and Company after their inhalation of hallucinogenic vapors. Phantom or otherwise, it was destroyed through the party's efforts.

Once one of Tierva's Triumvirate of Lords, noted for both his seriousness in upholding the law, and for his abundant perspiration. He arranged their systematic elimination of the other lords to assume High Lordship of the City. Leithar's takeover of Tierva was brief, for Tevoran and Company overthrew him in favor of the present High Lord, Milan.
Side Characters

A somewhat opportunistic purveyor of goods encountered by Tevoran and Company during their stay on the Eastern Plains. Provides the party with Aizu's axe free of charge.

Chief of Tierva's Triumvirate of Lords. Given to excessive alcohol consumption, with a habit of slurring, and prone to strange gesticulations. Pesko's death effectively disbanded the Triumvirate, and left Tierva in control of Leithar, on whose orders Pesko was assassinated.

Daughter of Reynold, and keyboardist in his musical ensemble. Recently employed as a brothel receptionist. Cordelia grew up seeing her father as a paragon of honor, but his recent actions have brought this status into question.

Named the Nomad King, he ruled over the warriors of the Niendan Confederacy. In many ways the embodiment of his people, he relished the pleasures of combat, fornication, and above all the delights of the bottle, with little tolerance for weakness and a certain disdain for the more "civilized" peoples of the Valelands. A reckless charging attack aimed at Fallon left him utterly obliterated by her sorcery.

I always wanted to play the triangle
An disheveled yet ubiquitous background character who has appeared in every chapter of World's End, usually in a disparity of settings and positions. Despite his nondescript roles and lack of name, his appearance is far too unique to mistake. It's unknown what part he plays in the story; rather he's merely meant as a joke, or if he'll be revealed to have a larger function in the series further on in the series.

Ivan's father and older brother of Milan Vaclav, as well as an old companion of Edwin Tevoran's. He's never been shown in the game proper but often hinted to in the codex and some of the characters' dialogue. According to what we know so far, he was afflicted with pent-up wanderlust as a young man and adventured across the world, briefly settling in Phoria, marrying a local woman and fathering Ivan. For reasons unknown he left Phoria, purportedly to return to Tierva. His current whereabouts are unknown.