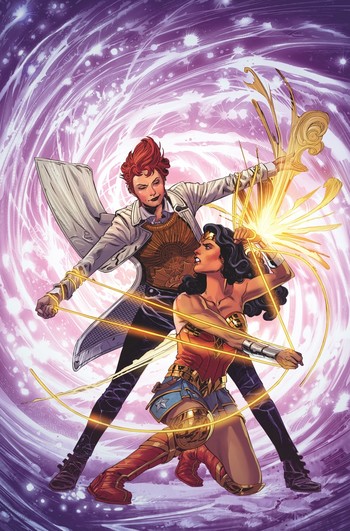 "When I heard you had killed Ares and began strutting around as the "God of War," I thought to myself... now that is the arrogance of an Amazon. Taking what doesn't belong to them all while acting like a god's gift to women."
— Circe to Wonder Woman, Superman/Wonder Woman #16
Advertisement:

DC Comics' version of the Ancient Greek sorceress from Classical Mythology and Homer's The Odyssey. First appearing in Wonder Woman #37 by Robert Kanigher and Harry G. Peter in 1949, Circe would at first only make a variety of scattered and intermittent appearances in multiple DC Comics books, not just Wonder Woman's, in the Pre-Crisis continuity.

However when DC rebooted it's continuity in 1986 and the Wonder Woman title would be relaunched, Circe would become inextricably tied to Wonder Woman's larger mythos. While her motives for her enmity with Diana have been frequently subjected to Depending on the Writer; ranging from either hating the world of peace and equality that Diana wants to create, to trying to prevent a preordained prophecy, to having a pre-existing rivalry with Hippolyta and the Amazons and sees targetting Diana as a form of revenge, or simply just because she get's a kick out of it.. Circe has nevertheless become one of Diana's most persistent and dangerous foes note  Surpassed only by Cheetah and Ares in terms of prominence, being the source of a many calamitous events in her history.

Elseworld and Other Appearances

Tropes associated with Circe include: