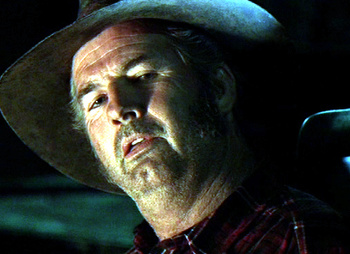 I could tell ya, but then I'd have to kill ya!

Played By: John Jarratt
"What the bladdy hell are you sheilas doing out here?"

The Big Bad of the series and it's only character, besides the Australian Outback itself, to appear in all five works to date. Raised in the rural boondocks of Eribil, Queensland in the 50s to an abusive tracker father and a weak willed, catatonic mother (both alcoholics) whose family name is sadly losing it's former prestige, young Mick was frequently beaten and downtrodden. One day, while exploring the wilderness with his little sister (and being accosted by a mentally simple man), tragedy strikes. Mick states that the simpleton abducted her, and his father executes the man in vigilante justice, butchers his corpse and leaves it for the dingoes to feast on. However, it gradually comes to light that Mick was not being entirely truthful. Forced to flee, Mick lives off the land and gradually evades his father using their knowledge of tracking behaviour, then camps out in an abandoned shack, having to eat rats and facing a terrible fever to survive. He confronts his parents, and is sent to a foster camp which also hosts Aboriginals. Changing his last name to "Taylor" after his childhood best friend and bullied daily, he eventually retaliates by beating another boy so badly that his eye hangs out of it's socket by the stalk. Only barely evading serious punishment for this, he goes to work on a cattle and sheep farm out in deepest Western Australia as a teenager with several other hard man types who also have a lot to hide.

Mick starts to lapse into his impulsive, murderous tendencies again, and gradually attracts the attention of Cutter, his older Kiwi nemesis. Cutter warns him that there are "Others" who make the greater surrounding area their territory, and tries to manipulate Mick into clearing the field for the pair of them under threat of blackmail. But Mick kills him and takes up the quest of his own desire, and also to recover one of Mick's murder weapons Cutter planted somewhere in the lairs of one of the Others. He quits his jackaroo work, starts as a freelance dingo tracker, enters into a relationship with a prostitute and starts stalking the rest of the serial killers. He finds each, narrowly escaping them, but not without butchering a few more innocents himself. This draws their attention directly to him, but he just manages to take them all down and thus more or less make the great Outback his exclusive hunting range. He then decides to enlist for the army, specifically to be posted to Vietnam and hone his "craft" out there. A corrupt sergeant takes Mick under his wing and lets him join in in spoils of rape, slaughter and torture. It is in 'Nam where Mick learns the "Head In A Stick" sadistic paralysis technique. Back at home, he puts his sharpened skills to use, preying on a group of bus tourists.

Several decades later, in 1999, Mick meets the protagonists of the original Wolf Creek movie. His MO is clearly established: find a small group of tourists (preferably with one or more women among them), disarm them with his seemingly friendly manner, drug them, take them to one of his numerous lairs and torture/play with them, eventually raping the females and killing everyone according to his own whim. Only Ben Mitchell escapes this attack, and at the price of considerable physical and mental turmoil. In 2010, Mick repeats the cycle, killing a pair of jackass cops before going after a German couple. The woman manages to escape and seek refuge in the car of Paul, an English surfer, but she meets a bitter end at the hand of Mick's rifle. Infuriated, Mick chases Paul all across the outback for revenge and finally captures him. Subjecting him to some Fingore sadism and rigged quiz questions, Paul tries to escape but is recaptured by Mick, who then frames him for some of the murders and causes him to lose his sanity. Six years later, Mick happens across an American family of four. He massacres them, but unbeknownst to him Eve the daughter survives her injuries and recovers. Going on a Roaring Rampage of Revenge, she sets out to track him down and end his reign of terror. He gradually becomes aware of her journey and attempts to find her himself, leaving a fresh trail of bodies in his wake.