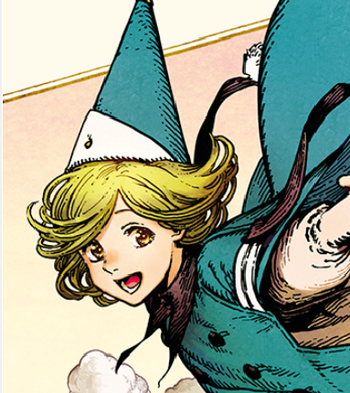 "It's so pretty no matter how many times I see it. Magic is amazing!"

The protagonist of the story. A young girl and a seamstress' daughter who dreams of one day becoming a witch, who ends up having her dream fulfilled at a terrible cost. 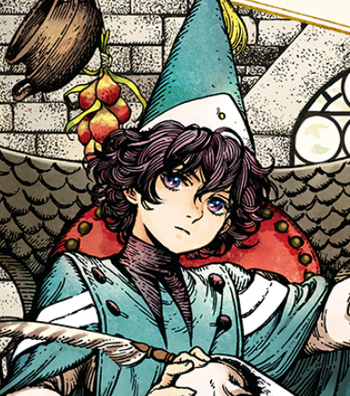 "It's a pity what happened to your mother. It's your fault. She'll never be human again."

An apprentice at Qifrey's Atelier, Agott is a perfectionist who, at first, is at odds with Coco. 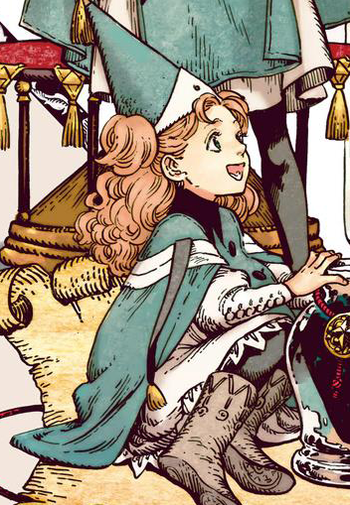 "I love it when people thank me! So thank you!"

A friendly apprentice at Qifrey's Atelier. 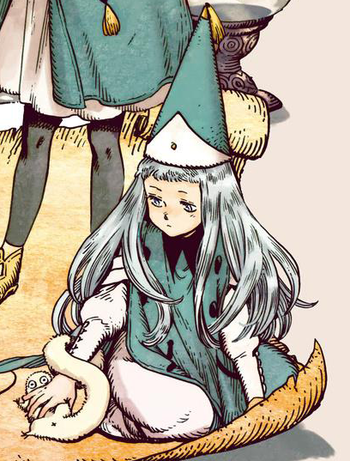 "What path can I take so that Richeh can be the Richeh Richeh wants to be?"

A seemingly emotionless and childish apprentice at Qifrey's Atelier. 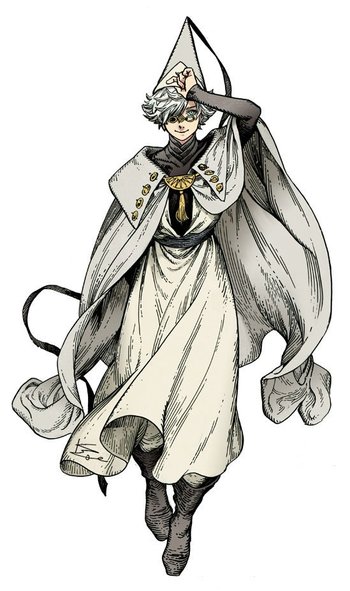 "The world is simply full of magic that exists to make people happy."

A fully-fledged witch that takes Coco under his wing after her mother is petrified, Qifrey runs an atelier where Agott, Tetia, and Richeh study as his apprentices. His childhood friend Olruggio lives next door and serves as the "watchful eye" of the atelier, making sure Qifrey's students aren't getting in trouble.

As a child, Qifrey studied magic under the tutelage of Beldarut. Events in his past have driven him to hunt for information on the Brimhat witches, and may have influenced his decision to take on Coco as an apprentice. 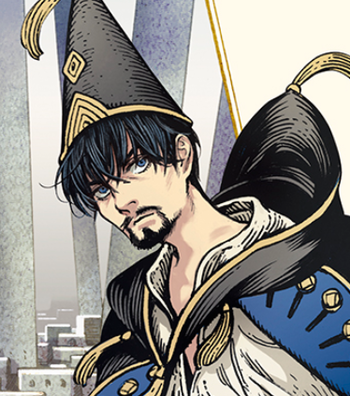 "I'm the watchful eye. Can't have you getting sick on me."

The "watchful eye" of Qifrey's atelier, he mostly keeps to himself in his own atelier to meet his deadlines for creating magical items, which he specializes in crafting. 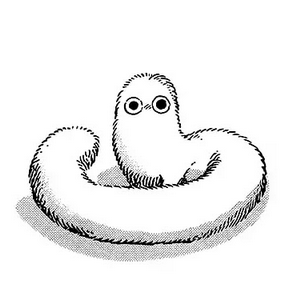 A small animal that is attracted to magic ink. Coco takes him with her after her first test. He becomes the atelier's pet. 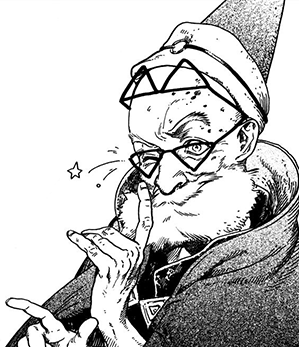 An old witch who runs the magic supply shop known as "The Starry Sword" in Kalhn with his grandson Tartah. 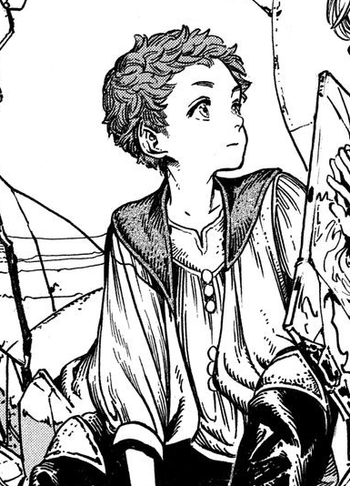 Mr. Nolnoa's grandson. He's a young boy with an optical condition which from birth has rendered him colorblind, and because of that, he can't be a witch. 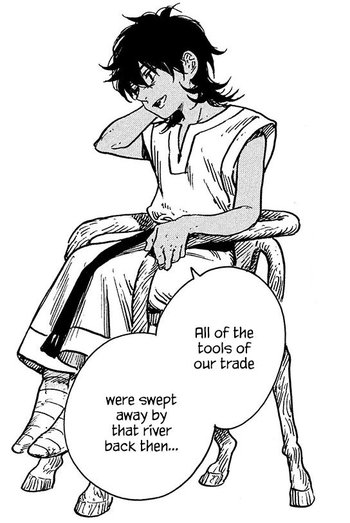 An orphan who was taken in by a minstrel named Dagda, Coustas lived his life on the road until an accident injured his legs. Now he's stuck in Kahln while he heals. Coustas and Tartah have taken to studying herbal medicine at the Kahln Healers' Clinic as a way to pass the time.

"Oh my, how promising... a world of difference from my little dropout here. No matter how many times he takes it, he can't seem to pass properly."

Head of his own Atelier and Euini's mentor, Kukrow is a haughty, disdainful witch. Kukrow's cruelty towards Euini is one of the major drivers of Euini's lack of confidence.

Though he acts callous towards Euini, Kukrow is shown to conduct himself in a fawning, sycophantic manner when confronted with those in authority over him, specifically Estheath of the Magical Security Council. 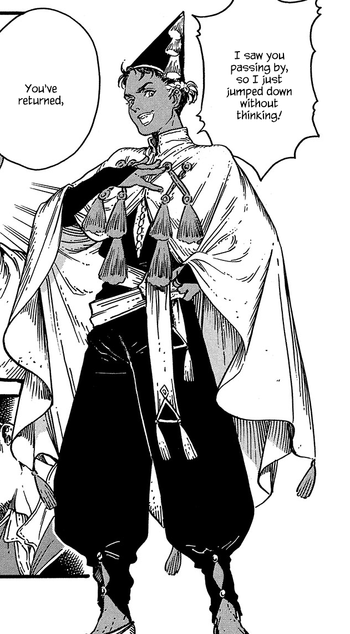 "As expected of my senior! You're so cool! Seriously, pleeeease let me call you my master!!"

An acquaintance of Olruggio's from their time as apprentices, Hieheart has grown up and taken on a pupil of his own. Hieheart looks up to Olruggio for his craftsmanship and ability to solve problems, calling Olruggio his "Senior" and often joking that he'd like Olruggio to take him on as a student. 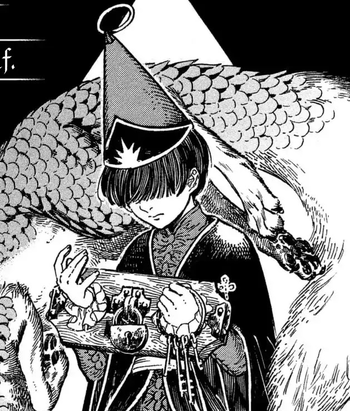 "The only thing holding me back is my own reflection."

A shy and insecure apprentice who has failed the second test many times and is taking it yet again with Agott and Richeh. 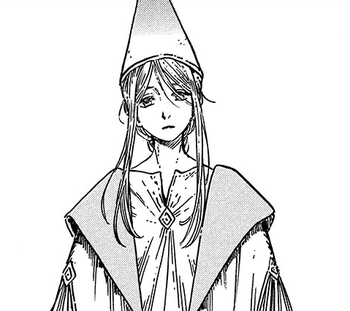 Richeh's older brother. Richeh was abused by his teacher until he became depressed and almost catatonic, before fleeing his previous atelier and being taken under the tutelage of Sage Beldarut. 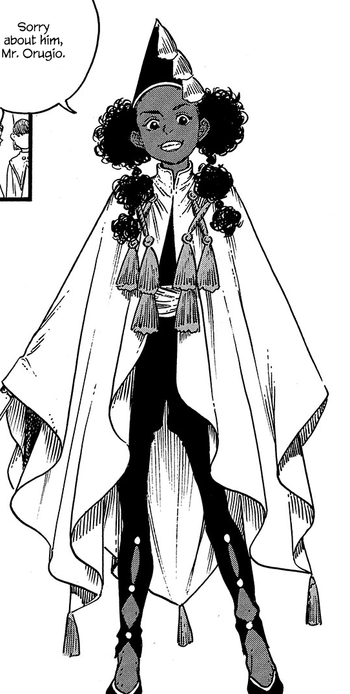 "If choosing between the two is too difficult, then maybe it's not about choosing one or the other."

Hieheart's pupil in the magial arts, Jujy is a sweet girl and an attentive student. When she's introduced in Chapter 39, she is accompanying Hieheart on a magical job request for the nobility of Claude Territory.

The Council of Magic Security

"Right now, peace and order is being preserved only because all witches strictly obey the law. Needless to say, peace is extremely precarious. The smallest fissure will send everything crashing down, so there can be no exceptions to the rules."

A deputy officer of the Council. He's a cold and aloof man that thoroughly follows rules and commands a group of other officers.

"I was never one to work at a desk, cooped up all day. I chose the spear over the pen early on."

A member of the Council who works directly under Estheath.

"Let's race to see who can find a dangerous relic first! Come on, Etoran!"
"This isn't a game, Echo. Nor is it training! It may be my duty, but I don't want to have to babysit my little brother!"

A pair of rowdy twins working under Estheath in his hunt for Brimhats.

A serious member of the Council of Magic Security.

A level-headed and serious member of the Council of Magic Security. 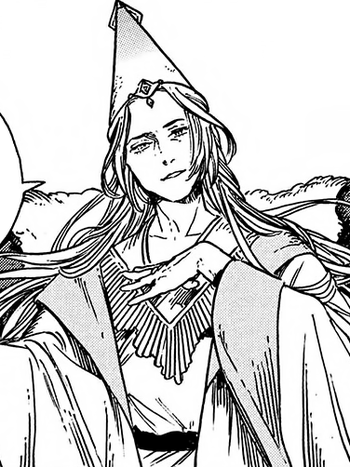 "Education, after all, is predicated on interest."

One of the best witches in the world, responsible for overseeing the education of new witches and called The Sage of Instruction.

Years ago, Beldarut was Qifrey's teacher and protector. In the present day, he's taken on Richeh's brother Ririfin as an apprentice. 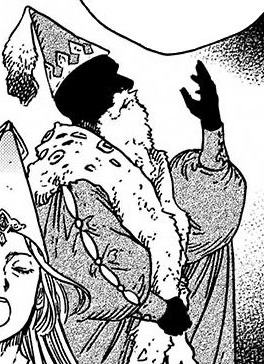 One of the best witches in the world, responsible for negotiating foreign relations. 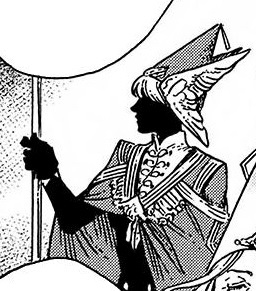 One of the best witches in the world, who adjudicates transgressions of magic law. She wears the winged cap of the Magical Security Council. 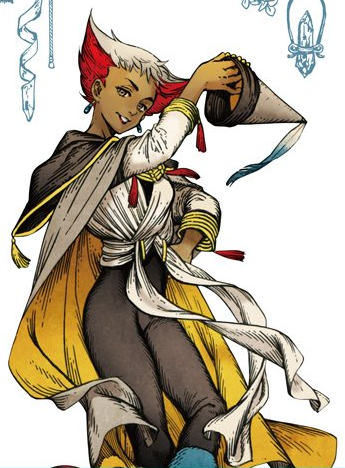 A friend of Qifrey's who lives at the Witch Auditorium, and the proctor for the second test for witches.
Sinosia 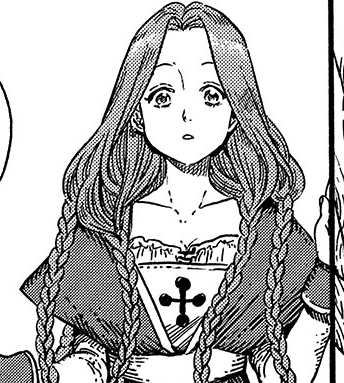 "I suppose you're not willing to tell. Witches love their secrets after all."

While not a witch herself, she works as a doctor in the Great Hall. 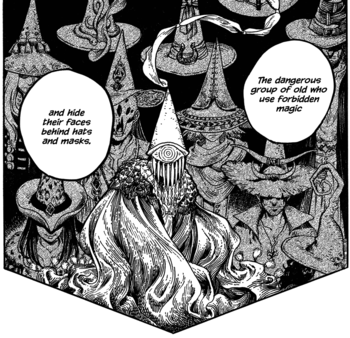 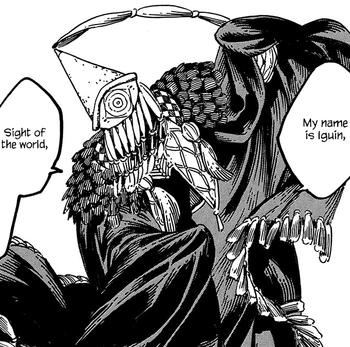 "My name is Iguin, Sight of the World, The Lidless Eye. Fear not, savior. I had never intended to cause you pain."

A strange Brimhat with an eye covering his face. He was the one to give Coco her magic book and seems interested in her. 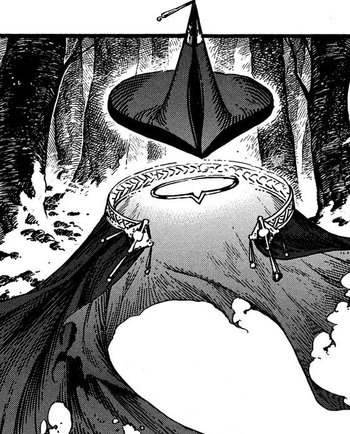 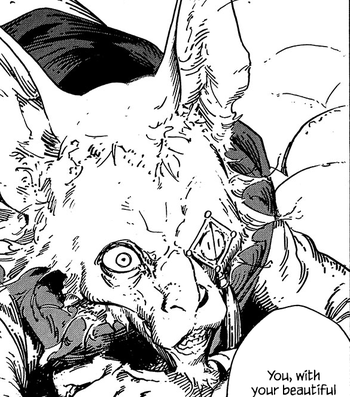 "Three kinds of people lurk in the darkness: guilt-stricken sinners, pain-averse cowards and prey-stalking hunters tracking their quarry... which one are you?"

A Brimhat witch who makes his first appearance during the second test, taking the form of a floating hat and cape. It would seem Sasaran has no apparent physical form, and thus can't be countered or attacked — unless his appearance is another Brimhat trick... 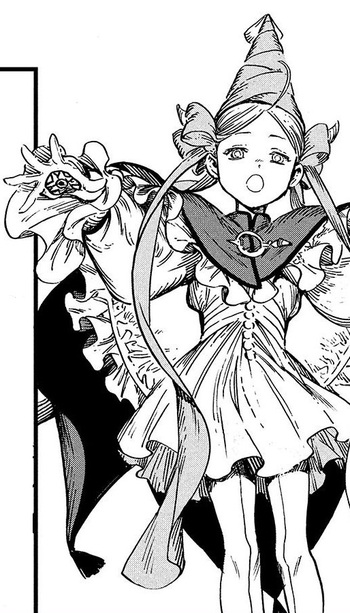 "There are ways to help, but the methods have been suppressed. The ones who won't help are the bad witches."

A mysterious young witch and the apparent apprentice of "Lord Restis," Ininia uses time magic to heal Dagda after he and Coustas are attacked by bandits. Though she initially appears with a pointed hat, she openly declares that those who refuse to use their magic to heal others are "imposters," and that "only those who wear the cap of old" are true witches. 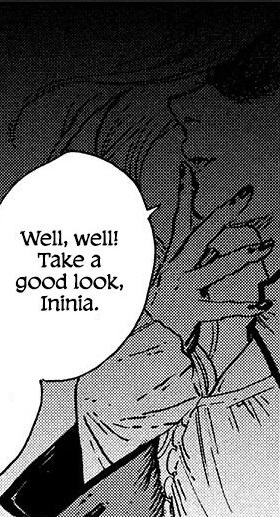 "Saving people is our duty, after all!"

A mysterious figure who communicates with their apprentice Ininia through a magic staff. Though Lord Restis claims that witches have a duty to save people, the methods they teach go against every law of the Witches Auditorium. It is unknown if or how Lord Restis is connected to the Brimhat witches, but they espouse a similar ideology and permit Ininia to use forbidden magic.