Characters / Warriors of the World

The Character page for the Warriors of the World fanfic trilogy. Includes the characters from all three instalments and the prequel, but only from the rewritten versions and not the original.

Note that as a character page there will be unmarked spoilers. Beware.

The Normans are characterised by being average at everything, but can specialise in multiple skills at once and have high adaptability. Because of this they are able to populate Midgard relatively well in most regions compared to the Beasts.

Contrary to perception, the Normans are not fully human. All Normans are classified as "demi-humans", although the reason for this remains unknown. Nevertheless, Normans use the word "human" as an adjective, but will otherwise refer to themselves as Norman. Anyone who calls the Normans as a race of humans is not of the Norman race, as they don't quite understand the history behind the Normans.

On the unnamed continent where the fanfic takes place, Normans live in three countries: the Kingdom of Rune-Midgard, the Republic of Schwarzwald and the Arunafeltz States. Warriors of the World is solely Kingdom-centric.

The Raulus
A band of eight mercenaries who party up as a result of a mandatory mercenary decree in the face of a possible 'threat' endangering the Kingdom of Rune-Midgard. Originally only intending to seek out the source of said threat, they very soon become the only mercenaries who can stop the threat.

Tropes applying to all the members: 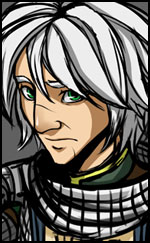 "If you're good at something, never do it for free."

A mercenary knight commander from the Mercenary Knights' Battalion, Military Division, Royal Prontera Chivalry. He is a veteran of war at 39 and finds his own company more than sufficient comfort. However, after he is forced to lead a part of ragtag mercenaries who are as willing to team up with him as much as he does with them, things from his past begin to bubble up and he has to struggle dealing with them. Wears a visor (Helm) paired with fins in front of his ears (Fin Helm).

Should be noted that Valkron stands at 5'6", or 1.68m for the metrically inclined. His lack of height is oft remarked upon. 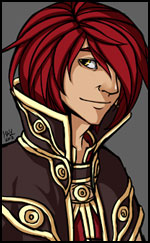 "And women tell me everything."

A wizard who stands at 6'02", with flaming red hair and gold eyes. Despite his height he tries to make himself as small as possible. He is a skilled ladies' man, but at the time of meeting Valkron he's more interested in finding somewhere to belong and not stick out like a sore thumb. Wears a pair of headphones (Headphones) and constantly chews on a leaf (Sentimental Leaf) for which he persistently denies is not a drug. 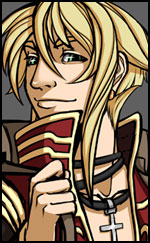 An arrogant and haughty priest, well-read, highly intelligent and proficient in his work but tends to take on an insufferable "I'm better than you" air with regards to his achievements and capabilities. As much as Valkron would love to kick him out, he's a vital member of the party since he heals anyone as long as they ask and he's good at it. Has an argumentative streak because he feels the need to be always right. Wears a black peaked cap (Boy's Cap) and has a gold earring on his left earlobe. 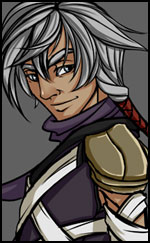 "I'm more of a friendly assassin. If you want to smirk or laugh, please do so now and get it over with."

Contrary to stereotypes about the assassin class, Khan is friendly, amiable and good-natured. He'll listen to anyone who has problems and will keep their secrets for them. He likes to go with the flow in an absent-minded frame of mind. Amaru describes it as a switch that involuntarily flips on and off; Khan puts it to having had one too many bangs on the head in his life. Wears a conical straw hat (Sakkhat). 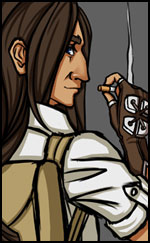 "I only speak when necessary."

A chain-smoking blacksmith who is always seen around with Khan, and a man of few words. Very little is known about him because of this, but he is efficient in battle, has a sense of honesty and honour, very considerate and very dilligent. Although he is not predisposed to forging, he works hard at every smithing job he takes on to make sure the product is quality. Wears a headband to keep his hair out of his eyes while forging. 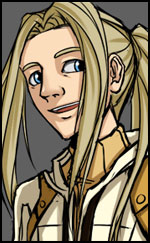 The youngest of the party and therefore the most easily underestimated. He is also the most immature and blunt person in the group, though he doesn't always notice why and how. Of the entire group he's still looking at the world through rose-tinted glasses. Unfortunately the hunter also has an argumentative, hard-headed streak to add to that, and usually gets into verbal rows with Samaroh. Is Eni's younger half-brother. 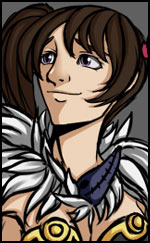 At first sight it's fairly hard to believe that the alchemist is Nocturne's older half-sister; she has brown hair and purple eyes compared to Nocturne's sandy blonde and blue eyes. Much more grounded than her sibling, she hates it when people argue. The most feminine and the least cynical of the two women in the group, though she is fairly realistic, and also the most indecisive. She prefers to think ahead and can't really think on the fly. Recognisable by her bunny ears headgear and her pet Lunatic, called Fluffball. 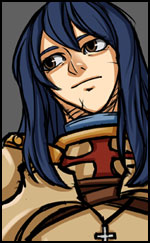 A crusader from the Order of Juno who meets Valkron via her more quirky party members Eni and Nocturne. She is quiet, reserved and cool-headed. Like her fellow party members she is not someone to be trifled with; her skill with the sword and shield, and the ability to heal and deal out a world of hurt with her white magic (and her shield) give her an edge over the rest of the party members. Wears a blindfold during battle to hone her concentration.

Introduced in Soldiers of Fortune

A young knight, previously a student of Valkron's. He is somewhat arrogant and believes he's better than Valkron in many ways. Starts wising up a little in the later half of Soldiers of Fortune and begins to appreciate his ex-tutor's teachings a little more after he understands the worst enemy he has to face down in his entire life.

An old crusader, retired from mercenary days and more keen on his theology studies and being a guild leader. Makes his first appearance in Soldiers of Fortune as an old friend of Valkron and Iruna's. His rank in the Holy Order is Major-General, and apparently he knows Valkron from the days since he was a corporal, and Iruna from her days as a private.

Leads the Exodus Faction, based in Greenwood Lake in Payon.

Knight Commander Sir Devar first appears in Soldiers of Fortune as one of the knights leading the refugees from Prontera to Payon. Apparently works in the Finance Division of the Chivalry, making him a non-fighting knight.

A group of knight commanders and one senior crusader (Anox) who get assigned along with Valkron and Edell to help with the Pronterans moving to Payon. They appear from time to time throughout Soldiers of Fortune in Meanwhile Scenes, mostly to give the audience an outside view of the events of the story.

A mercenary monk who tags along with the Raulus from Chapter 14 of Soldiers of Fortune. Although the party is full by now he begs to join because of a mandatory mercenary decree. After some agreement the Raulus party lets him come along.

A young trainee crusader working alongside the Chivalry knights to help escort the Pronteran refugees. Gets dragged into the events of Soldiers of Fortune against his will.
Introduced in Flight of the Phoenix

The name is a collective noun for the semi-intelligent and intelligent monsters that roam the wilderness of Midgard. Apparently the Normans find it odd to disrespect these creatures even though they occasionally terrorise the Normans. There are various types of Beasts, including the boss Beasts (note the lack of capitalisation on the 'boss').

Boss Beasts are the MVP monsters of Midgard, and are feared by the Normans for good reason. Boss Beasts are incredibly ancient and powerful, and hold control over a small group of subordinates. They also understand and communicate in a language all Beasts can understand. It is thought that boss Beasts, if they so desire, could rally all the Beasts of Midgard to their side if they wish, but in general they don't because they're intelligent enough to not want attention.

Contrary to popular belief among the Normans, the Demons do not count under the Beasts classification.

Boss Beasts
Boss Beasts are feared and renown across the Kingdom of Rune-Midgard for their immense power and connection to the world itself. They usually have a small group of subordinates or minions at hand. In general it's not a wise decision to invoke their wrath, as they are believed to have the power to rally as many of their subordinates as they wish, but Norman adventurers do it anyway because these bosses may carry powerful items or wield great weapons that are highly coveted. 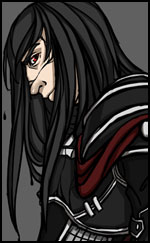 An undead Magic Knight who has been resurrected to restore the Old Empire. He delights in Mind Control, brainwashing and Mind Rape in order to get people to do whatever he wants. His description includes being very tall and wearing black and silver armour, but the most significant thing about him is the blood that runs out from his hair down his face.

The Demons are a mysterious race living in Midgard for unknown purposes. They have erratic whims, sometimes choosing to terrorise the Normans, other times waging war against the boss Beasts. No Norman is clear on their actual reason for existing in Midgard at all. The only knowledge about the Demons is that they originate from a magical plane not accessible by Normans called Oblivion.

Some Demons are mistakenly classified as boss Beasts by monster scholars. 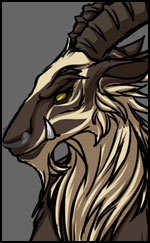 A seven-foot-tall half-goat, half-man with fangs. Known as the Lord of Darkness, he is an old, cunning demon who has lived alongside the humans. He seems to have developed a liking for humanity.

First appears in Soldiers of Fortune.