Notice: Being one of the series in the Warhammer 40,000 universe, some of the tropes related to their own races will also apply to them. Also, this sheet will contain some unmarked spoilers. 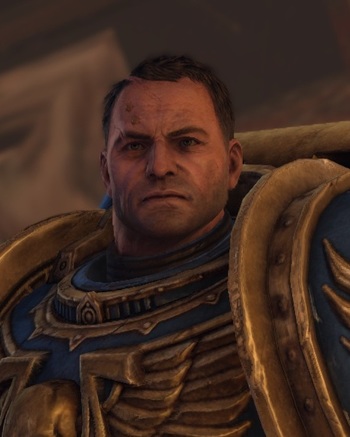 Captain Titus is the commander of the Ultramarines' 2nd Company, and personally takes part in the defense of Forge World Graia. Relatively young for a Space Marine, he is a decorated veteran of several major campaigns, and his exploits have earned him a reputation as one of the mightiest Ultramarines in recent memory. The men under his command are dearer to him than his own life, and if one of them is killed, Titus will not stop until the enemy responsible has paid in blood.

Titus still mourns the recent loss of his mentor, Captain Trajan, who was killed by Eldar in a routine mission Gone Horribly Wrong. Titus held Trajan to be the ideal of Ultramarine nobility and honor. Now that he has inherited command of Trajan's company, Titus aspires to be the kind of leader that Trajan was.

Titus was always interested in the thinking behind his enemy's tactics ever since he first stepped on the battlefield. With every battle, he experienced firsthand how differently each alien species and daemon horde fought on the ground, and gradually, patterns emerged. To better understand the enemy and their motivations gives him insight into their strengths and weaknesses, and into how to exploit those weaknesses in battle. His ability to predict how a group of enemies would attack saved many lives over the years. Now that he’s a Captain, Titus works to instill the same critical thinking in the men under his command. 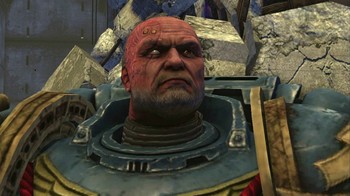 This day is getting interesting...

Sergeant Sidonus has been a Ultramarine for over 200 years, and serves as Captain Titus' second-in-command. He is also Titus' closest friend and confidant.

He's seemingly seen it all, with a "been there, done that, no problem" attitude and dry sense of humor that instantly serve to defuse tense situations. But when faced with the enemy, Sidonus is their worst nightmare – a brutally efficient warrior who won't stop until every enemy lies dead at his feet.

Sidonus bears the marks of his extended service to the Imperium – including a bionic arm to replace one lost in battle against the Tyranids. When an Eldar weapon destroyed his eye and part of his face, Sidonus decided to leave the scars in place as a reminder of his victory over this formidable enemy.

Leandros is the most recent inductee to the Ultramarines command squad. He is a "by the book" Ultramarine, and often speaks with little tact, since to his mind, all actions must serve the Emperor. He looks up to Titus and Sidonus, especially Titus, whom he sees as the type of Ultramarine he aspires to become.

He will question the motives of anyone he suspects of not giving their all for the Imperium, and has lost perspective on what it's like to face the horrors of the universe from a normal human standpoint, and is patronizing to the surviving Imperial Guardsmen he encounters.

He sometimes goes overboard in pursuing what he thinks is a noble course of action, because he wants to prove himself and his abilities.

A squad of Blood Ravens who joined the Imperial Liberation Fleet, they help Titus reach the Orbital Spire by fighting across a Chaos-held bridge.

Second Lieutenant Mira leads the survivors of the 203rd Cadian Regiment. Mira's experience and skill as a tactician, coupled with her uncompromising humanity and refusal to give up, commands fierce loyalty among her men.

The 203rd Cadian Regiment was en route to another warzone when their troop carrier was suddenly diverted to Forge World Graia, as they were the only Imperial Guard force close to the planet. The Regiment was the only force that managed to reach the surface before the Orks captured the planet's defense guns.

They were crippled after the Orks cut them off from orbital support and reinforcements, forcing Lieutenant Mira to take command (albeit with the dying Regimental Colonel's consent), as she was the highest ranking officer left. All she wants is to save the soldiers she's sworn to lead, but she does not hold much hope of holding off the Orks much longer.

Inquisitor Drogan is a relentless psyker of the Ordo Xenos, and bears the physical and mental scars of a lifetime spent in the darkest corners of the galaxy.

Many years ago, he fell into the hands of fiendish aliens who tortured him for years. Since then, his hatred of alien species has driven him to develop innovative new ways of destroying them, and to pursue technologies and techniques thought lost or impossible.

His greatest creation is the Psychic Scourge, which channels tremendous amounts of Warp energy, provided by the Power Source, that can be tuned to destroy specific species, while leaving humans unharmed. Audiologs reveal that he was developing them at the behest of an Inquisitor Lord to find a way to free the Imperium of its need for classic Plasma power generators, which are very powerful, but highly bulky.

An Inquisitor who accompanied the Liberation Fleet. He appears briefly in the epilogue.

Warboss Grimskull leads the Waaagh! invading Forge World Graia, and is extremely cunning. As a result, his Waaagh! is well organized, making it all the more dangerous. He has conquered several worlds before reaching Graia, and if he gets his hands on the Warlord-class Titans on the Forge World, he could be unstoppable.

Nemeroth is the leader of the Chosen of Nemeroth Warband, which is invading Forge World Graia. He is a Chaos Sorcerer Lord with strong psychic powers, and is equipped with Terminator armor and a pair of Lightning Claws. Like most Chaos Space Marines, he is sadistic and arrogant.