"Always challenge. Always question. In the pursuit of a greater good, inaction is the only wrong."
— Master Zurong, on Huojin Philosophy

The Huojin are Pandaren following the Huojin philosophy, which believes that it is honorable to do everything you can in your power to protect home and family, no matter the cost, and that it is dishonorable to sit and contemplate when you can be taking decisive action. Unlike the Tushui, who believe there is a moral certainty to the world and a set right and wrong, the Huojin believe morals are flexible, and right and wrong change depending on the circumstances. As such, a Huojin master remains flexible in his or her thinking, constantly evaluating the greater good. 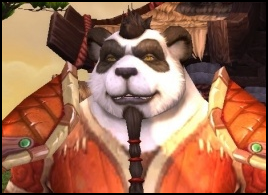 He's the fun side of the Wandering Isle.
"The way of the Huojin is not the way of violence. When fighting is needed, we will not hesitate, but when fighting is not needed, neither do we instigate."
Class: Monk

Leader of the Horde-aligned Pandaren. Brash and boisterous, Ji embodies the Huojin monk teachings; the belief that inaction is the greatest crime, and that fighting real battles to protect home and family, regardless the cost, is the only way to live. He joins the Horde because he's drawn to their nature of tragic monsters defending themselves in a world that hates them.

During the Siege of Orgrimmar, it's revealed that the Kor'kron were interrogating him to find out information about some Pandaren artifacts the Horde found in Pandaria, despite the fact that Ji wouldn't know about such things. They say if he doesn't speak, they will execute him. The players rescue him, and Aysa Cloudsinger comes to carry him to safety.

Ji Firepaw continues to make token appearances, still aligned with the Horde, in stories such as War Crimes and A Good War.