Characters / Wake of the Clash 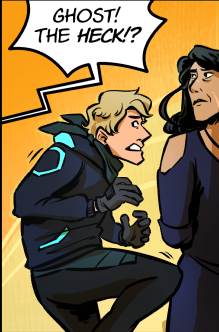 Ghost reacting to Airstrike shouting at him in Chapter 3
"I’ll have gravity effect… your FACE!"

The Protagonist: Liam Durand was the young telekinetic sidekick of Beacon City’s former greatest hero, The Clash, before he turned on the city and attacked the Waterfront District. Now a young man, Liam sneaks around the city trying to recover his missing mentor. Somehow he’s managed to make a few friends along the way... 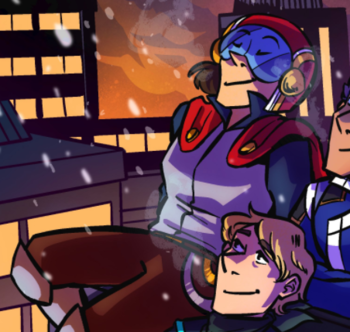 Airstrike enjoying the night air, from a New Year's themed drawing
"Ugh… The Clash!? That was eight years ago… It’s all about ‘’Airstrike’’ now!"

Airstrike is aiming to be the greatest hero Beacon City has ever known. Loud and brazen, and not afraid to toot her own horn she soars across the skyline and barrels down obstacles with her immense strength. She is often seen with her best pal, Racer, and their friend, Ghost, fighting crime and/or chasing off that pesky thief, Hourglass! 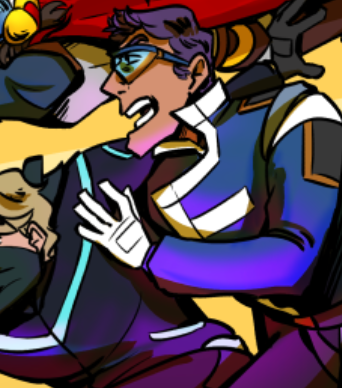 Racer sliding along with Ghost in tow in Chapter 1
"Strike! If I fall, I die!"

Tanner Torres slides along his glowing purple vectors lending aid to those in trouble. He is the most even tempered of the main trio, but doesn’t mind going along with Airstrike’s flashy antics. He just wants to be there to support his do-gooder friends. 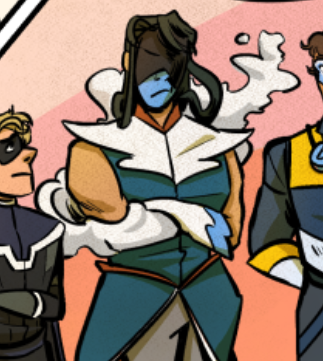 An image of Cirrus from a flashback in Chapter 2
"I’m not Cirrus!"

Abigail “Cirrus” Hoang was once a great hero who stood side-by-side with The Clash. She has since hung up her cape and cowl and serves as the Director of the Hoang Museum of Art and the Hero Registrar. Abigail has the ability to create solid cloud-forms that can lift her away into the sky. 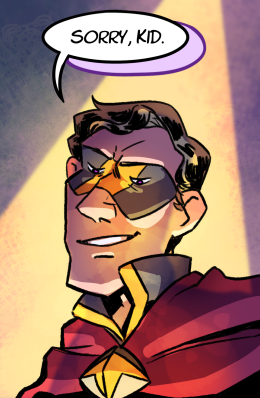 Clash, under the effects of mind-control, from the prologue chapter.
"You’re a kid. I’m in charge!"

Sal, aka “The Clash,” is Beacon City’s most infamous hero. Years ago, he was turned against the city by Sabre’s power, and destroyed much of the waterfront with the great beams of explosive light derived from his palms. Before then, he raised and trained young Liam in some capacity, but now he is nowhere to be seen. 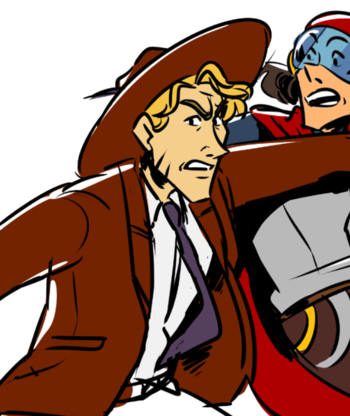 Hourglass holding Airstrike back from a color sketch on social media.
"...this is headed someplace dark and vendetta-y so I’m gonna bounce."

The Hourglass is a famous thief-for-hire with many fans. He is currently under [[Sabre’s]] employment, though Hourglass has a strong distaste for crimes of a personal matter. His popularity rivals that of even Airstrike, who he is often seen going toe-to-toe with. 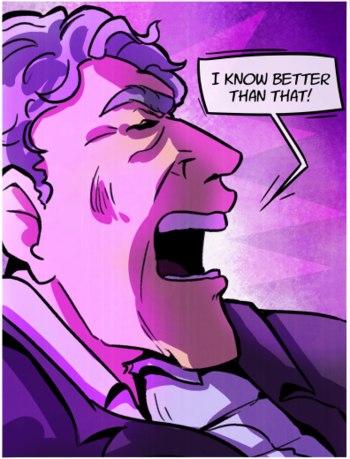 Sabre shouting at Clash in the prologue chapter.
"I’m not just another wacky villain, don’t pretend to pity me! I know better than that!"

A veteran of the villain world, Sabre took control of The hero, Clash, some years ago forcing him to attack the city. Sabre holds some sort of vendetta against Clash, and seems well adept at creating and selling devices for supervillains. 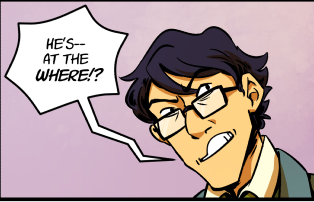 Noah Sato looking irate in Chapter 2.
"I think I had a nightmare like this."

The ever put-upon Detective associated with the hero-world. Noah Sato is seen working with his sister, Sherrin Sato, and Gravity Man. Noah has an irritable personality, and often snaps at others. He is set on uncovering the truth about what happened to The Clash all those years ago, and wants to know why the hero betrayed all of them. Noah is able to read the memories of others by looking at them, although it seems there are some chosen few who are immune. 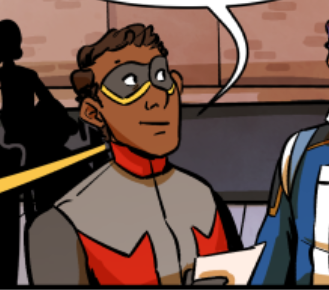 Gravity Man outside the bank in Chapter 2.
"That looks heavy… Let me help you!"

Another hero with a jolly love of weak jokes. Gravity Man, much like his name implies, is able to alter the gravity of objects by interacting with them using the sparks that leap from his fingers. Gravity Man appears to have a close relationship with Noah Sato, and keeps a friendly attitude among Airstrike and Racer. 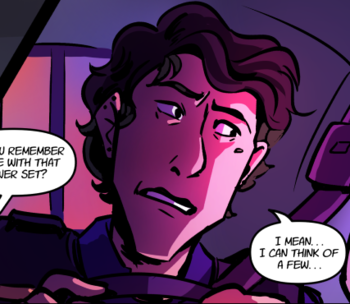 Sherrin at the wheel in Chapter 1.
"Noah, stop!! You’re doing it again! No driving from the passenger’s seat!"

Noah Sato’s younger, more likeable sister. Sherrin acts as a sounding board for Noah’s theories, and they both consider Noah’s search for answers in depth. She knows more than she lets on though, perhaps being the more astute sibling.