And now here they are! The most daredevil group of daffy drivers to ever whirl their wheels in the Wacky Races! Competing for the title of the World’s Wackiest Racer. The cars are approaching the starting line:
open/close all folders
Advertisement:
Peter Perfect (Driver of the Turbo Terrific)

First is the Turbo Terrific driven by Peter Perfect.
The Announcer

The Turbo Terrific
Voiced by: Daws Butler (1968 cartoon), Greg Burson (2000 video game), Jeff Bennett (Wacky Races Forever pilot), Diedrich Bader (2017)
A gentlemanly racer in the Turbo Terrific who's extremely strong but also very vain, and he often boasts about the virtues of his high-tech race car - which regularly falls to pieces seconds after he praised it. He is fond of Penelope and often helps her.
Rufus Ruffcut & Sawtooth (Drivers of the Buzzwagon)

Next, Rufus Ruffcut and Sawtooth in the Buzzwagon.
The Announcer 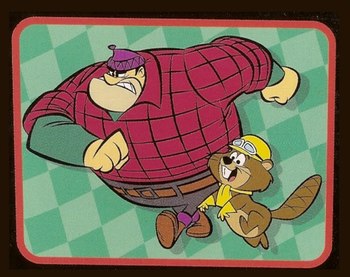 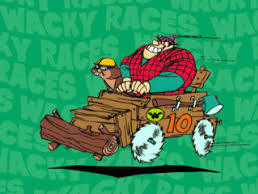 The Buzzwagon
Voiced by: Daws Butler (Rufus Ruffcut, 1968 cartoon), Don Messick (Sawtooth, 1968 cartoon), Greg Burson (Rufus Ruffcut, 2000 video game)
Rufus Ruffcut, a lumberjack, and his companion Sawtooth, a beaver, drive the Buzzwagon, which is entirely made of wood, features four circular saw blades as wheels, and Sawtooth is able to cut through obstacles (such as trees and other objects) at super-high speed.
Sergeant Blast & Private Meekley (Drivers the Army Surplus Special)

Manoeuvring for position is the Army Surplus Special.
The Announcer 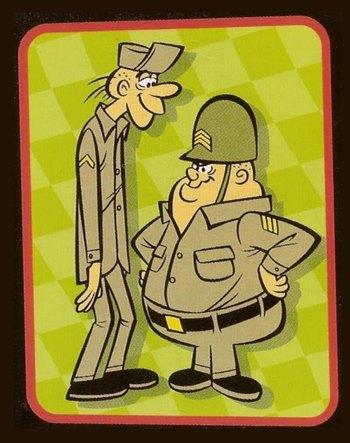 Right behind is the Ant Hill Mob in their Bulletproof Bomb.
The Announcer 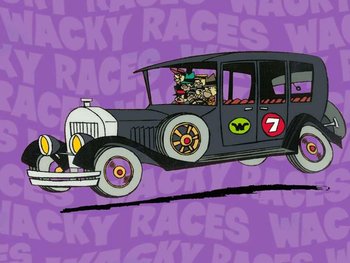 The Bulletproof Bomb
Voiced by: Paul Winchell (Clyde, 1968 cartoon), Don Messick (Ring-A-Ding, 1968 cartoon), Jim Cummings (Clyde, 2000 video game)
A group of seven pint-seized 1920's-style gangsters composing of Clyde, their leader, Ring-A-Ding, Rug Bug Benny, Mac, Danny, Kirby and Willy who race in the Bulletproof Bomb. They are constantly preoccupied with getting caught by the police and are able to use "getaway power", which involves all members, except for Clyde, extending their legs through the bottom of the car and running.
Prof. Pat Pending (Driver of the Convert-a-Car)

And there’s ingenious inventor Pat Pending in his Convert-a-Car.
The Announcer

The Convert-a-Car
Voiced by: Don Messick (1968 cartoon), Scott Innes (2000 video game)
An inventor in the Convert-a-Car. He can transform his car into pretty much anything that moves.
Advertisement:
Penelope Pitstop (Driver of the Compact Pussycat)

Oh, and here’s the lovely Penelope Pitstop, the glamour girl of the gas pedal.
The Announcer

The Compact Pussycat
Voiced by: Janet Waldo (1968 cartoon and 2000 video game), Kath Soucie (Wacky Races Forever pilot), Nicole Parker (2017)
The lone female, in a 1930s racing costume in the Compact Pussycat. A southern belle, Penelope is more concerned with her looks than with racing and often gets herself into trouble.
The Slag Brothers (Drivers of the Boldermobile)

Next we have the Boldermobile with the Slag Brothers: Rock and Gravel.
The Announcer 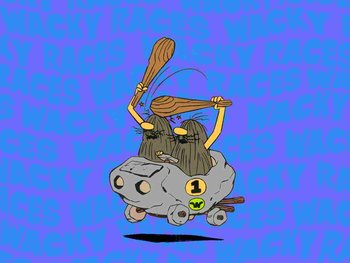 The Boldermobile
Voiced by: Daws Butler (Rock Slag, 1968 cartoon), Don Messick (Gravel Slag, 1968 cartoon), Jim Cummings (2000 video game)
Two cavemen, Rock and Gravel, who drive in the Bouldermobile. Their car is made out of rock, the brothers, who talk in caveman-like gibberish but with occasional intelligible words, power it up by hitting it with their clubs and are also able to re-build it from bare rock, always using their clubs.
The Gruesome Twosome (Drivers of the Creepy Coupe)

Lurching along is the Creepy Coupe with the Gruesome Twosome.
The Announcer

And right on their tail is the Red Max.
The Announcer

The Crimson Haybaler
Voiced by: Daws Butler (1968 cartoon), Greg Burson (2000 video game)
A Manfred von Richthofen-styled aviator who speaks with a German accent, in a car/plane hybrid called the Crimson Haybailer. His vehicle is able to fly, although for short distances.
Lazy Luke & Blubber Bear (Drivers of the Arkansas Chuggabug)

And there’s the Arkansas Chuggabug with Luke and Blubber Bear.
The Announcer 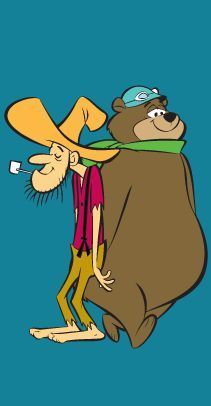 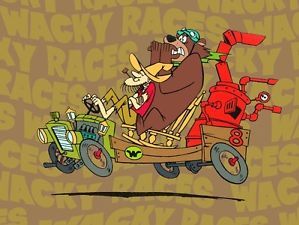 The Arkansas Chuggabug
Voiced by: John Stephenson
Lazy Luke, a hillbilly, and Blubber Bear, a fearful, timid bear, drive in the Arkansas Chugabug. Luke maneuvers the steering wheel with his feet and his car is steam-powered from an old and rickety boiler.
Advertisement:
Dick Dastardly & Muttley (Drivers of the Mean Machine)

Sneaking along last is that Mean Machine with those double-dealing do-badders, Dick Dastardly and his sidekick Muttley. And even now they’re up to some dirty trick. And they’re off! To a standing start. And why not? They’ve been chained to a post by shifty Dick Dastardly… who shifts into the wrong gear.
The Announcer 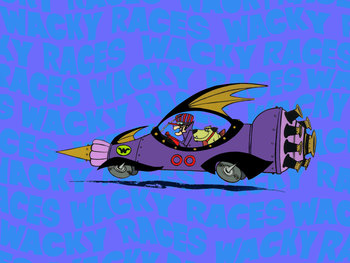 The Mean Machine
Dastardly voiced by: Paul Winchell (1968 cartoon), Jim Cummings (2000 video game, Wacky Races Forever pilot, and Wacky Races: Crash and Dash for Wii and DS), Peter Woodward (2017), Jason Isaacs (SCOOB!)
Muttley voiced by: Don Messick (1968 cartoon, SCOOB!* the laugh only), Billy West (2000 video game, Wacky Races Forever pilot, Wacky Races: Crash and Dash for Wii and DS, the 2017 version and SCOOB!)
The villains of the series, Dick Dastardly and his dog sidekick Muttley are in the Mean Machine, which is a purple, rocket-powered car with an abundance of concealed weapons and the ability to fly. Dastardly's usual race strategy revolves around using the Mean Machine's great speed to get ahead of the other racers, and then setting a trap to stop them and maintain the lead; but most of his plans backfire, causing him to fall back into last place. Dastardly (almost) never sees victory.

And away they go! On the way-out Wacky Races!