These are some of the characters from WORKING!! and tropes that are associated with them. Beware of potential spoilers. 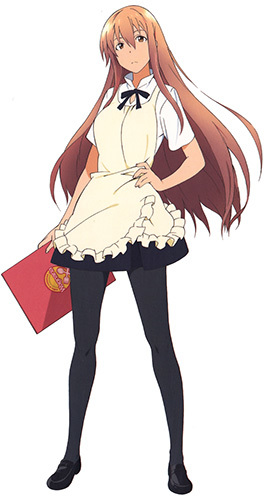 to see his crossdressed self "Kotori"
Voiced by: Kenichi Suzumura (Drama CD) and Jun Fukuyama (Anime)
The fourth (and only male) of the five Takanashi siblings, sixteen-year-old Souta never ever intended to work part-time, let alone in a family restaurant (his home life is busy enough). This all changed one winter day when he encountered a petite girl asking for part-timers on the street. Charmed into helping her out, Souta soon found himself in the middle of a workplace full of... colorful co-workers. Ironically, due to his own issues he fits right in.

Voiced by: Mai Kadowaki (Drama CD) and Kana Asumi (Anime)
Cute and extremely petite, seventeen-year-old Popura is Souta's sempai both at school and at work. Indeed, she's the main reason why he is even working at Wagnaria to begin with, having "recruited" him off the street one day. Earnest, kind to a fault and hardworking, Popura would like it better if some of her coworkers took her more seriously; unfortunately due to her cuteness and her diminutive height, this won't happen any time soon.
Mahiru Inami

Voiced by: Mai Nakahara (Drama CD) and Saki Fujita (Anime)
At first glance, Inami looks like a shy seventeen-year-old who wouldn't hurt a soul. However, as Souta found out (the hard way), Inami has extreme androphobia, and her first impulse when faced with someone of the opposite gender is to send the poor sod flying with one of her punches. Hard. Inami herself isn't happy about this, and wishes that she could talk to guys normally.
Kyouko Shirafuji

Voiced by: Junko Minagawa (Drama CD) and Kumiko Watanabe (Anime)
Ostensibly the floor manager of Wagnaria, Kyouko doesn't seem to actually do much work. Indeed she is usually seen eating either her usual parfaits (care of Yachiyo) or whatever food is in reach, much to Satou's annoyance. A delinquent in her youth, Kyouko can still call on members of her old crew whenever the restaurant is in need of extra help.
Yachiyo Todoroki

Voiced by: Shiho Kawaragi (Drama CD) and Eri Kitamura (Anime)
The daughter of a family of blacksmiths (explaining the katana she always carries around), twenty-year-old Yachiyo is the senior waitress of Wagnaria. Souta, Popura and Inami all work under her, while Yachiyo in turn reports directly to Kyouko. Responsible and hardworking, Yachiyo absolutely dotes on Kyouko ever since the latter saved her from bullies, and is always happy to prepare for her manager her favorite parfaits. Yachiyo's adoration of Kyouko annoys Satou to no end, partly because it eats through their supplies, and partly because of... other things.
Jun Satou

Voiced by: Hirofumi Nojima (Drama CD) and Daisuke Ono (Anime)
One of the two cooks usually on duty, chain-smoking twenty-year-old Satou seems mostly unaffected by the eccentricities of his coworkers. With stress on "mostly". He and Yachiyo started working at Wagnaria at the same time, and as much as he hates to admit it, he's taken a shine to his katana-wielding peer. Unfortunately for him, she only has eyes for Kyouko, though if it's of any consolation Yachiyo does see him as a close confidant.

Voiced by: Yoshinori Fujita (Drama CD) and Hiroshi Kamiya (Anime)
The other cook normally seen on duty, Souma's personal life is a mystery to his coworkers. Unfortunately, the opposite could not be said for him, who happens to be very well-versed in their backgrounds, which he often uses to his advantage. He enjoys watching the weirdness that goes on between the folk in Wagnaria, though that's not to say he doesn't mind helping to get things moving — so long as it suits him, of course.
Aoi "Yamada"

Voiced by: Kana Ueda (Drama CD) and Ryo Hirohashi (Anime)
A girl of indeterminate age Otoo brought back with him one day, Aoi has been living in the restaurant's attic ever since. She works as a day "trainee", though her contribution to the actual workload is dubious at best. Her main goal at the moment is to get Otoo to formally adopt her, something he seems to be set on delaying for as long as humanly possible.
Hyougo Otoo

Voiced by: Daiki Nakamura (Drama CD) and Joji Nakata (Anime)
Senior manager in charge of the Wagnaria branch everyone is working in, Otoo-san (as he is called by his employees) doesn't spend as much time at the restaurant as he should. This is because he spends his time looking for his wife, who wandered out of the house one day to buy milk and never returned. His search led him all over Japan, which means he always brings some treats whenever he does drop by the restaurant.
Maya Matsumoto

Voiced by: Akiko Kawase
Another waitress sharing screentime with the floor crew, eighteen-year-old Maya deliberately avoids taking part in the daily antics her coworkers keep getting involved in. A perfectly normal working girl in her mind, she wants to make sure it stays that way... which makes her come off as rather weird to the rest of the cast.

Voiced by: Mabuki Andou (Drama CD) and Ryoko Shiraishi (Anime)
The eldest of the Takanashi siblings, 31-year-old Kazue is a recently-returned divorcee taking up law to supplement her income. Despite her stern demeanor, she often worries over her younger siblings, particularly her reclusive immediate younger sister Izumi.
Izumi Takanashi

Voiced by: Fumiko Orikasa (Drama CD) and Yoko Hikasa (Anime)
The second of the Takanashi siblings, 28-year-old Izumi is a romance novelist, though often struggling to meet her deadlines due to lack of inspiration. Gloomy and extremely frail, Izumi almost completely depends on Souta to even function at home. Except for one exception, her wardrobe seems to consist mostly of black gothic-style dresses.
Kozue Takanashi

Voiced by: Akiko Kimura (Drama CD) and Shizuka Ito (Anime)
The middle child of the Takanashi siblings, 26-year-old Kozue is a women's self-defense instructor and a regular at Wagnaria... much to Souta's chagrin. Despite being very attractive, she seems to have awful luck at keeping boyfriends, which leads to her drowning her sorrows through copious amounts of alcohol.
Nazuna Takanashi

Voiced by: Rie Kugimiya (Drama CD) and Momoko Saito (Anime)
The youngest of the Takanashi siblings, twelve-year-old Nazuna seems to be happiest helping out Souta, and would do anything, up to and including manipulating her older sisters, just to help ease the pressure from him. She helps out at Wagnaria sometimes under the excuse of doing a school "project".
Shizuka Takanashi 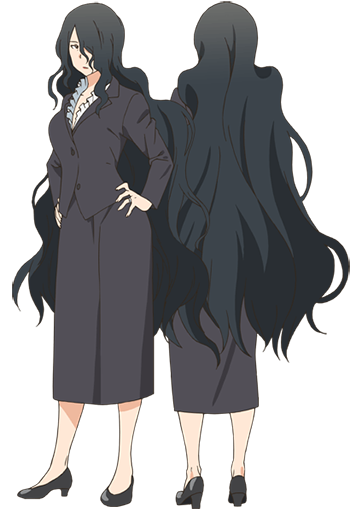 Voiced by: Ai Orikasa
The Takanashi's mother. She is often too busy working to spend much time at home, but shows up in season 3, much to their dread.

Voiced by: Yuuichi Nakamura
One of Kyouko's old henchmen from her delinquent days who started following her ever since she beat him to a bloody pulp. These days Youhei is still ready and willing to rush to fulfill whatever request she might have. In fact the main reason he hasn't started looking for work of his own was so that he could be free whenever Kyouko needs him.
Mizuki Mashiba

Voiced by: Haruka Tomatsu
Youhei's fraternal twin sister and Kyouko's other high-school henchman. Unlike Yohei, Mizuki became Kyouko's follower... because she just loved how Kyouko beat her brother to a bloody pulp. Nowadays she's a productive member of society, unlike her brother, and works as an insurance lady. This still doesn't stop her from running to Kyouko's side whenever the latter needs help.
Haruna Otoo

Voiced by: Junko Iwao
Otoo's long-lost wife, who he spends an inordinately large amount of time trying to find. Ironically she has been spotted recently close to the Wagnaria branch he works in.
Ritsuko Kitahara 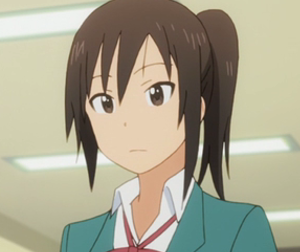 Voiced by: Fumie Mizusawa
A friend and classmate of Mahiru, "Ricchan" worries about Mahiru's many personal issues. That said, she's not too bothered about putting Mahiru's androphobia to practical use.
Momoka Suzutani 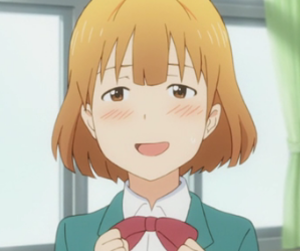 Voiced by: Sayuri Yahagi
Another of Mahiru's friends at school, Momoka also worries about her friend's problems. However unlike Ritsuko, Momoka is perfectly content to leave things as they are... since it's more fun that way.
Kirio "Yamada"

Voiced by: Satoshi Hino
A young man looking for his sister (two guesses who), Kirio's initial methodology in looking for her made everyone think that he was a molester, though an encounter with Inami cleared up that misunderstanding. A member of his school's karate club, Kirio is one of the few males capable of stopping Inami's concrete-destroying punches.
Toru Minegishi

Voiced by: Kikuko Inoue
The mother of Aoi and Kirio and also the executive assistant to Shizuka Takanashi. She is almost always quiet, due to her constant overthinking.