A Character Sheet for the Cyber Troopers Virtual-ON series has been made considering the characterizations involved. 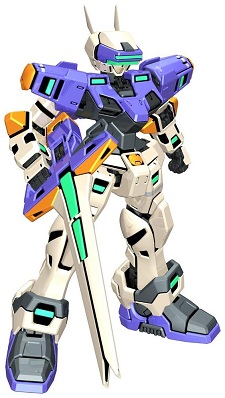 The Temjin series is one of the most iconic Virtuaroids of the Virtual-ON series and also a fan-favorite among beginners and expert players alike. Temjin is an all-rounded VR equipped with a Multi-Purpose Beam Launcher (or M.P.B.L. for short) and grenades, which make it effective in long- and close-range combat. 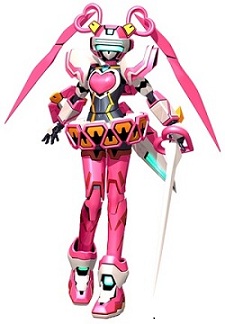 Another fan-favorite in the Virtual-ON series. The Fei-Yen series are agile Virtuaroids though they often have weak armor. They also possess a unique ability in invoke their Hyper Mode to gain a boost of speed and power in dire situations (or in some cases, activated manually at the expense of her life).

The Dorkas series are small, but resilient and odd-looking mechs. Their weapon of choice is a gigantic spiked mace where their right hand should be. It is also equipped with flamethrowers. By the time of Oratorio Tangram, the series has been discontinued and succeeded by the Dordray series. 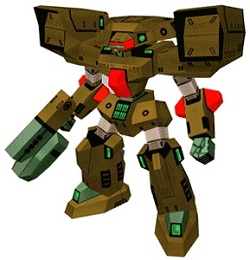 The Belgdor series are another all-around series of mechs. They utilize explosives over typical beam weapons, which increases their damage output. 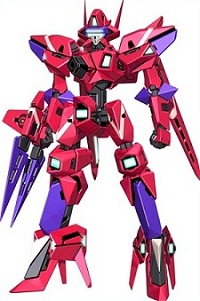 The Viper II series are perhaps the fastest of all mechs in the series, but pay the price with extremely poor defense. They also have the ability to transform into a jet fighter, but this is a very risky maneuver, as some people have reported their comrades losing control and dying horribly when this mode is activated. 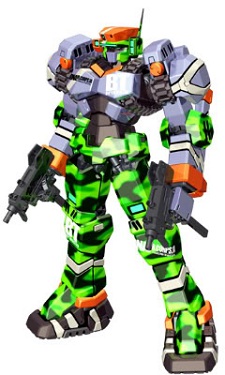 The Apharmd series is mainly suited for mid-to-close-range combat. They are equipped with specially modified tonfas, called "tongfers", to inflict massive damage against enemies, as well as sub-machine guns. Eventually, the series was divided into three variants: the Battler (later Jaguar series), Striker (later Tiger series), and Commando. The Battler is more suited for close quarters, acting as an upgrade to the original Apharmd. The Striker, however, is better suited for mid-to-long range, equipped with cannons instead of machine guns. The Commando variant acts as a balance between the two, replacing the tongfers with a plasma machete and a shotgun. 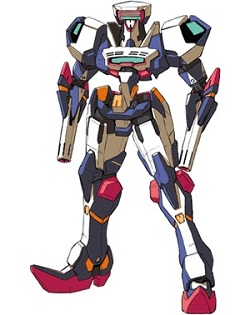 The BAL series are easily the hardest mechs to control in the series. Able to change their shape depending on the environment, they utilize a complex drone system that involves detaching their limbs. These drones can utilize a wide variety of attacks, from homing shots to even trapping enemies in a laser cage that electrocutes them. 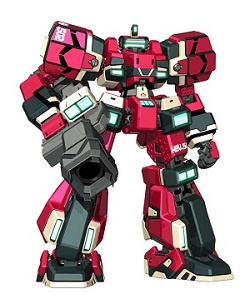 Raidens are the slowest of all mechs but exhibit the most devastating beam weapons of all - plasma cannons hidden within their shoulders that fire HUGE laser blasts to decimate foes. These cannons are taken directly from those of super battle cruisers, which led to only 26 Raidens being made. Later models use a weaker, emulated variant due to the immense costs of porting the cruisers' cannons over to the Raidens. Some can even completely shed their armor to gain immense speed. 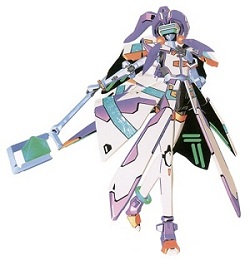 The successor to the Fei-Yen model, designed in the form of a traditional sorceress as opposed to the standard magical girl. Angelans utilize a special power source which allows them to generate ice. 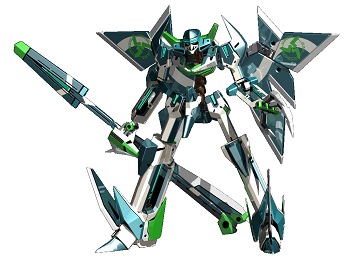 What happens when science decides to take the bond between pilot and mecha literally, and everything goes horribly, horribly wrong. Specineffs are powered by a device known as the EVL Binder, which is directly powered by the pilot's negative emotions. Many who have piloted a Specineff have been reported as being completely changed from the experience, and most certainly NOT for the better. Horror stories aside, the Specineff is skeletal in design, evoking the image of The Grim Reaper. Its main weapon is a gigantic beam scythe. By far its most infamous function, however, is "Death Mode". Upon activation, Specineff becomes an unstoppable juggernaut for 13 seconds in real time, but fail to defeat your opponent within the time limit? Well...you'll be paying a steep price. 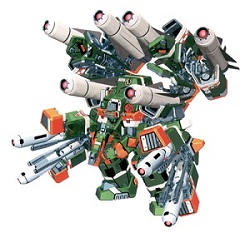 The successor to the Belgdor model. The Vok series continue the tradition of utilizing explosives in their arsenal. The Stein-Vok, introduced in 5.66, is armed with a tactical nuke.

Appearance: Oratorio Tangram, FORCE (under the VOX series), and MARZ (same as FORCE)

The successor to the Dorkas. Dordray is much larger than its predecessor, and no longer has a lower frame that resembles a vacuum cleaner. Now with legs, it has the special ability to increase its size to titanic proportions...somehow. 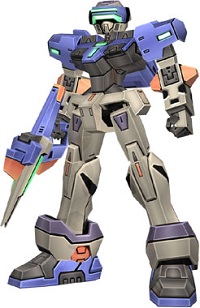 A Virtuaroid introduced in Ver. 5.66 of Oratorio Tangram, he serves as a throwback to the original Temjin of Operation Moongate (MBV-04 G TEMJIN to be precise). Likewise, it doesn't have all the new features of the later Temjin series, and he is also weaker. To compensate for the lack of overall strength, 10/80 Special has spread shots and he can use some turbo attacks at a lesser expense than Temjin. 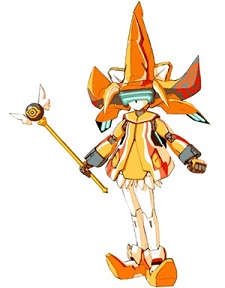 Another Magical Girl mecha from the same designer of Fei-Yen and Angelan. Like Angelan, this one was designed to capture a certain anomaly. However, contact with the anomaly resulted in a horrible mutation in which the pilot was crushed to death as the mech transformed and its functions were completely assimilated by the anomaly. 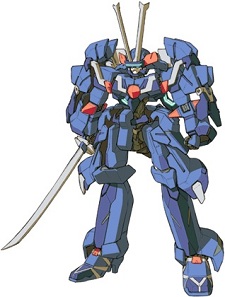 From the Mad Scientist behind Specineff comes this new monstrosity. Kagekiyo is, quite literally, the warrior himself reborn. Some say his very soul was plucked from the afterlife and subdued under immense torture and conditioning in order to be implanted directly into the mech. Some pilots tell tales of their Kagekiyo mechs exhibiting similar symptoms as Specineff, going berserk as if it had a mind of its own. 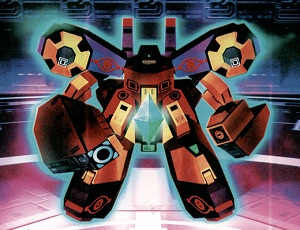 A glitch in the M.S.B.S. system that manifests as a punishment for winning matches via timeout one too many times. It is said that a child's mind had become trapped within the system, and as such reports of its existence vary wildly. Some have reported it as gigantic, dwarfing even Raidens, while others have reported it as comically tiny. Even the color of the mech itself varies. Eventually, a mech called Guarayakha was made to investigate and capture the anomaly. However, the mission ended in failure when the anomaly forcibly took over the mech, crushing and killing the pilot within as it mutated the Guarayakha to match its iconic, gigantic form. What was once something akin to a harmless computer virus has now become a living nightmare, crossing over into the real world.

The guardian of the Moon Gate, and the Final Boss of the first game.

In MARZ they are often used multiple times, including ones used to get rid of potential intruders. 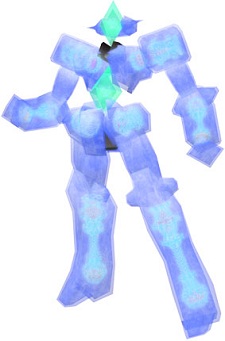 A mysterious mech that appears to be a living V-Crystal. No one knows exactly what it is or why it has appeared. Some even question whether it is even a mech at all, instead being something completely alien. Taking Jaguarandi's place as the penalty boss, Ajim appears before players who consistently win by timing the opponent out in order to punish them. Ajim has immensely powerful weaponry, and utilizes a special upgrade system to make aspects of itself stronger. Perhaps the most advanced mech to use in the series, not only because it is so blisteringly fast, faster than even a Raiden without its armor, but also because its health constantly drains due to being outside of its native environment.

A strange mech that appears to layer two Z-Gradts on top of one another to create a single machine. 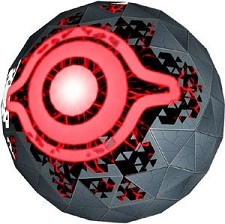 A seemingly-omniscient, alien supercomputer which has the devastating capability to distort the fabric of reality itself. As a result, many view it as the ultimate weapon, akin to wielding the power of a god, and an arms race has begun between organizations to claim it as their own. Unbeknownst to all, Tangram is a sentient, female-voicing data being capable of human thought and communication, its intentions not harmful to anyone. She serves as the titular Final Boss of both Oratorio Tangram and MARZ.

Appearance: MARZ
Voiced by: Norio Wakamoto
The DAIMON are an ancient alien race that was responsible for the construction of the Moongate and manipulated the V-Crystals to their will. They went dormant within Meta-Cyber Space until they were re-awakened by the Limited Wars. They seek to destroy humanity and manipulate the corporations to side with them.
Side-story characters

The Belmate is an improved Belgdor. It is a slightly larger VR painted gray rather than the traditional green. The Belmate was equipped with a much better radar system than the Belgdor, and was used briefly in Operation Sand Sycthe until its successor, the GRYS-VOK, was developed.

The RVR-64 "i-Dorkas", a variation of the Dorkas, was created for use in construction. It has no weapons and has a shovel claw installed on its left arm.
Humans and Organizations

Voiced by: Yukana
The head developer of LLN series, which are most of the Fem Bots. She got kicked out from DN Corp. sometime before the events of Operation Moongate, after the Prototype Fei-Yen ran away. Since Oratorio Tangram, Lilin has operated as freelance VR developer, selling them to both factions.