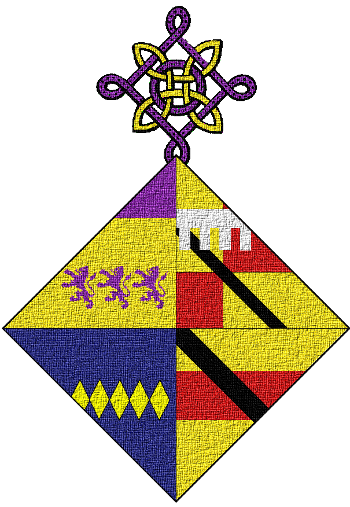 Arms of Professor the Baroness Lacy.

And Featurting.... Other notable personages in the Village Tales series. The main character sheet is here.

A lady, a scholar, a female don, warm, wise, witty, well-bred, and a damned handsome woman – and not only for her age, which you wouldn't guess.

In-Universe, everyone – save, perhaps, the Duke – is eager to see her become Duchess of Taunton.

As matters stand, she's busy leading the multidisciplinary teams of historians, prehistorians, archaeologists, and so on who are surveying the hell out of the Woolfonts. And doing so brilliantly.

Lacy, Professor Millicent Helen Emmeline DBE FRS FSA FRSE FRHistS FBA FAcSS, The Baroness Lacy
Professorial Fellow, S Chad’s, Dunelm, Quondam Fellow of All Souls in the University of Oxford
b Merryhill House, Mansel Lacy, Herefs, 20 August 1966, dau of the Rev’d Hugh Walter Alan Lacy DD & Helen Joan Margaret (née Childe), dau of Sir [Miles Henry Alan] Bullough Childe Bt MFH & Althaea [Maud Anne], Lady Childe, dau of Henry John Fitzroy Scudamore Esq. & Margery Anne Honoria (née Burke Roche)
Education
Malvern Girls’; BA (Oxon) MA (Oxon) MPhil (Dunelm) DPhil (Cantab)
Siblings
yr br, Sqn Ldr Walter Fitzroy Childe Lacy RAF (No. 617 Sqn) DFC & Bar, 1973 – 2007
Career
Academic
Organisations
The WI; the RHS; the RSPB; the Council for British Archaeology; the Wainwright Society; SPAB; the Georgian Group; the Royal Society; the Society of Antiquaries; the Royal Society of Edinburgh; the Royal Historical Society; the British Academy; the Academy of Social Sciences; the British Society for Population Studies; The Economic History Society; The Regional Studies Association; the Hadrianic Society; the Anglo-Norman Text Society; the Cumberland and Westmorland Antiquarian and Archaeological Society; the Historic Society of Lancashire and Cheshire; the Clifton Antiquarian Club; the Chetham Society; the Lancashire Parish Register Society; the Thoroton Society of Nottinghamshire; the Surtees Society; the Oxfordshire Architectural and Historical Society; the Oxford University Archaeological Society; the Lancashire and Cheshire Antiquarian Society; the Stubbs Society; the Early English Text Society; the Ancient Monuments Society; the Society for the Promotion of Roman Studies (The Roman Society); the Society for Name Studies in Britain and Ireland; the British Association for Local History; the Historical Association; the Royal Society of Antiquaries of Ireland
Recreations
Gardening & horticulture; Rambling (‘as my students should attest’); Birding & twitching; Preservation; Historical cookery
Address
c/o S Chad’s College, Dunelm
– Black's
Lecturing: "'I am not arguing the issue of Free Will: we've a Faculty of Philosophy for that: –' she paused for the inevitable laughter – 'I am rather noting that every choice one makes or has made, forecloses, necessarily, some options and opens others for the next round of choosing.
"'If you know Who and Where and When, you know, Why; and, How. The decisions of the past, the history of prior choices, shape and limit the present and the character and options of those living in their present.
"'History, simply, is mass biography, the cumulative biography of the great and the humble alike, and their choices, most of these made in an absence of mind whilst thinking more about dinner or washing or, as one reels home from the local, what sort of rocket one's going to get from one's spouse."
Professor Dennis Farnaby DPhil, Student of Christ Church, Fellow of All Souls, Tauntonian Professor of Ancient British History and Antiquities

Youngish Fellow at Oxford. Very clever, superficially stuffy despite his age, a bit of a dark horse, and with a strong interest in horse cults and sacred landscapes.

Gruff, Scots ex-Army (RMP) officer, elected as the County Police & Crime Commissioner: a much-tried man. Wiltshire seems to house half the peerage and an extraordinary number of Scots clan chiefs; Lachlan can manage that … or could, if one of those peers weren't the Duke of Taunton.

"Charles was an excitable wee man, Lachlan sometimes felt, but he had a knack of becoming overexcited, and positively exercised, only over matters, small in themselves but heavy with portent, which did want to be nipped in the proverbial bud – and had also a knack of seeing them first. He was a damned nuisance; but an indispensable one."

Equally much-tried Chief Constable, who dreads hearing that anything at all has happened in the Woolfonts – because absolutely anything might.

"The duke was trying to persuade Lachlan and Tommy that, so long as there was some limit on the day's bag, journos ought to be subjects of lawful shooting on the wing. The PCC and the Chief Constable persuaded themselves that Charles wasn't, actually, wholly serious – although it was a near-run thing."

Detective Inspector whose sanity chain, as he admits to Fr. Bohun, is skiving off church to work in his garden. (Fr. Bohun carefully doesn't tell him that young Oliver Brockway is beginning to think about a Church career....) A family man, brainy yet practical, educated but still attuned to the rural mindset of those he protects (and those he investigates), and more than wise enough to know that Fr. Bohun, in the Downlands, is one of those people who can influence matters before they become officially his – and police – business.

"DI Martin Brockway could attest wearily to that latter fact, the limited overlap between 'human' and 'decent'; and could attest, too, that it wasn't all on one side."

"… PC Bull – just finding her feet at Tisbury NPT and already realising she'd been given, for her sins of newness and knowing no better, a truly shit task by her friendly colleagues...."

The retired Gurkhas and their families who were the ducal solution to running up social housing in a heritage area. And the excuse for creating STETHEL as a Trust to retrain wounded and demobbed squadettes and squaddies. Notably includes young Captain Rai ("QGOO, MVO with it, and, most pertinently, CGC"), liaison (still serving); and community leaders Hon. Captain Thapa, retired QGO (late QGS) and Hon. Lt. Gurung ("who had been, in his youth, a Rifleman of the 7th (Duke of Edinburgh's Own), and had fought like a tiger at Mount William in the Falklands").

Of Captain Rai: "The small, trim, quick young man, who even in mufti wore the military virtues like a uniform and could never have been mistaken for anything other than what and who he was, grinned broadly: so much so as to send up a few stereotypes. He was the sort of chap who, naturally and by training alike, moved even more quickly than the absent duke. Everything about him – even in mufti – seemed to be silver, jet, KD, and … steel."
At Oxford

Dons, mostly. And two mixed-type Americans. The Warden of All Souls, the Dean of Christ Church, the Provost of Oriel, a Junior Proctor, an American Marshall Scholar, and an American Rhodes (Must Fall) Scholar. And Poppy van Meteren and India Charlton, the world's most cynically world-weary undergraduates.

Lady Lacy, on a rail journey: "… the increasingly obscured landscape in the thickening light, the landscape of Shakespeare giving way with dignity to that of Oxfordshire. On now to Banbury and to Oxford, dear, beloved, Oxford itself."

George Mould, "Semi-official poacher-in-ordinary by appointment to our district," "braconnier-en-titre"

Awful old sleeps-in-his-boots bugger, tolerated by the Duke mostly for the amusement value. Besides, it gives Sanger, his keeper, something to do.

The Duke (of course): "'See that bugger slipping over a stile? George Mould. Semi-official poacher-in-ordinary by appointment to our district: he's well out of his catchment area here. Up to no good, I make certain; but, there, his old mother was a Musselwhite, so what can one expect? I'll mention it to the plods, although that's just the sort of public-spiritedness as redounds upon one: if they chivvy him back homewards it'll be my pheasants at risk, damn it all. Even so, one must keep up the appearances, I suppose.'"