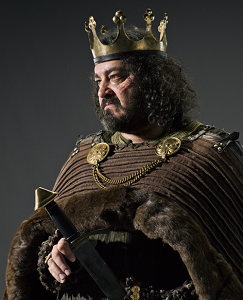 Played By: Ivan Kaye
"Who are these barbarians, these savages? Why have they come to torment us?!"

The king of Northumbria. Boisterous and warlike by nature, Aelle is nonetheless unprepared for the fury of the Northern raiders and finds himself outplayed and outfoxed at every turn by Ragnar Lothbrok. His own brother slain at Ragnar's hand and his armies broken on the Northman's blades, Aelle swears unremitting vengeance upon the Viking. 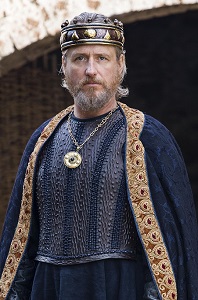 Claiming descent from one of the leaders of the Anglo-Saxon invasion, the King of Wessex is widely reputed to be a formidable man. Having learned the ways of politics at the court of Charlemagne, and the ways of warfare during his conflicts with the other kingdoms, Ecbert will need all of his strategic skill to deal with the new threat of the Norsemen.

King Ecbert’s son and heir to the throne of Wessex.

The daughter of King Aelle and wife of Prince Aethelwulf.

The son of Athelstan and Princess Judith, he is destined to become the legendary Alfred the Great.

The warrior bishop of Sherborne.

The bishop of Wessex, completely subservient to king Ecbert.

The daughter of the late King Offa of Mercia, she murdered his heir, her brother, and is embroiled in a civil war for control of the Kingdom of Mercia.

Princess Kwenthrith’s younger brother, one of the leaders in the Mercian civil war.

Prince Wigstan of Mercia
Played By: Declan Conlon
"If you ever supposed that Kwenthrith could play a calming, stabilizing role in this madhouse we call Mercia, then you are as mad the rest of them."

One of the last surviving members of the Mercian royal family. Known first as "W".