open/close all folders
House of Muspellzheimr 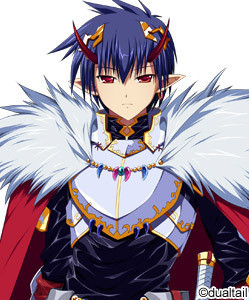 The Youngest Brother Who Seeks the Throne
"I will become the ruler of the demon realm. To that end, I'm willing to destroy every obstacle in my path!"

The head of the Muspellzheimr family and Villain Protagonist of Frontier. Originally the most eligible heir to the throne, his family lost nearly everything after his father was framed for treason and his mother taken away. For the past few centuries, he has put up a facade of a weakling, only to be plotting behind everyone's backs. Once the Dark Lord announced the challenge for the throne, he wages an all-or-nothing gamble in a war against nearly impossible odds. He would stop at nothing to achieve his dream, even if it means he has to deceive everyone and corrupt the five goddesses to do his bidding.

His Dark Gear is Ardvana, a spear that emits flames any time it absorbs mana. Although it has its magic core removed, being far less powerful than its original form, it is the main tool for corrupting the goddesses. 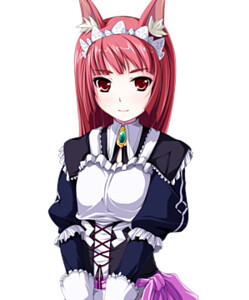 The Devoted Maid
"I am Master Loki's maid, Fena. If you have business with him, please do let me know."

A talented maid who serves Loki. She is also like a mentor to Loki, and teaches him studies, etiquette, as well as basic magic and general education. Because she has been by his side for many years, she complains and chastises him a lot, and the amount of sighing she does only increases by the day. However, that is only because she loves him dearly. 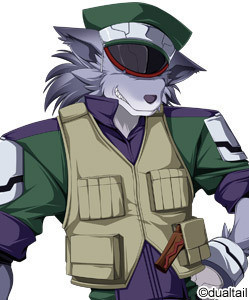 The Poisonous Wolf Sniper
I am but a soldier, Captain. As long as you give the order, I'm willing to lay my life on the line anytime. So, what are your orders, sir?

A male Lupold (a.k.a. werewolf) who served Loki’s father for generations in his military unit, Equity’s Edge. While sometimes simple-minded, he has absolute loyalty to the current head of the Muspellzheimr house. Garm is a master marksman is proficient in creating Wolfsbane arrows, which carry a powerful poison in them. 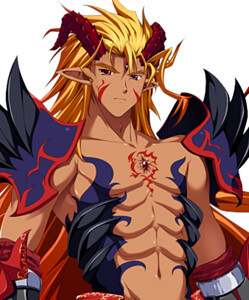 God of Armageddon
"Heh, who cares about the difficult stuff and minor details! Let's just enjoy this fight!"

By causing a rapid stream within Loki's royal blood, the slumbering God of Armageddon will awaken and manifest in the world of the living. Despite sharing the same body, his strength and personality are that of a completely different being. 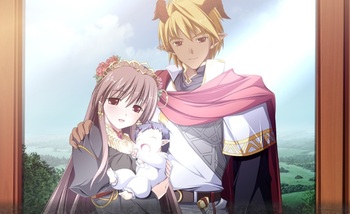 Farba, Sinmara, and baby Loki
"With the time I have left...Until the very moment soul burns away...!"

Loki's father. Even among all of Surt's children, Farba, alongside his older sister Disir, was considered a Hero within the Demon Realm. However, one day, he was suddenly branded a rebel and executed by the Dark Lord.

"Loki, take this key...One day, it will surely show you the path forward."

Loki's mother. She has been imprisoned for over a century (or so everyone claims) and Loki's entire gambit was a step towards his ultimate goal of freeing her. 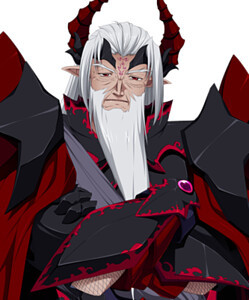 Infernal Emperor
"I loathe stagnation. A world filled with blood and cheers is the only way the world should ever be. To you, my heirs, who wish to become the next Dark Lord...I shall have you be the directors of this grand play."
The current Dark Lord of the Utgardian Empire. Because of his age, he rarely makes any public appearances. Loki despises him with all of his heart as the one who stole his family's prestige. He eventually announces the challenge for the throne, putting the surviving heirs at odds with each other. 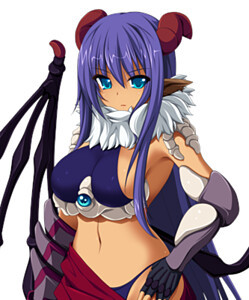 Storm Princess
"Do your best to cling to life, as my tempest spear will blow away your very soul!"

The oldest granddaughter of Surt and daughter of Disir. She has the same amount of influence and power as Ymir but lacks his soul. When Loki's house lost its standing, she would mock him through negligence, acting as if he never existed.

Her Dark Gear is Gleaming Disaster Blikjandabol, a scythe that can manipulate water particles. 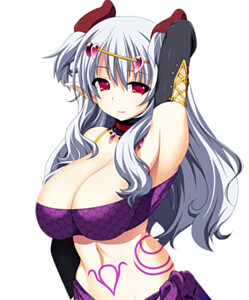 Fenrir of the Blizzard
"Oh, my dear Loki, you seem to be doing something really fun! Why don't you let your sister join in on the fun?"
The middle of Surt's granddaughters. A pleasure seeker and the laziest of all the siblings. She favors provocative clothing that entices men.
Her Dark Gear is Thavti, a whip that manipulates ice. 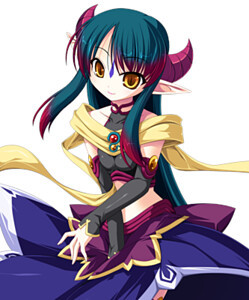 The Punishing Snake Princess
"Kyahahaha! Hey, do you like pain?"

A crude and violent girl who laughs a lot and gets angry just as often. She is, in fact, the youngest daughter among the royal siblings and an heir to the throne of Utgard.

Her Dark Gear is Bifrost, a claw that allow her to control pain from the wounds she inflicts. 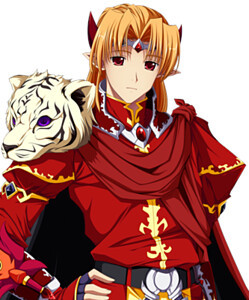 The Crimson Prince
"A fervent approach to battle is the key to any battle. So be sure to keep that in mind at all times."

The oldest of the royal candidates and Loki's cousin. When the Muspellzheimr house lost its standing, he was the only person who protected Loki, allowing him to play weakling inside the castle. Unlike the other candidates, he has empathy for the victims of Utgard's ideologies, giving him the most political and military power out of all the candidates.
Throughout the game, he sneaks into the Sinmara to provide Loki useful information for his conquest of Yggdrasil. However, he never hides the fact that he's only using Loki to make things easier for him and the other candidates to take over Ygdrassil.
Because of his ability to control fire through his Dark Gear, Ginnungap, he's known as the "Crimson Prince." 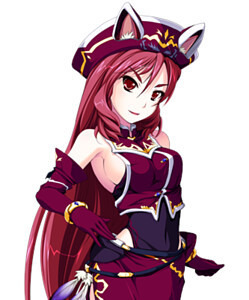 The Demon Emperor's Secretary
"I am His Majesty's shield. Know that as long as I stand, no blade shall ever reach his majesty."

The Dark Lord's secretary. She has an estranged relationship with her sister Fena, who serves Loki as his maid. 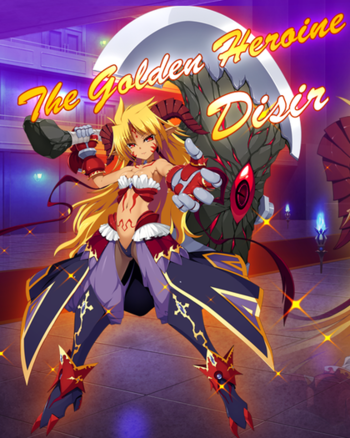 The Golden Heroine
"Don't you go relying on a dead woman, boy. Looks like I'm going to have to fix that attitude of yours!"

Once the Princess of the Utgardian Empire, she is the daughter of Surt and Farba’s older sister. She is also the mother of Hel, Fenrir and Jorm. In her prime, she was considered to be the heir who would succeed the throne of Utgard, and she was an unparalleled warrior with uncontested might. Due to reasons known only to herself, she challenged Surt, who at the time was considered the strongest in all of the Demon Realm, to a fight, and died in a blaze of glory. 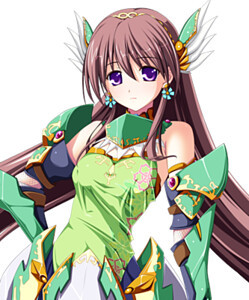 The Spring Valkyrie
"I am Tyrca, the Guardian Deity of Spring! I swear on this blade that I will defeat you!"

The Goddess of Spring and ruler of Edda, the eastern kingdom that focuses on trade. She is the first goddess Loki encounters, who bears a similar resemblance to his mother. After a quick clash during Loki's invasion of the continent, he convinces her to let them establish a business in her country. However, she fails to realize his true intentions and ends up paving the way for Loki's conquest of the continent.
Tyrca's Divine Gear is Nibelung, a sword that calls the spirits of the dead who fell on the ground it stabs. 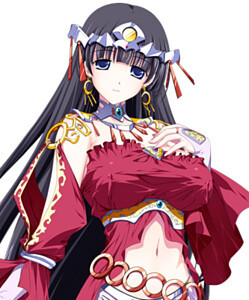 Goddess of the Harvest Moon
"I bid you welcome, Prince of the Demon Realm. Since you took the time to visit, how about a cup of tea?"

The Goddess of the Autumn and ruler of Folk, the western kingdom that focuses on agriculture. She is the only one of the four Season Goddesses married to another human, now living as a widow. She has a strong trust in humans despite knowing the good and evil side of them. 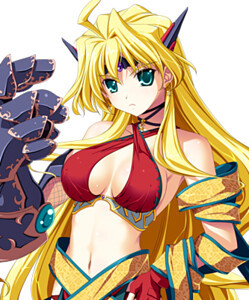 Thunderous God of the Sky
"My name is Thor! The God of Thunder, Thor! Your luck has run out now that I'm here, and none of you are getting away!"

The Goddess of Summer and ruler of Thrudheim, the southern kingdom that focuses on military and mining. She is the first to go into battle and inspires the troops within her presence. Her army is composed of both men and women, valuing strength and power above all else.
Her Divine Gear is Mjolnir, a large ax that can destroy anything in its path. 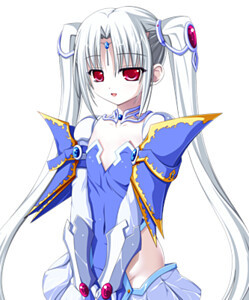 Guardian Deity of Ice
"I-I'm the goddess of this land, Rigret! If you resist, then in the name of the Guardian Deity, I won't forgive you!"

The Goddess of Winter and the ruler of Glads, the northern kingdom with sub-zero temperatures that focuses on crafts. Easily the youngest of the Season Goddesses, she is very dependent on her siblings.

Her Divine Gear is Gjallarhorn, a shield that can buff allies and curse enemies. The Divine Gear’s range and effectiveness amplify through sound waves. 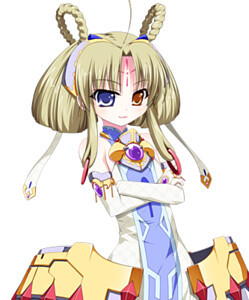 Absolute God in the Sky
"Ahaha! Good, I shall allow it! It has been a while since I have last seen a fool as reckless as you. I am the Chief God, Odin! Now, bear witness to my power!"

The Chief God who rules all over Yggdrasil. Once a mighty goddess during the Ragnarok war, only a fraction of her power remains after expending most of it to create the floating continent. She has a sense of superiority over humans and demons alike with power equaled only by the Dark Lord. However, she only intervenes in serious emergencies and solves all problems with overwhelming force.
Her Divine Gear in Gungnir, four separate swords that can combine into a single double-edged lance that annihilates all enemies without harming the terrain.