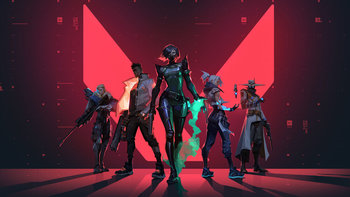 From left to right: Sova, Phoenix, Viper, Jett, and Cypher

The agents of Valorant each have their own set of abilities, but complete their loadouts with a vast array of guns. Agents have 2 basic abilities that are purchased before a round starts, a signature ability that has a cooldown in between uses, and an ultimate ability that charges with points gained from getting kills or collecting orbs on the map. The agents are split into four classes: 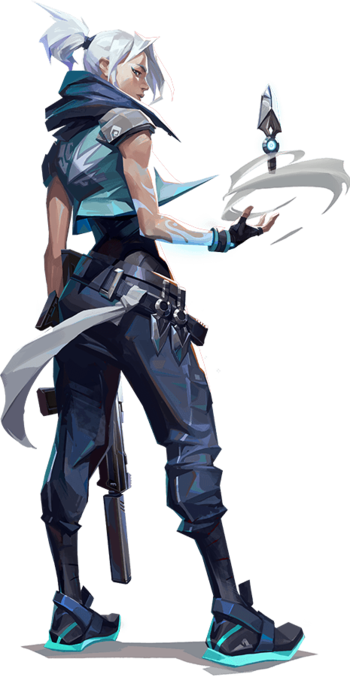 "Watch this!"
"Think you can keep up? Who am I kidding? You know you can't keep up."
Voiced by: Shannon Williams
Representing her home country of South Korea, Jett's agile and evasive fighting style lets her take risks no one else can. She runs circles around every skirmish, cutting enemies before they even know what hit them.

Her basic abilities include Cloudburst, a smoke cloud that she can curve while it's airborne, and Updraft, a swift upward dash. Her signature ability is Tailwind, a quick horizontal dash in whatever direction she's facing or moving. Her ultimate ability is Blade Storm, in which she pulls out five accurate throwing knives that recharge on kill. As her passive ability, she can fall slower in midair by holding the jump key. 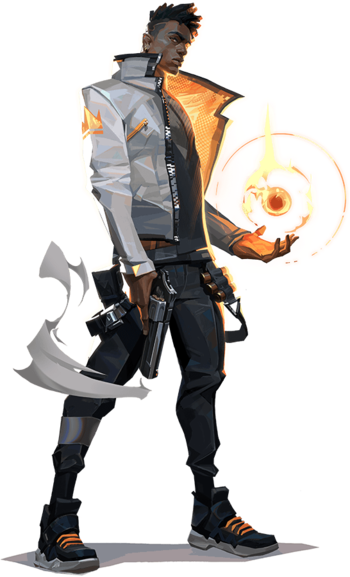 "Come on, let's go!"
"You already know the name."
Voiced by: Afolabi Alli
Hailing from the U.K., Phoenix's star power shines through in his fighting style, igniting the battlefield with flash and flare. Whether he's got backup or not, he'll rush into a fight on his own terms.

His basic abilities include Blaze, a wall of fire that blocks enemy vision and damages enemies, and Curveball, a flashbang that is thrown in a horizontal curve. His signature ability is Hot Hands, a fireball that creates a field of fire that damages enemies and heals Phoenix. His ultimate ability is Run it Back, where Phoenix marks a spot on the map. When he dies, or when the timer runs out, he returns to that spot, fully healed. 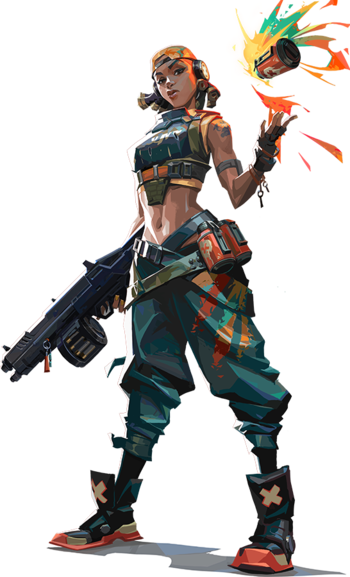 Here comes the fireworks!
"Okay mia familia, leave the fireworks to me!"
Voiced by: Carolina Ravassa
Raze explodes out of Brazil with her big personality and big guns. With her blunt-force-trauma playstyle, she excels at flushing entrenched enemies and clearing tight spaces with a generous dose of “boom.”

Her basic abilities include Boom Bot, a drone that seeks out enemies and explodes, and Blast Pack, a remote-detonated explosive pack that knocks enemies and Raze herself back. Raze takes no damage from her own packs. Her signature ability is Paint Shells, a cluster grenade that explodes, then releases three smaller, weaker grenades. Her ultimate ability is Showstopper, a rocket launcher that deals massive explosive damage. 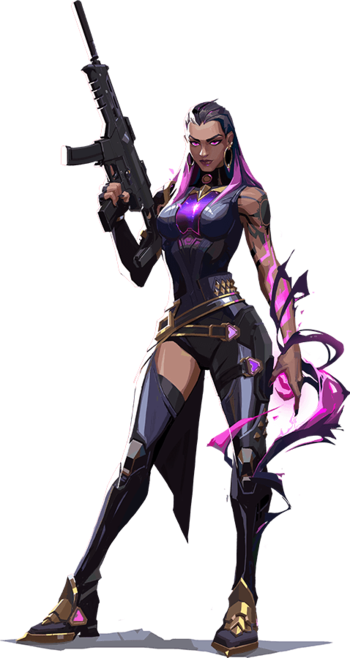 "They will cower!"
"What hope do these creaturas have? I almost pity them."
Voiced by: N/A
Forged in the heart of Mexico, Reyna dominates single combat, popping off with each kill she scores. Her capability is only limited by her raw skill, making her highly dependent on performance.

Whenever Reyna kills an enemy, they drop a soul orb. Her basic abilities are Devour, consuming a soul orb to heal rapidly over a short amount of time, and Dismiss which allows her to instantly consume a soul orb nearby and become intangible. Her signature ability is Leer, which equips a destructible supernatural eye that can be deployed to give enemies nearsight. Her ultimate ability is Empress, which sends Reyna into a frenzy that increases her firing speed, equip and reload speed dramatically. During Empress, Devour instantly activates on kill, Dismiss turns Reyna invisible and has infinite uses, and enemies are highlighted in red. The duration of Empress resets on kills. 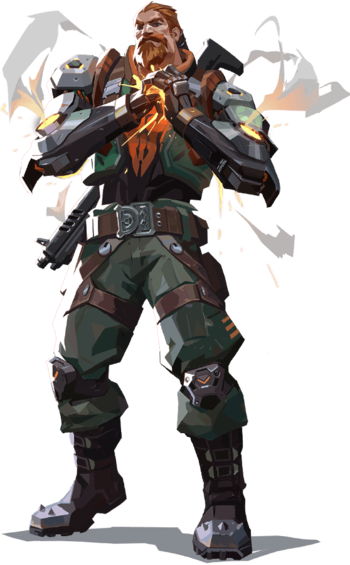 "LET'S GO!"
"These cowards aren't ready for me. No one ever is."
Voiced by: David Menkin
Breach, the bionic Swede, fires powerful, targeted kinetic blasts to aggressively clear a path through enemy ground. The damage and disruption he inflicts ensures no fight is ever fair.

His basic abilities include Aftershock, an explosive blast that pierces through walls, and Flashpoint, a flashbang that pierces through walls. His signature ability is Fault Line, a seismic shockwave that dazes enemies, slowing both movement and fire rate. His ultimate ability is Rolling Thunder, a massive quake that dazes and knocks enemies up in a large area of effect. 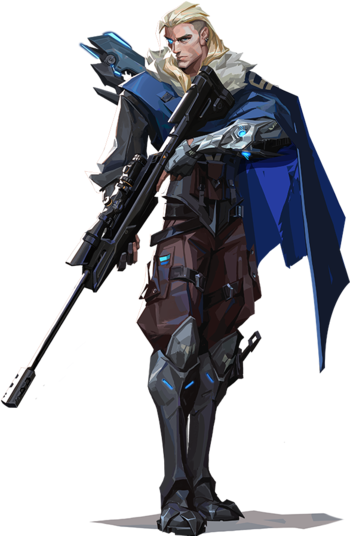 "I am the hunter!"
"This bow has taken men and beast alike. I have found there is little difference."
Voiced by: Aaron Vodovoz
Born from the eternal winter of Russia's tundra, Sova tracks, finds and eliminates enemies with ruthless efficiency and precision. His custom bow and incredible scouting abilities ensure that even if you run, you cannot hide.

His basic abilities include Owl Drone, a flying drone that can fire tracking darts at enemies, and Shock Bolt, an electric arrow that sticks to surfaces and explodes. His signature ability is Recon Bolt, an arrow that releases radar pulses to reveal enemies around it. Both his Shock and Recon bolt can bounce off walls up to two times. His ultimate is Hunter's Fury, which lets him fire 3 high-damage energy arrows that pierce through terrain and players alike. 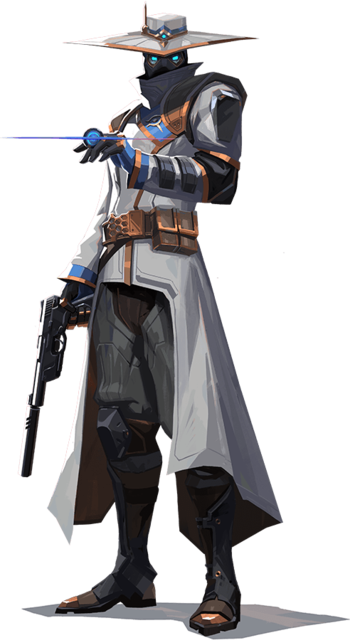 "Where is everyone hiding?"
"Nobody escapes me. But they'll try."
Voiced by: Nabil Elouahabi
The Moroccan information broker, Cypher is a one-man surveillance network who can keep tabs on the enemy's every move. No secret is safe. No maneuver goes unseen. Cypher is always watching.

His basic abilities are Trapwire, deploying up to two tripwires that tether, reveal and daze enemies, and Cyber Cage, which has Cypher toss a device that constructs a zone that blocks the enemy's vision and slows them down. His signature ability is Spy Cam, employing a camera that lets Cypher observe the area and shoot a marking dart to reveal the location of any player. His ultimate ability is Neural Theft, which allows Cypher to use a device in his hat on an opponent's corpse to reveal the location of all other living enemy players.

"Your duty is not over!"
"I wasn't strong enough before. But now? Now I am strong enough for us all!"
Voiced by: Naomi Yang
The stronghold of China, Sage creates safety for herself and her team wherever she goes. Able to revive fallen friends and stave off aggressive pushes, she provides a calm center to a hellish fight.

Her basic abilities are Barrier Orb, which equips an orb that erects a solid wall, and Slow Orb, an orb that is thrown on the ground and will slow down all enemy players walking over it. Her signature ability is Healing Orb, a heal orb that heals a single ally over time and provides selfheal if Sage uses alt-fire while damaged. Her ultimate ability is Resurrection, which allows Sage to bring one ally back to life with full health. 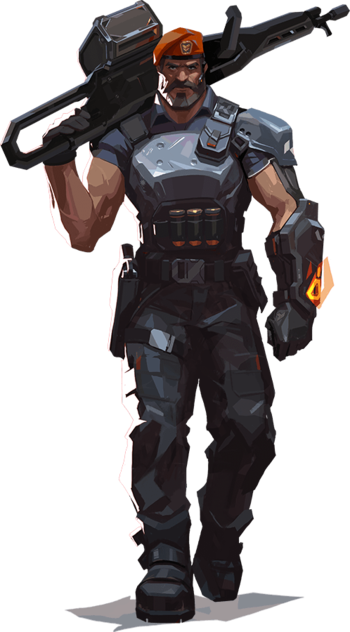 "Open up the sky!"
"They can throw the whole playbook at us. I've seen it all before."
Voiced by: Steve Blum
Joining from the USA, Brimstone's orbital arsenal ensures his squad always has the advantage. His ability to deliver utility precisely and from a distance make him an unmatched boots-on-the-ground commander.

His basic abilities are Incendiary, equipping an incendiary grenade launcher that can do area of effect damage through fire when used, and Stim Beacon, a device that will grant all allies in the general vicinity increased firing speed. His signature ability is Sky Smoke, which equips a tactical map that can be used to fire smoke bombs on targeted areas that block the vision of enemy players. His ultimate ability is Orbital Strike, which uses the same tactical map as his signature to fire an orbital laser on a targeted area to do high damage. 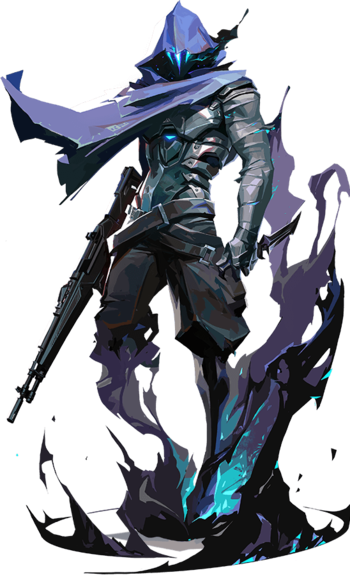 "Watch them run!"
"They fear death. They should fear so much more than that."
Voiced by: Jason Marnocha
A phantom of a memory, Omen hunts in the shadows. He renders enemies blind, teleports across the field, then lets paranoia take hold as his foe scrambles to learn where he might strike next.

"Don't get in my way!"
"Only five of them? Pity, I brought enough poison for fifty. You can't say I'm not prepared."
Voiced by: Ashly Burch
The American chemist, Viper deploys an array of poisonous chemical devices to control the battlefield and cripple the enemy's vision. If the toxins don't kill her prey, her mind games surely will.

Her basic abilities include Snake Bite, a vial that creates a pool of toxic chemicals that damage enemies, and Poison Cloud, a device that emits a cloud of toxic gas, and can be picked up from the ground to place somewhere else. Her basic ability is Toxic Screen, a row of devices that emit a wall of toxic gas. Both Poison Cloud and Toxic Screen work on a fuel meter; if the meter is empty, neither device cannot emit gas. Her ultimate ability is Viper's Pit, a massive gas cloud that persists as long as Viper is inside it. All who step into her gas will be nearsighted and enemies will be highlighted in red to Viper, though she still has the same range of vision that everyone else does while in it. Toxic gas will also decay enemies, reducing their maximum health so long as they're in the gas.