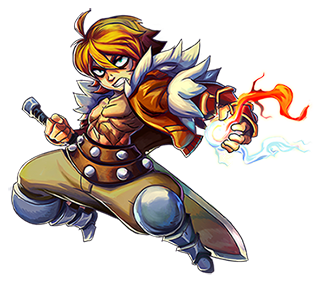 A wandering warrior in search of his father. 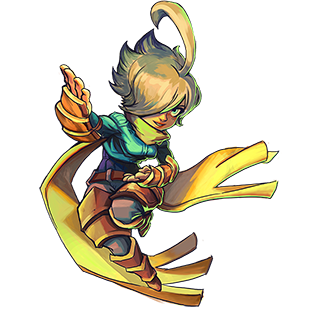 An orphan trained by monks. 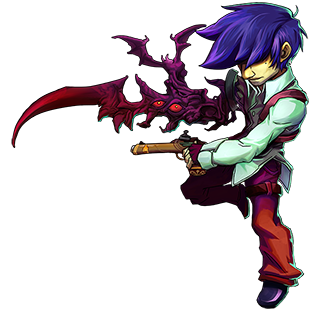 A man subjected to experiments with the purpose to contain countless demon and angel souls within his arm. 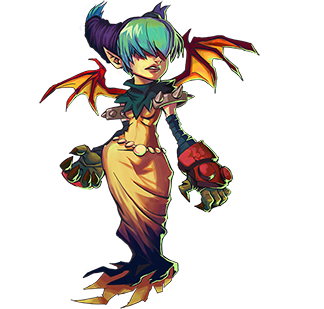 Part blight dragon, part demon on a mission from her late grandfather to find Cadeyrn Goibniu

Tropes applying to the Crew as a whole

The crew led by Wyatt, after having fallen from the Ocean to Sitheil, they become scattered throughout the game's world. Most of them were designed by the highest tiered backers for the game's Kickstarter.

Atalan was born in Sitheil after its fall. She is well known by the people of Sitheil for scavenging supplies in areas of the city that other can't or won't go into.

Faolan was raised by Reina. She found him as a pup alone in the woods near the monastery. He thinks of her as his mother and follows her closely at all times.

A notorious Pirate that was cursed after being caught stealing from a Myrgatian trade ship. She only travels with Wyatt and the others because they tend to cause a commotion everywhere they go, which is the perfect distraction for her to steal things.

An unscrupulous trader, who is more concerned with his secret stash of money than the fate of the world.

A talented Alagathian weaponsmith that abandoned his post when he found out his weapons were not only being used to fight demons. He did not agree with the common Alagathian idea that any human not allied with the angels was a threat.

No one knows exactly why this brilliant Alagathian mana weaver left the angelic army. He tends to avoid conflict, end everyone in the crew seems to be more relaxed when he's around

A cantankerous cat-like demon, who is very skilled with dark magics. He owes Wyatt a life debt after saving him from some templars to years ago. If it wasn't for the strict code of honor his people live by, he would have left the crew long ago... maybe. At least that's what he tells everyone.

A skilled weapon smith that just happened to be born a demon. He usually tries to hide his demonic features to avoid unwanted attention. He would rather spend his time tinkering in his workshop instead of spreading ruin in the name of Myrgato.

A talented young witch whose tribe was hunted down by a troop of soul rangers. She is protected by the phantom souls of her loved ones.

Not much is known of this trickster spirit. Vladyn believes he may be the return of a phenomenon recorded in ancient history known as Giadines.

A self taught warrior with a strong sense of justice. There is a bounty on his head from both sides of the war, because of his constant interference with the occupation of human territories. His powers of stealth have managed to keep him just out of reach thus far.

Growing up in the simple hunting village, the 14-year-old Reize was raised upon stories of exploration, adventure, and heroics by his father, a once well-known explorer and adventurer. Enthusiastic and compassionate, Reize makes friends easily, and he is idealistically committed to his own imagined 'Knight's Code', despite their ambiguity. Though his bumbling and lack of navigational abilities tend to cause him to show up at the wrong place at the wrong time, he is nevertheless eminently adaptable, and now on the path to becoming an explorer.

A tactical combat specialist from Iqor region. Best known for his role during the Greyvale occupation, where he and twenty other knights stalled the advance of five hundred demons while the residents of the city escaped to safety.

A former General of the Dark Army. She seeks revenge against Myrgato after being used as bait and having her entire regiment sacrificed in a failed attempt to draw out an opposing force from their entrenched position.

A sole survivor of a clan of frost giants that refused to join a side of the war. They were hunted down by both sides in order to prevent the giants' power from being used against them.

My name? I guess you can call me... Ben Mc Steely. Some people do. They're wrong, but they do call me that.

Has a very analytical and purpose-oriented mentality, but lacks social experience. Lacks a mental filter, so he has a few friends. Seems to get along with Wyatt... somehow.

A lazy spirit creature with a fondness for firearms. He was acting as the ships main cannon before the fall to Sitheil.

An easily irritated Half-Dragon that's descended from the Thunder Wing clan. Axen assists the crew only for the sake of screwing over both Goddesses, not really caring for the plight of mankind. Though the Thunder Wings have a long standing feud with Gilda's clan, the Blight Talons, Axen has put her hatred aside to deal with their mutual enemy......for now.

A wandering martial arts master that values friendship above all else. He's the sole survivor of an ancient clan of warriors that worshiped the Giadine of the Sun thousands of years ago.

A weathered mercenary that rarely speaks. He doesn't seem to trust anyone, and only allied with the crew out of convenience.

The grandfather of Atalan and leader of Tagrum village.

The leader of Ishk
Bosses