Universe Falls has a HUGE variety of characters from both Gravity Falls and Steven Universe. Note that the tropes listed here are (largely) exclusive to this fic.

As expected, this page contains unmarked spoilers. Read at your own risk.

A 12-year old boy hailing from Piedmont, California, and Mabel's twin brother. Spending time with his Great Uncle Stan (or "Grunkle") seemed like it was going to be one boring experience. But after he meets Steven Universe and the Crystal Gems, (as well as finding a mysterious journal) his vacation seems to have taken a more interesting turn.

Dipper's hyperactive and cheerful twin sister. Mabel makes the best of her time in Gravity Falls and almost instantly becomes friends with Steven.

The head of the Mystery Shack, and Dipper and Mabel's great-uncle ("grunkle"). While he is generally extremely miserly and cynical to everyone, he can sometimes show a more pleasant side to the people he cares for.

One of the workers at the Mystery Shack, who has taken the position as a job over her summer break. While she is generally very lazy at work, she has a large circle of friends, and is more than capable of doing things if she's motivated.

Stan's right-hand man, the oldest staff member of the Mystery Shack besides Stan himself, and the handyman.

The mysterious author of the journals. He disappeared thirty years ago, leaving his journals and a plethora of enigmatic secrets behind. He returns to his dimension at the end of Arc 5.

The sole male member of the Crystal Gems and son of Rose Quartz. He always wants to see the best in others and join the other Gems in their missions.

The leader of the Crystal Gems, and the calmest. Generally seen as the person that took over after the loss of Rose Quartz.

The youngest member of the main Crystal Gems. She is best described as rowdy and fun-loving. As well as a Foil to Pearl.

The strategist and brains of the Crystal Gems. She is very organized and motherly towards Steven and occasionally the twins.

Steven's mother, and the founder and original leader of the Crystal Gems, Rose Quartz passed away 13-14 years before the story began giving birth to Steven. She is actually Pink Diamond, who faked her shattering and assumed the identity of Rose Quartz permanently.

The fusion of Amethyst and Pearl.

The fusion of Garnet and Amethyst.

The fusion of Garnet, Pearl, and Amethyst.

The fusion of Steven and Connie, first seen in "Alone Together". 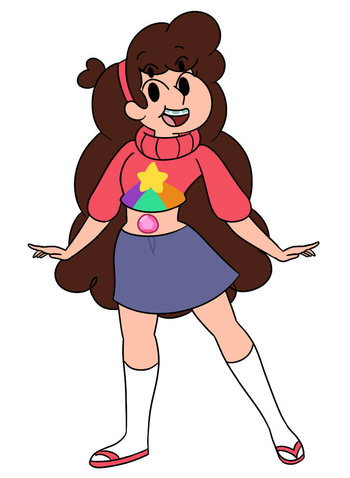 The fusion of Steven and Mabel, first seen in "Together Forever". Cheerful and enthusiastic, they embody the close friendship between the two, though because of this, they can be quite reluctant to split apart. 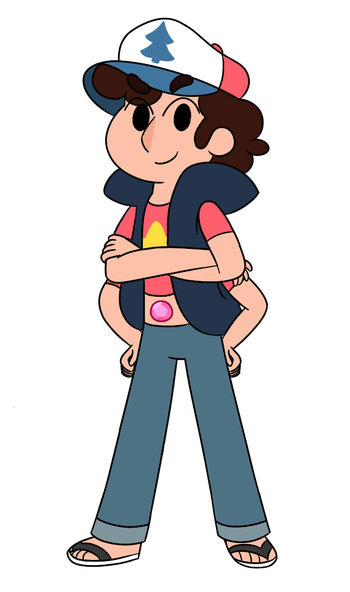 "But if you care so much about names, like some people do, then I guess you can just call me Stepper."

The fusion of Steven and Dipper, first introduced in "Forever Alone". He's initially unstable, being the merging of two drastically different personalities, but by the end of his debut chapter, he gains both harmony and confidence after the boys reconcile.

The fusion between Steven, Dipper and Mabel, first seen in "Three's a Crowd".

The fusion between Steven, Connie, and Dipper, who is first seen in "Crack the Whip".

The fusion between Steven, Connie and Mabel, they first appeared in "Theory of Weirdness". 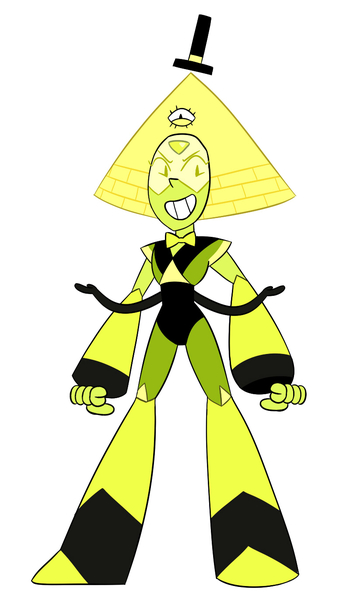 "What do you get when you take a dashing, well-dressed dream demon and a genius, technologically inclined upstart Gem and fuse 'em both together? Well, I'll tell ya what you get! The one, the only, all-powerful, unstoppable PYRITE!"

A fusion between Peridot and Bill Cipher.

A young girl in Gravity Falls and Steven's best friend. Whenever she gets the chance, she will tag along any adventures the Crystal Gems and Pines Twins are on.

Better known by his stage name Lil' Gideon. A (phony) psychic who has a crush on Mabel and a grudge against the Crystal Gems.

The richest, most popular girl in Gravity Falls and is in no way modest about it.

An angsty teenager and Wendy's boyfriend. At first.

Part of Robbie's gang and a friend of Steven's.

Husband to Rose Quartz, and Steven's father, Greg used to be a traveling musician, until he settled down in Gravity Falls after he met Rose.

Gravity Falls' resident kook who has a surprising talent for inventing.

A Homeworld Gem with the power to control water. She was trapped in a mirror for thousands of years before being set free by Steven, Dipper, and Mabel.
Minor Antagonists

An elite Homeworld quartz sent to act as Peridot's escort while investigating Earth.

A gem technician sent by Homeworld to reactivate the Kindergarten and check on the Cluster to view its progress.

Agents sent by the US Government to Gravity Falls to investigate the strange power spikes caused by the Portal, who quickly discover that far more is going on than they first thought.

A race-loving demon who haunts the Gravity Falls landmark aptly named Demon's Peak. She appears in "Gravity Falls Drift" and offers to give the kids an edge in their race against Kevin and his team.

A mysterious dream demon known for his odd, triangular shape and sick sense of humor. No one knows what Bill is planning, but he has formed an alliance with the Homeworld Gems.

The reclusive leader of the Diamond Authority.