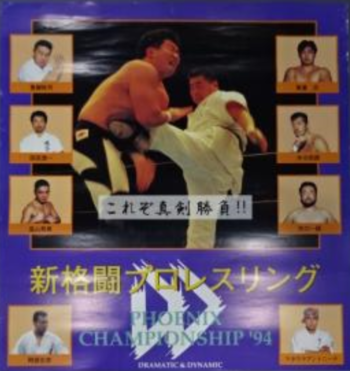 "Masashi Aoyagi of the Skinheads group was the only pushed wrestler who didn't sign a new contract for this year and he instead is forming his own promotion called Martial Arts Pro Wrestling with its debut show on 2/18..."
— Dave Meltzer
"Former New Japan wrestler Masashi Aoyagi (Skinheads) formed his own promotion called Shinkakutogi Pro Wrestling, or NSBW (New Stage Battle as Wrestling)."
— Dave Meltzer again

As a whole for both Seishin Kaikan and New Stage Battle Pro Wrestling:

"WWE has characters, and it's not that big a deal. You need characters that people can understand and like, but that's not as important as skill. Characters are different in the United States than they are in Japan. Skill and fighting spirit are most important, much more than character, in Japan. Ultimately, my most important thing is my partner, Jado. I choose to stay with my partner."

"Two of them were Jado and Gedo, who I'd met while they were making pennies working in Mexico. They'd follow Dragon's path and gone to Mexico after being told they were too small for New Japan. They were also tremendous performers and were major contributors to the strengthening WAR junior division."
— Chris Jericho, in his autobiography; A Lion's Tale: Around the World in Spandex.