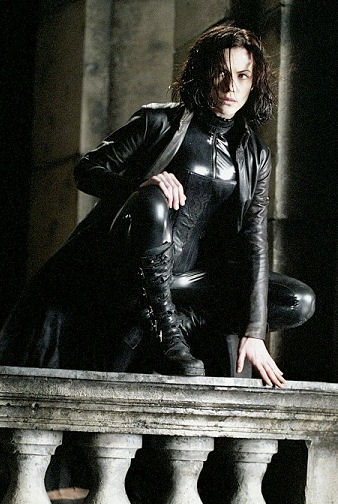 The main protagonist of the series. Selene is a vampire and one of the best Death Dealers in the Fur Against Fang war, believing that her family were slaughtered by Lycans. She was turned by Viktor because she reminded him of his deceased daughter Sonja. She is a skilled marksman and fighter, making her probably the most prominent badass in the series.

She has a change of heart when she falls in love with human-turned-Lycan Michael Corvin, and is responsible for turning Michael into a Hybrid Monster. She finds out that Viktor killed her family, and she kills him by slicing his head in two. In Evolution, she learns her family built William's tomb, hence why Viktor killed them, and becomes a true immortal after drinking Alexander Corvinus's blood, and kills Marcus.

A descendant of Alexander Corvinus, Michael is an ordinary nurse until he becomes the target for the Lycans to create the first vampire/Lycan hybrid. He is turned into a Lycan by Lucian and later is bitten by Selene to heal him from gunshot wounds. This makes him a hybrid, and one of the series' many badasses. He becomes Selene's boyfriend and currently one of two people to still be alive in the series, the other being Selene.

The first Lycan born with the ability to turn back into a human. Lucian falls in love with Sonja, a vampire, and they become Star-Crossed Lovers. When Viktor finds out, he has his daughter executed via sunlight, kicking off the war between vampires and Lycans. Lucian fakes his death with help from Kraven and spends the next few centuries trying to find a descendant of Alexander Corvinus who has the right blood to create the first Hybrid Monster. He succeeds in turning Michael into one with help from Selene, but is gunned down by Kraven.

The Big Bad of Underworld and Rise of the Lycans. Viktor is one of the three Vampire Elders, and the foster father of Selene. Having Fantastic Racism against Lycans, Viktor went to great lengths to either control or kill them including killing his own daughter Sonja when she became impregnated with a vampire/Lycan hybrid.

Played By: Zita Görög in Underworld and Evolution and Sveta Driga in Blood Wars

The second of the Vampire Elders. Hardly anything is known about her, making her a bit of a Flat Character. However, she aided Marcus and Viktor in catching William and sided with Viktor to imprison him forever. She has since been revealed to have been the lover of Thomas and the mother of his son, David.

The third Vampire Elder, and son of Alexander Corvinus. He was bitten by a bat and became the first vampire. With his Lycan brother William out of control, Marcus recruited Viktor, Amelia and their army to catch his brother, only for Viktor to double-cross him and take control of the vampires and imprisoned William forever. In the second film, he is turned into a hybrid and vows to free his brother and rule the world with a new series of hybrids.

Alexander Corvinus's second son, and the first werewolf. Unlike Lycans, William could never regain his human form and was imprisoned by Viktor in a tomb, which was built by Selene's father. 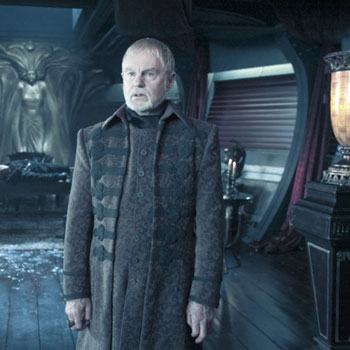 Where It All Began, Alexander Corvinus became the first true immortal after his village was ravaged by a plague which he was able to mold into what gave him his immortality. He then fathered three sons, Marcus, William and a third son. Marcus and William were bitten by a bat and a wolf, becoming the first vampire and werewolf, leading to the rest of the events in the films. The third son remained human, but carried the Corvinus Gene that would later lead to Lucian's quest to find a descendant who could adapt to vampire and Lycan blood.

Played By: Jazmin Dammak in Underworld and Rhona Mitra in Rise of the Lycans

The daughter of Viktor, and Lucian's lover. The two were the original Star-Crossed Lovers, Sonja becoming impregnated with the first hybrid. Viktor was furious when he found out and had her executed via sunlight, kicking off the war. Lucian stole her necklace, actually one of the keys to William's tomb.

Viktor's Dragon, Kraven is in charge of the old coven during Viktor's slumber. A Smug Snake and a Manipulative Bastard, Kraven helped fake Lucian's death to become a hero among the vampires, and to keep Lucian's plan under wraps. Their ultimate agreement is to eliminate the vampire elders, so Kraven can rule the vampires and Lucian can create the hybrid. Kraven has a thing for Selene, despite being perfectly willing to engage in casual sex with Erika. 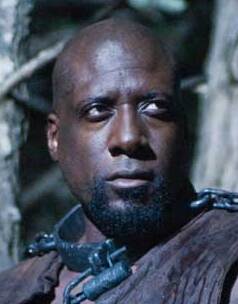 Lucian's closest friend and a Scary Black Man. He became a Lycan in Rise of the Lycans and helped Lucian fight back against their vampire suppressors. He has a rivalry with vampire Soren going back to their earliest days. And yes, his voice is actually that deep.

Kahn is the weapon's specialist in the coven and head of security. He clashes with Kraven, and is just as suspicious of him as Selene is. He is a skilled marksman and inventor, replicating the Lycans' sunlight weapon with silver bullets which can harm Lycans on the genetic level. 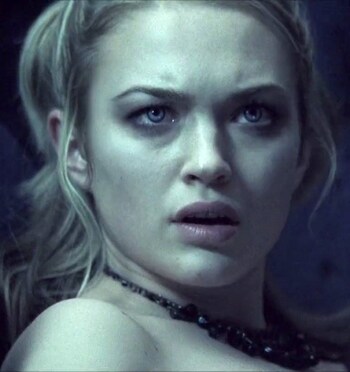 Kraven's one-and-off girlfriend, Erika is pretty much used by Kraven for sex, and he treats her like dirt whilst pining after Selene. Erika discovers that Michael is a Lycan and tells both Selene and Kraven. After finding out that Kraven intends to make Selene his queen, Erika ditches him and frees Selene from her imprisonment to get back at Kraven. Her fate afterwards is unknown. In the novelization, she and Selene have a somewhat tenuous friendship, and it's mentioned that she left the mansion and "wondered if Viktor liked blondes." 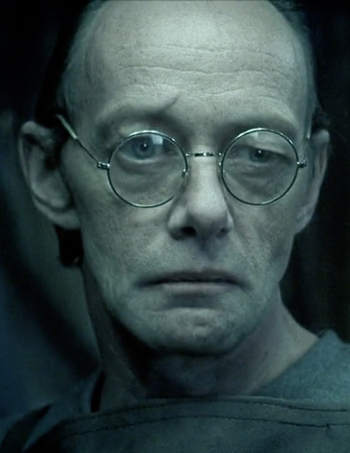 A scientist Lycan, Singe has spent years trying to find the right carrier of the Corvinus strand, and is at his wit's end. Lucian delivers him Michael's blood and he is proven a carrier. Singe is sent to help retrieve Michael from the vampires but is captured by Selene and forced to reveal Lucian's plan and Kraven's treachery. After Amelia is killed, Viktor punches him to death.

Kraven's minion and once Viktor's bodyguard. Little is known about him, but he has a rivalry with Raze. He uses a pair of whips in battle, and is killed by Raze.

Formerly the historian of the vampire coven, Andreas Tanis was exiled on Viktor's orders, by Selene, for telling "malicious lies".

Played By: John Mann
The second in command of Alexander's Cleaners.

Introduced in Underworld: Rise of the Lycans

Portrayed By: David Aston
A senior member of the vampire council concerned about Viktor's mismanagement.
Sabas and Xristo

A young Hybrid Monster who Selene finds after awakening 12 years after the purge of vampires and Lycans.

Introduced in Awakening, David is a survivor of the Purge. The Idealist of the film, David aids Selene, willingly helping her and Eve escape the humans and Lycans. He believes the vampires should honor their predecessors and fight back, being at odds with his father Thomas.

David's father and ersatz Elder of the surviving Western Coven vampires following the deaths of Amelia, Viktor, and Marcus. Unlike his son, he feels that continuing to fight will only hasten the demise of their species and favors hiding out until things blow over. Roughly 20 years before the events of Underworld, he became the lover of the vampire Elder, Amelia, resulting in David's birth, but was forced to break off the relationship and go into hiding for David's safety.

The first human since Michael to become a prominent character in the films. A police detective who pities the vampires and Lycans, Sebastian teams up with Selene to take down Antigen to save Eve and avenge his dead vampire wife.

Chief scientist at Antigen, Jacob Lane kept Selene, Michael and Eve as test subjects to find an antidote to the vampire and Lycan viruses.

A wolf known as the Uber Lycan, Quint kidnaps Eve so Dr. Jacob Lane can use her to create an army of Lycans.

One of the leaders of the Eastern Coven, who plots to take over the coven and make herself a Hybrid.

The Lycans' new leader in Blood Wars and one of the deadliest Lycans since Lucian, who seeks to use Eve's blood to increase his power.

The lead Death Dealer of the Eastern Coven and ally to Semira.

A Death Dealer in the Eastern Coven, who is secretly Marius' lover and spy.

One of the leaders of the Eastern Coven, who greatly despises Selene for killing Viktor.

A member of the Nordic Coven, with special abilities granted by a 'cocooning' process known only to her people.

The leader of the Nordic Coven and Lena's father. He was a close friend to David's father Thomas and the Elder Amelia.