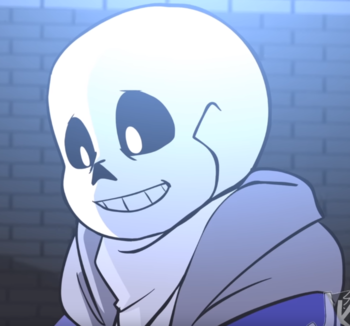 The first iteration of Sans to have ever been created. He acts exactly like his game counterpart, being lazy and full of bad puns, or so we are to believe. 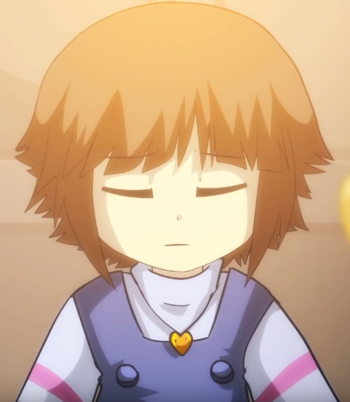 "Is our universe the only one left?"
The former owner of the main timeline. They currently act as the monsters' ambassador on the surface. 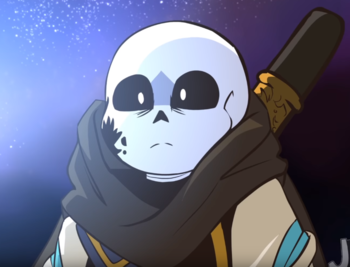 "They are not my friends."
The main protagonist (somewhat) of Underverse. He serves as the guardian of all the Alternate Universes that have ever been created. He is a very odd and imaginative individual.
Dream 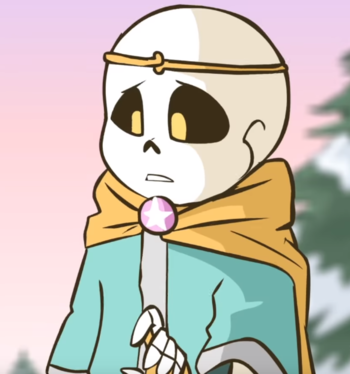 "I can sense three souls with very strange feelings..."
Protector of Dreams and Positive feelings, Dream is the embodiment of positive emotions, constantly having to keep his brother, Nightmare, in check.
Error 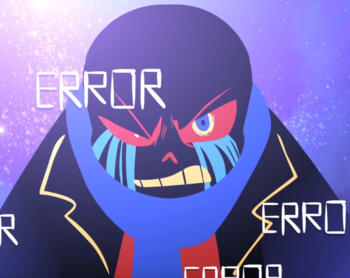 "It's enough. I'm tired of this."
A corrupted version of Sans that formed after a glitched reset of a broken timeline. He believes all Alternate Universes and their characters to be "Anomalies" and thus believes they should be destroyed. One of his main goals is to find the "Omega Timeline" and destroy it because of the amount of anomalies there that have evaded him. 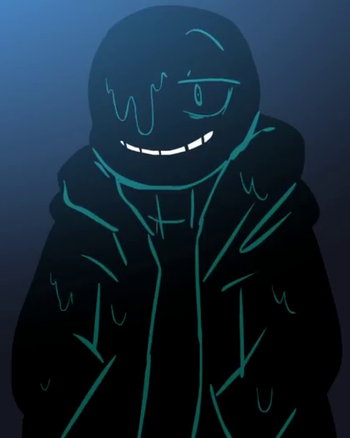 "Wherever you go, I want you to hurt somebody, but not physically. You know what I'm talking about."
A nightmarish-looking Sans who is attracted to the negative feelings of others, feeding off of them. He makes a deal with Cross in order to spread these negative feelings across the other Alternate Universes.
Killer 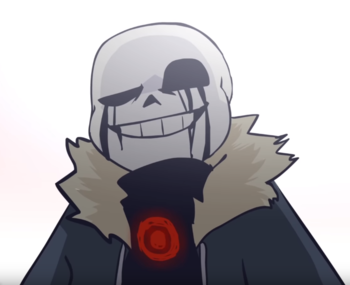 "Congratulations, Alternate Universe trash. You have learned something interesting today."
A version of Sans that is summoned by Nightmare when X-Event!Chara proves to be unreliable. Because he comes from an Alternate Timeline rather than an Alternate Universe, he has access to the original Sans' memories and thus knows about the X-Event and the damage they've caused, making him fairly dangerous.
Fell 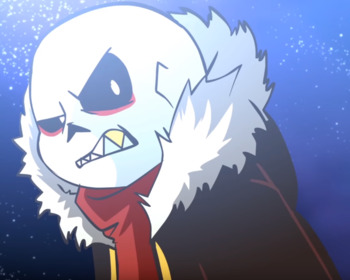 "What did you do this time, you idiot!"
A version of Sans that is much more violent and prone to anger than the rest of his counterparts. He hates everyone and everything, but reluctantly goes with the heroes because he's on the run from his "boss".
Swap 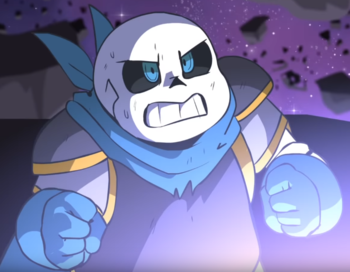 "I want to help you...But I can't believe in you."
Another version of Sans that is the most cheerful and optimistic. He loves tacos and everything about his brother and the Royal Guard. He joins the main cast for a while after his own pacifist timeline is erased, leaving him without a home to go back to. 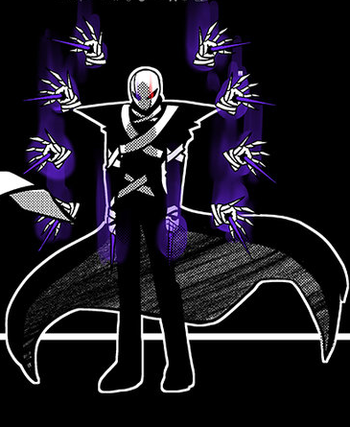 "EVOLUTION REQUIRES SACRIFICE."
Click here to see him with half his soul 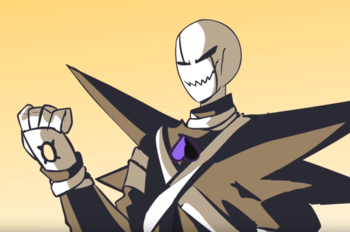 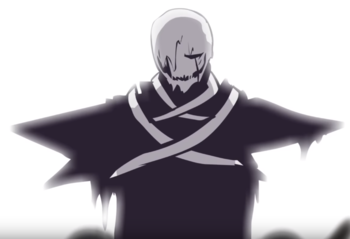 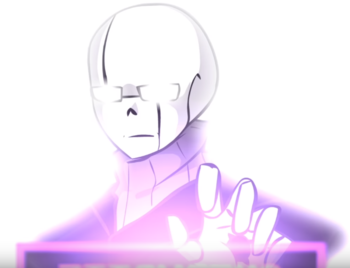 The Man Behind the Man of the events in Underverse. Once the benevolent creator of X-Tale, XGaster longed to create the perfect world, but fell into despair when he was unable to do so. After meeting Ink and seeing the Doodle Sphere, he became inspired to try something new, culminating in the X-Event and the gradual control of all the multiverse.
XTale!Asriel | I 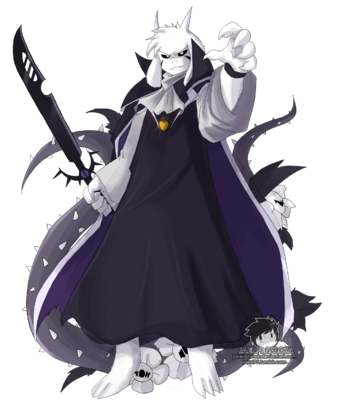 "Stay determined, for our freedom."
ENTRY NUMBER 0. TIMELINE NUMBER 1.
THIS IS OUR HOME. I WILL DO THE BEST FOR THEM.
The adoptive brother of XTale!Chara and XTale!Frisk. Was the receiver of the heart locket in X-Tale's first timeline, and was the first to fall victim to the overwrite button.
XTale!Asgore | II 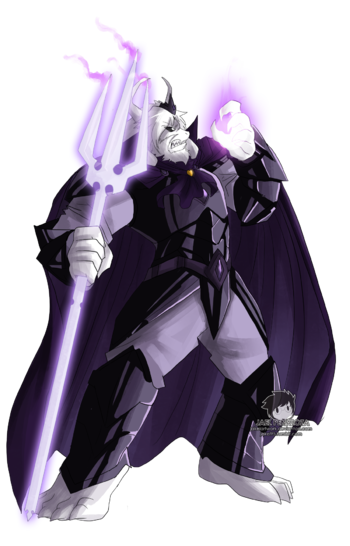 ENTRY NUMBER 1. TIMELINE NUMBER 2.
MAYBE...DEATH CAN MAKE THIS MORE INTERESTING.
The guardian of XTale!Frisk and XTale!Chara. Was the receiver of the heart locket in X-Tale's second timeline, where he was killed by XGaster out of his own interest.
XTale!Toriel | III 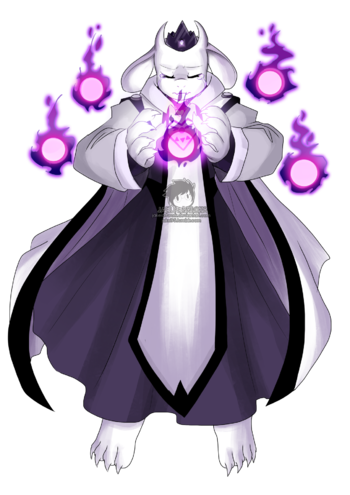 ENTRY NUMBER 2. TIMELINE NUMBER 3.
THEY SAY I AM AN "INSECURE OLD MAN". I DO NOT NEED THE OPINION OF TWO INSOLENT BRATS.
The adoptive mother of XTale!Frisk and XTale!Chara. Was the receiver of the heart locket in X-Tale's third timeline, of which she spent little time before being overwritten by XGaster.
XTale!Muffet | IV 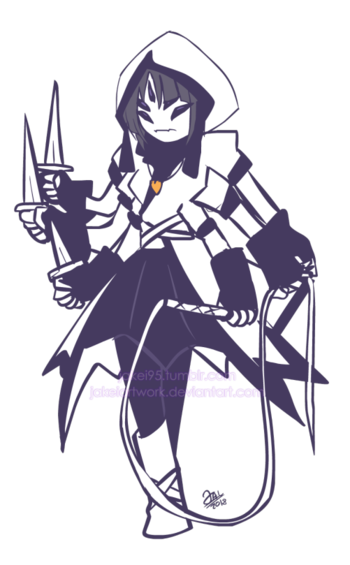 "Do you want to lose your brother or what? WAKE UP!"
ENTRY NUMBER 2. TIMELINE NUMBER 4.
THE OTHER CHILD HAS REBELLED AGAINST ME.
A spider-monster with a love for baking. Was the receiver of the heart locket in X-Tale's fourth timeline, where she convinced XTale!Chara to rebel against XGaster.
XTale!Undyne | V 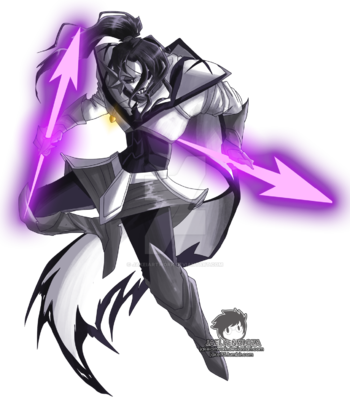 "You're better than that, my dear student..."
ENTRY NUMBER 0. TIMELINE NUMBER 5
I CAN SEE THE HATRED IN THEIR EYES.
The captain of the Royal Guard. Was the receiver of the heart locket in X-Tale's fifth timeline, where she trained XTale!Chara to fight against XGaster.
XTale!Chara | VI 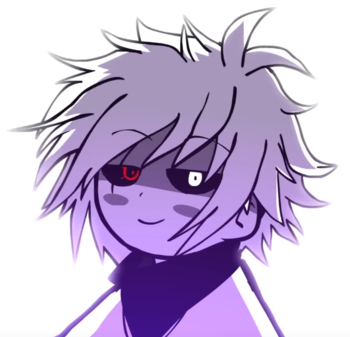 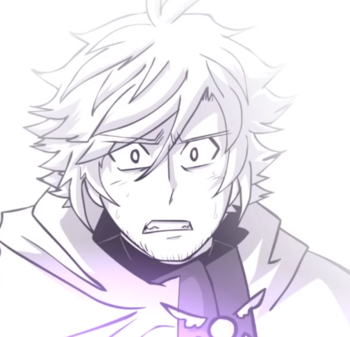 ENTRY NUMBER 0. TIMELINE NUMBER 6.
CHARA IS THE STRONGER ONE.
The X-Tale version of Chara. Originally, he was the eldest son of XGaster when his universe was created, but as his father's perfectionist attitude got to be too much, he tries to rebel against him until he was chosen to be the prime subject of XGaster's X-Event experiment because in his words, he was the stronger one. He later teamed up with his brother in order to try and overthrow him so that they could become the owners of X-Tale. Unfortunately, they failed and their world was destroyed, including his brother.

He was absorbed and kept prisoner inside of Cross' body until Error unintentionally freed him. From there, he appeared to Cross as a metaphysical spirit, influencing some of his actions, culumating in gaining control over his body until his demise by XGaster in 0.4. Now he's part of XGaster's cast of minions, ready to create one perfect universe. 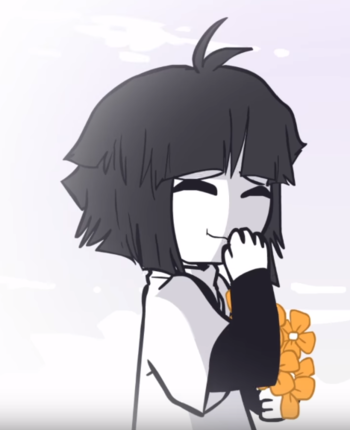 "I'M TIRED OF YOU."
Click here to see his older appearance. 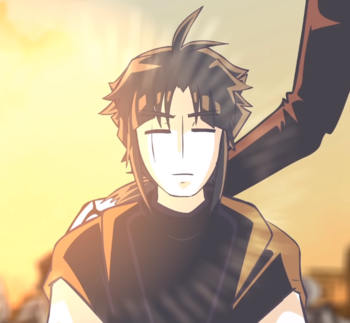 ENTRY NUMBER 2. TIMELINE NUMBER 7.
THE MASTERMIND HIDDEN WITHIN ANOTHER BODY.
The X-Tale version of Frisk. Originally, he was the younger son of XGaster, but after being abused by his father, his determination becomes dejected and his father nearly deletes him until X-Event!Chara decides to take him as a vessel for his soul. This gave him the power of the X-Event, and growing tired of his father's "game", he attempts to pull a Batman Gambit on Cross which ultimately fails. Now, he's brought back to be part of XGaster's crew for when they create their one singular universe with the best of others.
XTale!Mettaton | VIII 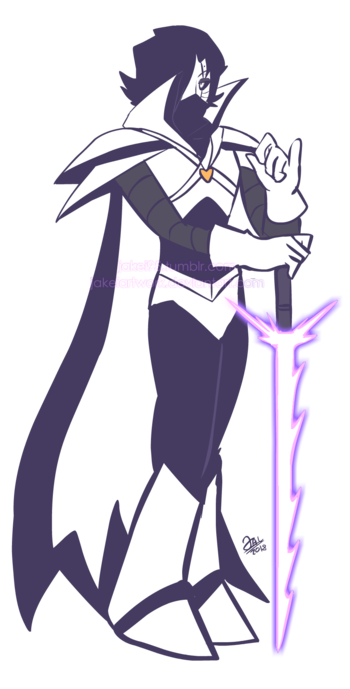 ENTRY NUMBER 0. TIMELINE NUMBER 8.
THE X-EVENT HAS MADE ITS FIRST CREATION.
The first creation of the X-Event. Was the receiver of the heart locket in X-Tale's eighth timeline, where he tries to defend his creator from XGaster for his fierce attitude against his creation.
XTale!Papyrus | IX 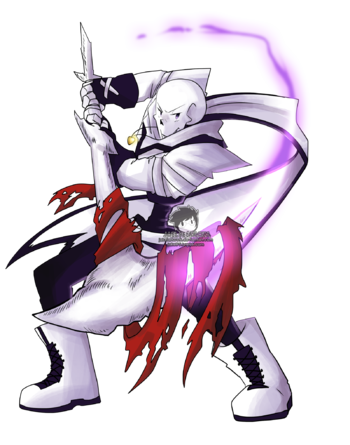 ENTRY NUMBER 0. TIMELINE NUMBER 9.
I AM NOT DONE YET. THEY CAN'T DO THIS TO ME.
The younger brother of Cross. Was the receiver of the heart locket in X-Tale's ninth timeline, where he loses faith in X-Event!Frisk for his alienating personality.
Cross | X 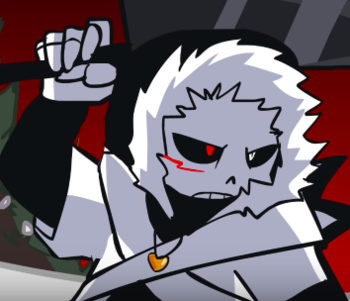 "I must continue with the job...brother."
Click here to see him after XGaster revives him. 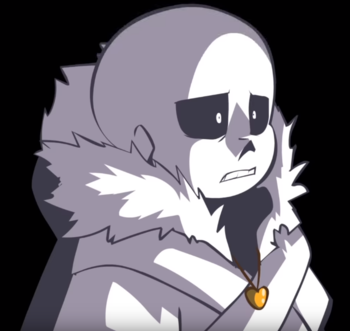 ENTRY NUMBER 0. TIMELINE NUMBER 10.
THE EXPERIMENT WAS A SUCCESS. NOW IT IS TIME TO GIVE IT A NAME.
The X-Tale version of Sans and the older brother of XTale!Papyrus. Was the receiver of the heart locket in X-Tale's tenth timeline, where he tries to claim the X-Event experiment as his own, and ultimately realizes the limitations of the experiment and breaks down. He ends up attempting to recreate his own universe after stealing half of Classic!Sans' soul, by extracting resources from the other universes with the help of Nightmare!Sans, but he is stopped before he could recreate his own universe, and ends up being overtaken by X-Event!Chara until his demise by XGaster. He is brought back and is shown to be leading an army of alternate universe survivors against XGaster after the demise of the Doodle Sphere.
XTale!Alphys 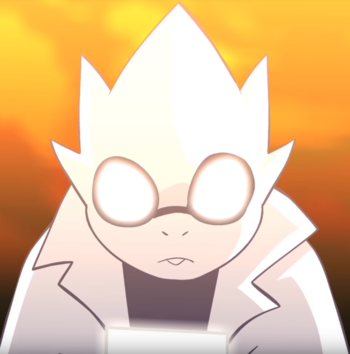 "I truly comprehend your pain."
The loyal assistant to XGaster who follows his orders without question. She managed to survive alongside him when X-Tale was corrupted and has since been carrying out his work for him, watching over until the third phase of XGaster's game commences. 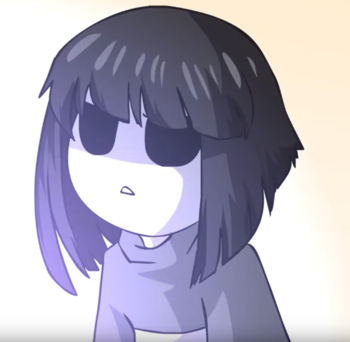 "It's their fault."
A version of Frisk, who after resetting the timeline over and over again, was thrown into the CORE by their Sans. However, rather than being scattered across time and space, their determination allowed them to become an omnipresent being who could travel to any timeline in any universe. Their job is to go to timelines that are deserted or collapsing and take the survivors to the "Omega Timeline", a safe haven where all timeline survivors can live together in peace.
Outer 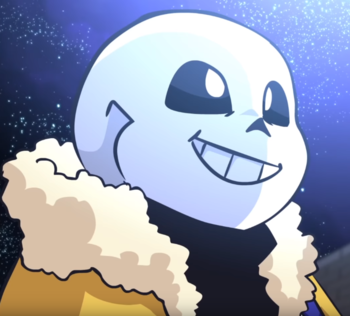 "Anyone is always welcome. After all, I'm not the owner of this world."
A version of Sans who lives in outer space. Personality-wise, he's not all that different from Sans, sharing his love for jokes and his brother. He believes the sky is big enough for everyone and can't imagine having to deal with artificial stars.
Fresh 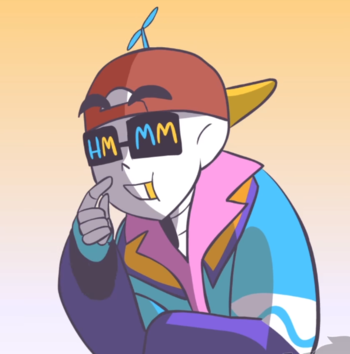 YO BROWSKI!! LONG TIME NO SEE!! HOWZZITGOIN'
A version of Sans who is based off of the 80s/90s and Error's brother. His job is to watch over X-Tale per Ink's instructions and make sure nobody else enters.