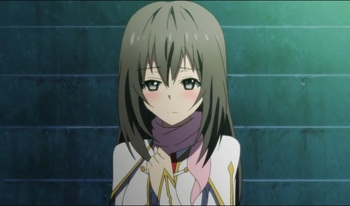 for his crossdressed appearance as "Luno"

The protagonist whose actions form the basis of Undefeated Bahamut Chronicle. Lux is the former seventh prince of the Old Arcadia Empire. After the death of his mother, wanting to change the decadent Empire, he becomes the youngest Drag-Knight in order to have an audience with his estranged father the Emperor. When words failed, he plots with his older half-brother Fugil to bring the end of the Empire as peacefully as possible.

After the Empire's fall, under the amnesty of the current kingdom, he becomes the "Chore Prince" of the New Kingdom Atismata to do odd jobs under parole to pay a debt of about 1/5 of the nation's wealth. One day, when trying to retrieve a girl's bag from a cat, he falls through the roof of an all girl's academy's communal bath. He then saves a girl from some falling debris and ends up straddling on top of her. After some misunderstandings and fighting, Lux becomes the first male student of the Royal Knight Academy.