Character sheet for Unbreakable Kimmy Schmidt and Kimmy vs. The Reverend. 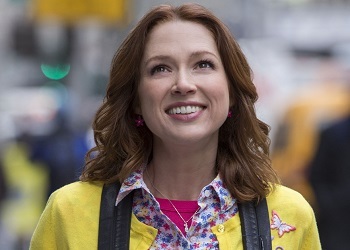 "Smile until you feel better. I call it Kimmying, watch!"
Played By: Ellie Kemper

The titular character, she was trapped alongside three other women in an underground bunker for fifteen years after being kidnapped by an insane religious cult leader and told the world had ended. After being rescued and seeing that the apocalypse had, in fact, not occurred, she decides that instead of going back to Indiana (where she knows she'll be treated like a victim), she'll start a new life in New York. She's always smiling and is a general source of light to the people around her. 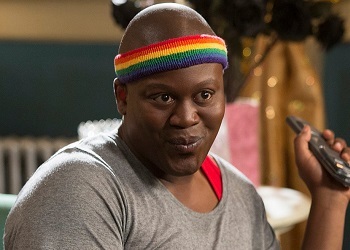 "I'm pretty but tough like a diamond. Or beef jerky in a ball gown."
Played By: Tituss Burgess

One of Kimmy's first post-bunker friends as well as her roommate, he has been living in New York for years. After having given up on his singing dreams due to financial troubles, Kimmy convinces him to follow his dream again. 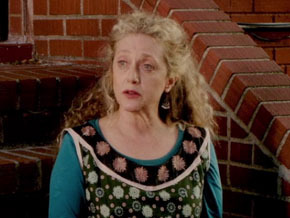 "Hey, can I borrow a cup of flour? Some white kids outside want cocaine... "
Played By: Carol Kane

Kimmy and Titus' landlord. Very friendly to both of them and often accompanies Titus on his adventures, although she's a bit odd, either due to old age or drugs or just being weird in general. 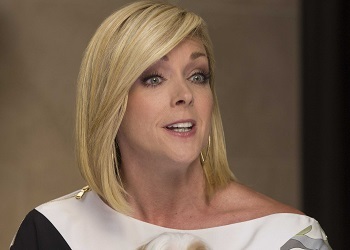 "I'm not running a charity here, except the one where I donate my old towels to poor people with the same initials as me."
Played By: Jane Krakowski

The rich wife of Julian Voorhees, as well as mother to Buckley and stepmother to Xanthippe, she is a vapid, rather ditzy woman who hires Kimmy to be a nanny for Buckley and generally work for them. She and Kimmy become friends, despite a rocky start. 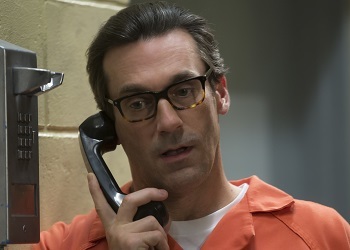 "The only book I ever read was The Good Book. The Andromeda Strain by Michael Crichton."
Portrayed By: Jon Hamm

The senior prophet and CFO of Savior Rick's Spooky Church of the Scary Apocalypse and is responsible for kidnapping Kimmy Schmidt and three other women, holding them captive for 15 years. 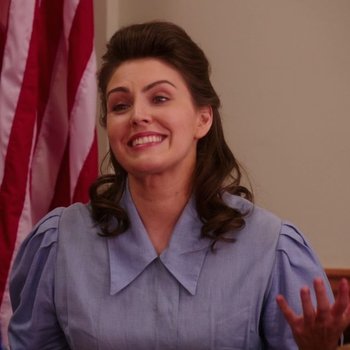 "I've got a clean brain, you could eat off of it"

A willing member of the cult, who believes everything she was told. 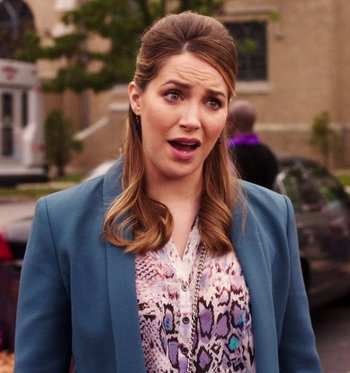 "Yes. I had waited on Reverend Richard a bunch of times at a York steakhouse I worked at. And, one night, he invited me out to his car to see some baby rabbits and I didn't want to be rude so... here we are."

Kimmy's best friend from the cult. 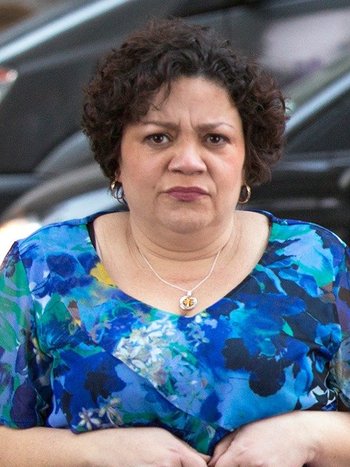 A Mexican maid who was tricked into going into the bunker as a "job opportunity." 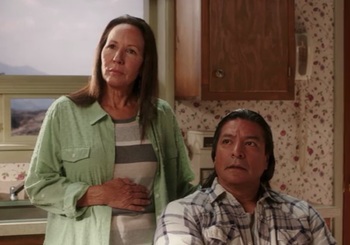 "We didn't say anything when you dyed your hair and when you got blue contact lenses or even when you started saying things like "neato" and "tennis."" 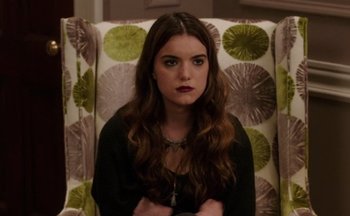 "Stepmothers are not scary, nannies are not magical, and dwarfs do not let you spend the night at their house without expecting something."

The pretty, popular, and seemingly bratty stepdaughter of Jacqueline, who is later revealed to be hiding her high achieving, 'good girl' personality. 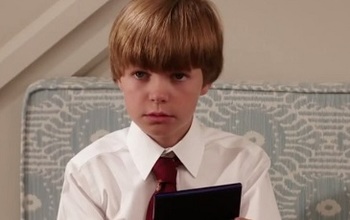 "Can we go sit someplace quiet like a shoe store?" 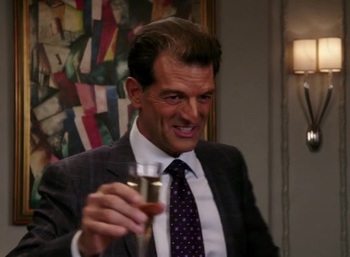 My company, Rapier Private Equity, is teaming up with the brilliant Isaye Watanabe to bring a technology to the market that will change the face of health care, the service industry, and one day, I truly believe, prostitution.

Jacqueline's often absent husband. Jacqueline is his second wife, after his first wife had the temerity to turn fifty on him. 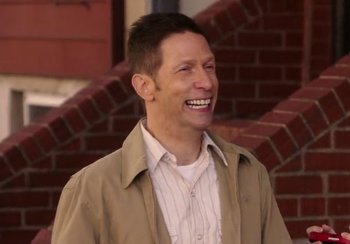 "Hey! What did I tell you about using sarcasm, little lady?"

Kimmy's stepfather, a very incompetent state trooper who met Kimmy's mother while searching for and failing to locate the missing Kimmy. 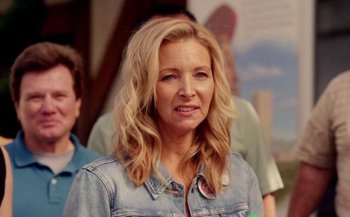 “I just was trying to get one minute of peace on a mechanical bull.” 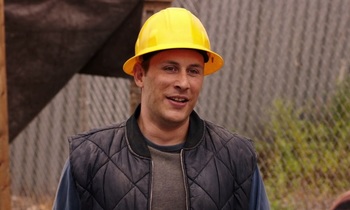 "It never even occurred to me that you could play video games with a guy and watch sports with him and, like, touch butts and stuff, all in one guy!"
Played By: Mike Carlsen

A construction worker who hits on Kimmy, only to realize he's gay thanks to her response. He becomes Titus' boyfriend in season 2. 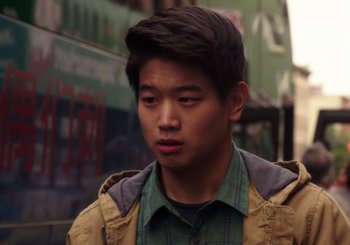 I don’t want to go back to Vietnam, Kimmy. It’s full of baby-boomer tourists trying to feel something.

An upscale man from a wealthy family who was interested in Kimmy.

Buckley's tutor (who doesn't teach him so much as actually do his homework for him) and Kimmy's first boyfriend.

A former flame of Lillian's.

An attorney that Jacqueline pursues.

A philosophy college student who manages to get to Columbia. He and Kimmy have a flirtatious relationship.

The owner of a supermarket franchise "Big Naturals". He falls for Lillian when they have to work on the construction of the Big Naturals of her neighborhood.

Titus' boyfriend in season 3, a church choir singer with a young daughter.

Introduced in Kimmy vs. The Reverend as Kimmy's fiance. Frederick is a distant heir to the English throne who is thrilled to be marrying Kimmy. 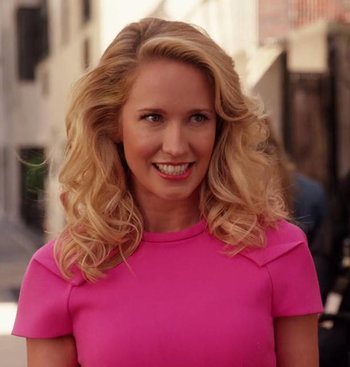 Russ' father and the Snyders' patriarch.

Russ' brother. He is Russ' main bully and is much more favored by the family than him.

Incompetent prosecutors in the case against "the Reverend".

Dong and Kimmy's classmate who Dong marries to stay in the country. 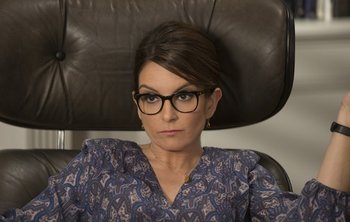 "We're gonna figure this out like a couple of lesbians hooking up a hot-water heater."

A bipolar therapist who is put together at day, but drunk at night. 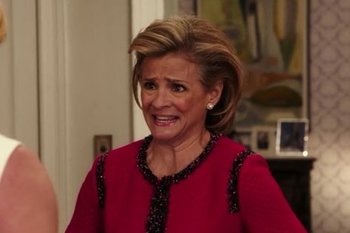 An acquaintance of Jacqueline's who suffers from her divorce.

Reverend Wayne's fiancée who intends to marry him as soon as Kimmy divorces him.

A classmate in Kimmy's philosophy class who eventually seeks her out for advice.

A man who is supporting Reverend's Wayne's fight for freedom, as well as that of a number of men accused of sexual harassment, leader of a organization called The Innocence Broject. He sells bridal wear as a day job.

Artie's troubled daughter. A party girl who tries to pretend to have her act straight to get her brother to give her access to her trust fund.

Alternative Title(s): Kimmy Vs The Reverend