A race of intelligent Human Aliens from the Planet U40, who's culture is similar to the Ancient Greece, down to wearing Himation and Toga. A long time ago, the U40 residents were advanced beings who wished to expand their race further to the outer space. Earth was one of the stars they visited and established the very first human civilization with Neanderthals. To combat any extraterrestrial threats that harm the safety of their planet, they created the Ultra Mind energy source that transform them into Ultra Warriors, now calling themselves as Ultra Humanoids.

When the Earth was plagued by mysterious phenomenon, the Ultras sent their message and strongest warrior Joneus to guard the planet from monster attacks.

Background U40 people are voiced by: Takeshi Aono, Norio Wakamoto 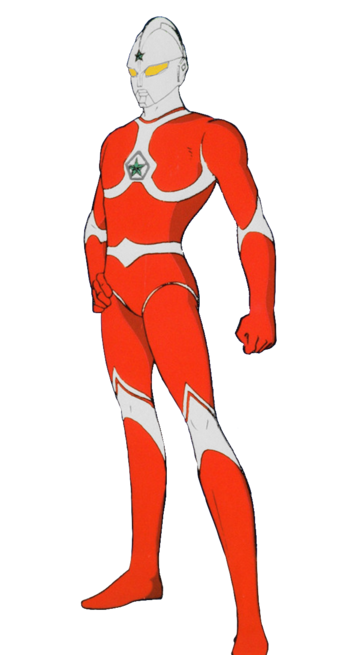 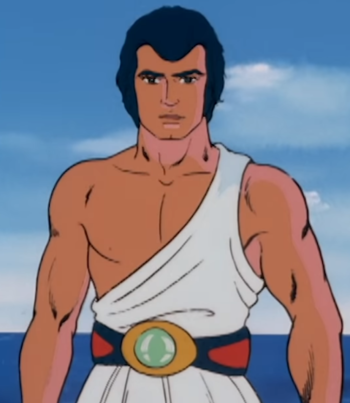 to see Joneus in live action suit.
The main Ultra of this anime series, Joneus is the leader of the great 8 Ultra Warriors and the strongest among his race. He was sent to Earth by the Great Sage to defend Earth from monster and alien attacks while bonding himself to Choichiro Hikari, a young man who was on his trip back to Earth.
Elek 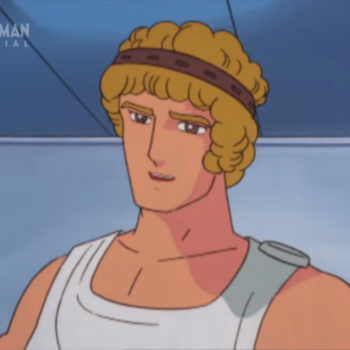 to see Elek's human form.
The second Ultra to appear in the series, way back in episode 19. He was the one who was summoned to Earth by Joneus and picked him and Hikari after the two had died from fighting Bedorun. Alongside Loto and the other great 5, Elek is also one of the great 8 warriors chosen by the Great Sage as warriors of U40. After the war with Badel Tribe, Elek and Loto occasionally appear on Earth to assist Joneus in his fight against invaders, eventually joining the other U40 remnants as members of La Résistance to reclaim the Planet U40 when it was taken over by Heller.
Loto 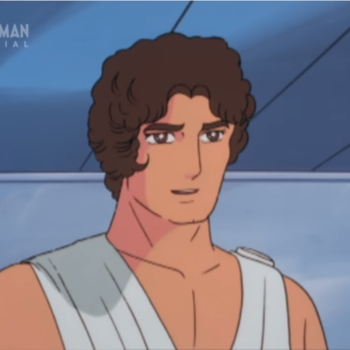 to see Loto's human form.
The third Ultra to appear in the series, starting in episode 20. Alongside Elek and the other great 5, Loto is also one of the great 8 warriors chosen by the Great Sage as warriors of U40. After the war with Badel Tribe, Loto and Elek occasionally appear on Earth to assist Joneus in his fight against invaders, eventually joining the other U40 remnants as members of La Résistance to reclaim the Planet U40 when it was taken over by Heller.
Amia 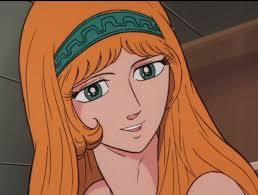 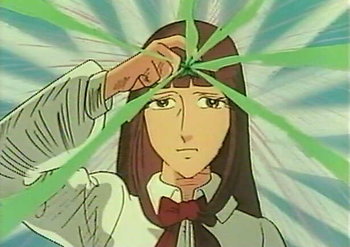 to see Kyoko Kodaka.
Joneus' little sister, who was responsible for tending Hikari after his injury from fighting Bedorun on Earth. After their moment in fighting against the Bader Tribe, Amia becomes smitten to Hikari.
Great Sage

The ruling figure of U40's citizen and its society.

The great 5 warriors
The other five chosen warriors of Planet U40 aside from Joneus, Elek and Loto.
Zamius 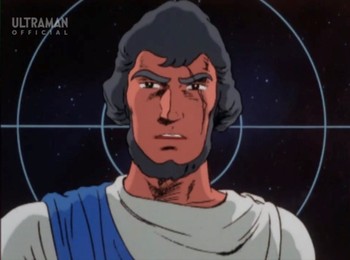 The commander of U40 Fleet in their campaign against the Badel Tribe. His only appearance was in episode 21.
Ultraman Titas

Ultraman Titas is the second Ultra Warrior that dwells inside Hiroyuki. He is a warrior and a sage from Planet U40, the birthplace of Ultraman Joneus, as opposed to the Land of Light in Nebula M78. With his carefully trained body and healthy spirit, he is skilled in heavyweight battles.

The main antagonist in the final arc of The Ultraman, from episode 37 to episode 50. Lead by the namesake Heller, it was a group of 3,000 Ultra People of U40 who follow Heller's ideals of abandoning their Ultra forms over immortality. Due to the perverted nature of this, they were banished to the depths of the Dark Nebula for their actions. They returned 10,000 years later with an amassed army fleet, invading their original home planet as revenge for their initial banishment while seeking to expand their universal conquest to even the planet Earth due to Joneus' presence on it.
As a whole
Heller 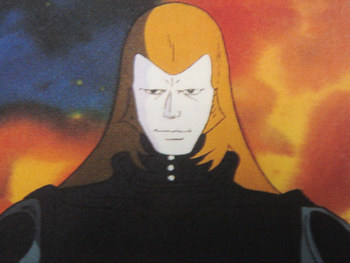 The main antagonist of The Ultraman since episode 37 and the de facto leader of Heller Empire and its armies. After being banished into the dark nebula with his 3,000 supporters, Heller sworn to have his revenge by building his empire. After invading his former home planet, Heller decided to expand his conquest to the entire galaxy by invading countless planets, with Earth as his next target due to Joneus' presence over there.
Royger 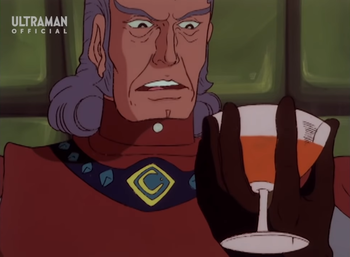 Heller's right hand man. He is the de jure leader of the army and oversees the invasion on Earth by setting up base Titan in one of Saturn's moons.
Heller's Soldiers 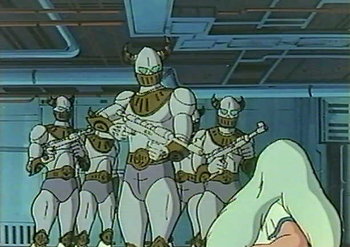 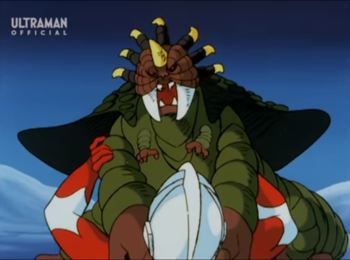 The first monster to be deployed by the Heller Army, it was sent to intercept and prevent the Science Guard Party from ever recovering the battleship Ultria. 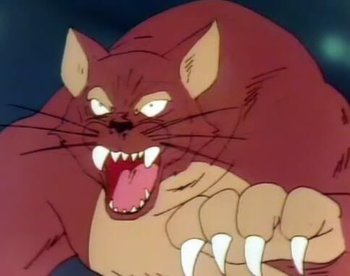 After the Ultria was utilized as the Earth Self-Defense Army's forces, Royger decided to employ the help of their top assassin. At the same time, a space shuttle returned one year earlier from its intended schedule, where its crew members were discovered to have died, all except for a kitten. Unfortunately said kitten is appears to be more than what it initially seemed as. 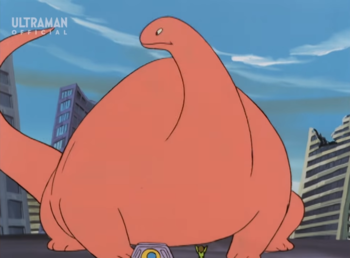 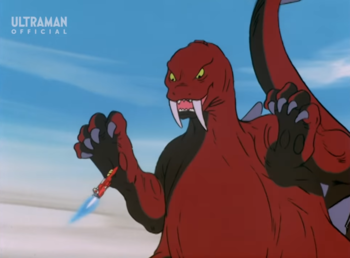 First appearance: The Boy who Brought Along a Monster

The Pet Monstrosity under the care of Alien Opernicus Fedelico. The two were tricked by Royger into attacking Earth under the assumption that his planet would by destroyed by Joneus. When Orolaan retreated from Joneus' fight, the monster was kidnapped by Royger's forces to be transformed into a more feral form against its will. 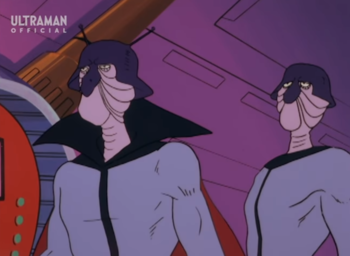 A group of aliens that formed an alliance with the Heller Army, demanding 1/3 of planet Earth if they succeeded. Their force consist of their own saucers, the monster Giros and finally the fake Joneus robot. 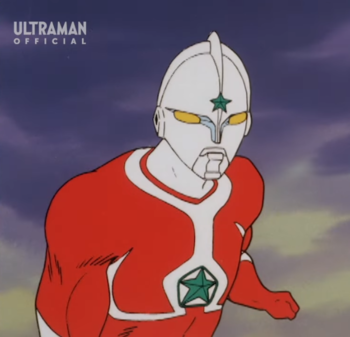 One day on the countryside, the Science Guard Party discovered a monster but by that point, a mysterious Ultra had chase the monster away. After initially assuming that this Ultra may be Elek or Loto, Hikari was shocked to discover him being Joneus. Of course, Hikari correctly deduced that this giant is an impostor of yet another plans made by the Heller Army. 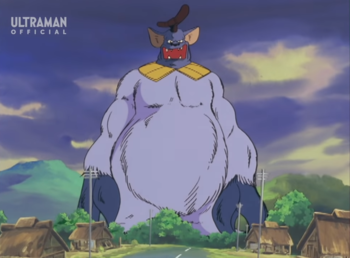 A monster from Planet Giro that constantly appears in Japan to wreck havoc, only to be stopped by Joneus multiple times. Little did anyone know, their fight was more than what it initially appears to be.

One day, a capsule was discovered on outer space as the Defense Army brought it to their base, unaware that it was another half of the teleportation device purposely sent by the Heller Army. Using it, the army try to send their Dostony monster to Earth, but the Science Guard Party Monki accidentally get into the device and forcefully combined into Monki-Dostony. To solve this problem, the Heller Army used the Dostony 2 to bring their fused unit 1 back to their base, forming Neo Dostony by separating Monki and replaced it with the aforementioned second unit. The fused monster was quickly sent to attack the Defense Army's base. 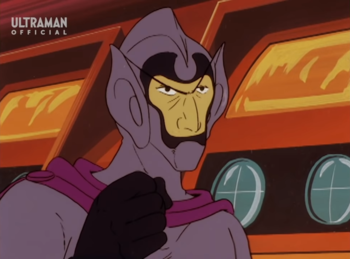 A group of aliens collaborating with the Heller Army, they stationed themselves in the asteroid-turned battle station Sciender to send Capera Don monsters to Earth en masse. When the Science Guard Party decided to bring their battle to space, the Sien accepted their challenge. 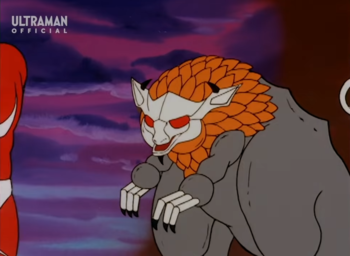 A horde of monsters deployed en masse to attack Earth, they were encased into a capsule to be launched to major cities around the world. A few of them wouldn't pose a problem for the Defense Army, but Joneus had to fight them for the Science Guard Party to leave Earth. 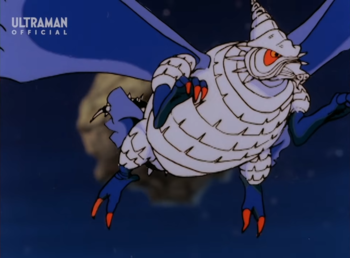 A monster stationed as the guardian of Alien Sien's Siender, facing against the Ultria upon the Science Guard Party's arrival. 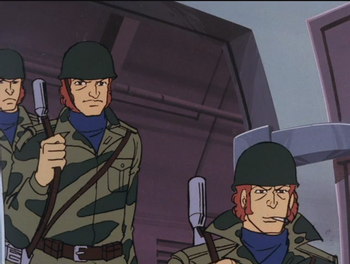 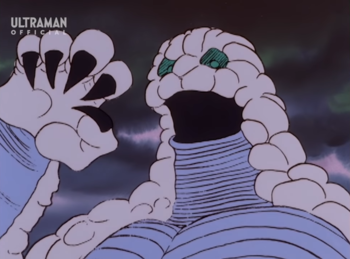 A space monster deployed by Heller Army around the same time when the android impersonators of Unit 201 were sent to infiltrate the Defense Army base. 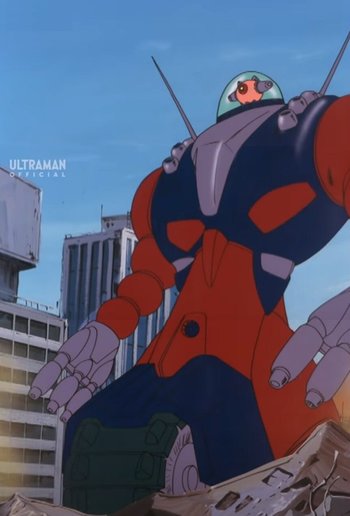 The Heller Army's final monster on Earth, a robot controlled through one of their space saucers. 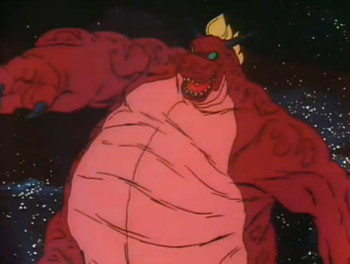 First appearance: To the Ultra Star!! (Part 2: Frontline Base Annihilated)

The Heller Army Titan Base's guardian, sent to intercept Hikari, Amia and Marume when the three invaded the base. 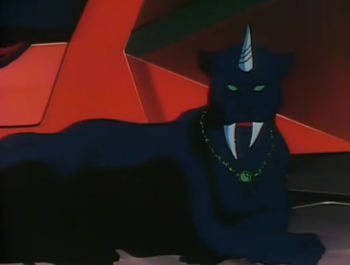 Heller's pet, it assisted its master in preventing Amia from escaping. 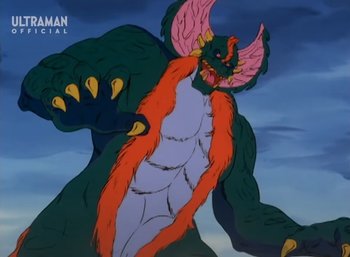 First appearance: To the Ultra Star!! (Conclusion: Victory Toward Peace)

The last monster of The Ultraman. Its the final monster to be deployed under Heller's orders to kill the captured Science Guard Party under his execution.