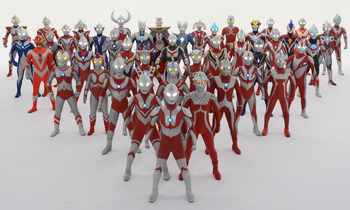 Some of the many Ultra Heroes
Ever since 1966, the Ultra Series has seen countless Kaiju battle many Henshin Heroes, and like any good Sci-fi universe, it has plenty of aliens, monsters and other strangeness to go around.
Advertisement:

This is the index for the character sheets of the many shows of the Ultra Series, placed in chronological order.

Due to the fact that characters (particularly monsters) tend to appear in multiple series, tropes applying the character in general go on their debut series' page. But if the trope is only seen in certain series, it will be put on that series page. For example, King Joe from Ultraseven is a Humongous Mecha in every series, but only possesses an Arm Cannon in certain series, like Ultra Galaxy Mega Monster Battle. So the former trope would go on the Ultraseven character sheet, while the latter would be on that of Ultra Galaxy.