Character sheet for the reinvention of Marvel's not-so-merry Mutants.

Tropes applying to the X-Men as a whole: 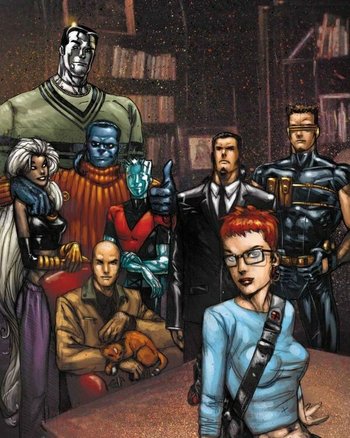 A team composed of special individuals with superpowers led by Charles Xavier. Their actions lead to SHIELD forming the Ultimates. 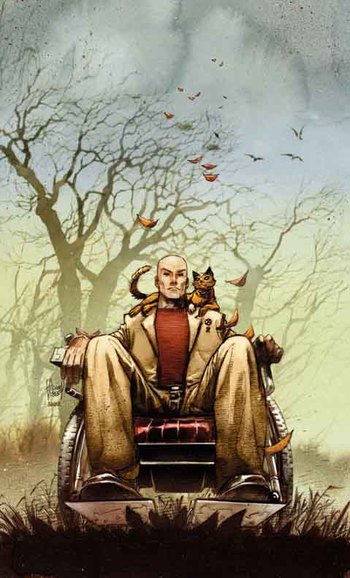 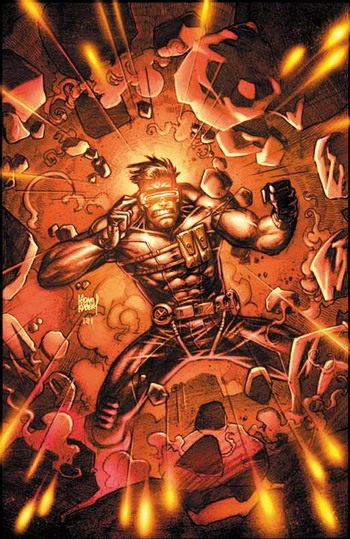 AKA: Karen Grant
Debut: Ultimate X-Men #1 (2001)
"Are we still going with 'Marvel Girl'? I outgrew that handle two bra-sizes ago."
Ludicrously powerful psychic. Has an ongoing thing with Cyclops, not so much with Wolverine.
Beast 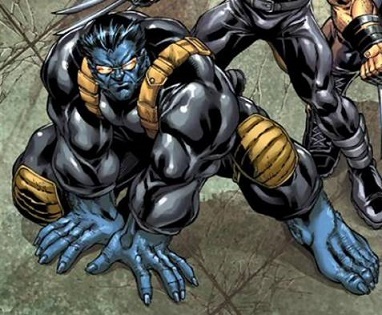 Debut: Ultimate X-Men #1 (2001)
A brilliant young man thrown out of his home because of his hirsute mutations, he found a new home and family with the X-Men.
Colossus 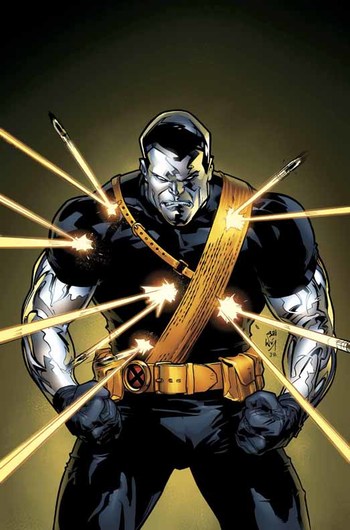 Debut: Ultimate X-Men #1 (2001)
A Russian mutant and former member of The Mafiya, until Xavier recruited him. 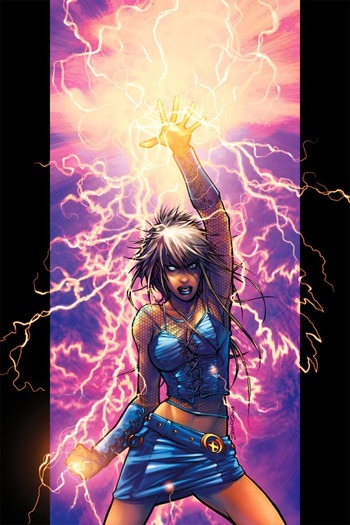 Debut: Ultimate X-Men #1 (2001)
Mother Nature is a Mutant. Let me show you what she thinks of man.
A former car thief from Kenya with the ability to manipulate the weather.
Iceman 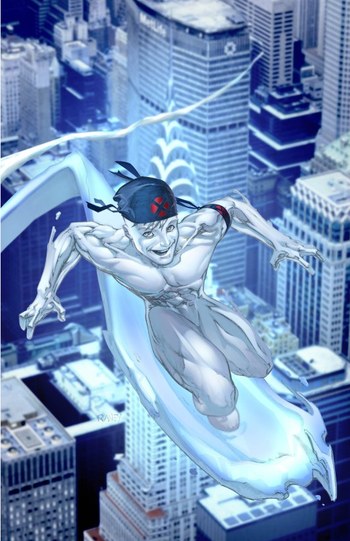 AKA: Bobby Parker
Debut: Ultimate X-Men #1 (2001)
A free-spirited young mutant who ran away from home to protect his family, he was taken in by Charles Xavier.
Wolverine 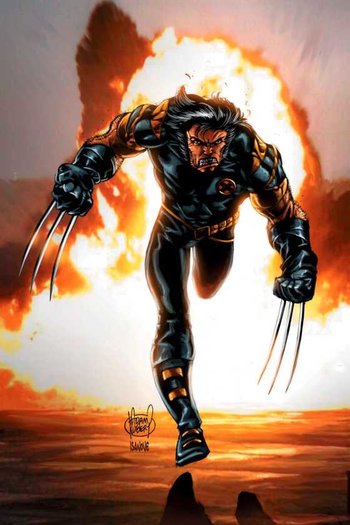 AKA: Logan, "Lucky Jim", Mutant 0, Mutant X, Weapon X, Cable
Debut: Ultimate X-Men #1 (2001)
A mysterious mutant who was Magneto's top assassin in the Brotherhood before joining the X-Men. Has a thing for Jean Grey and young girls in general. Doesn't like Cyclops.
Nightcrawler

Debut: Ultimate X-Men #7 (2001)
A Southern girl forcibly recruited into Weapon X turned Brotherhood member, who eventually joins the X-Men. Doesn't always get on with Kitty, possibly because she is the focus of Iceman's romantic attentions. 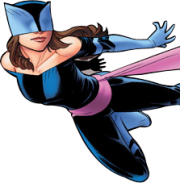 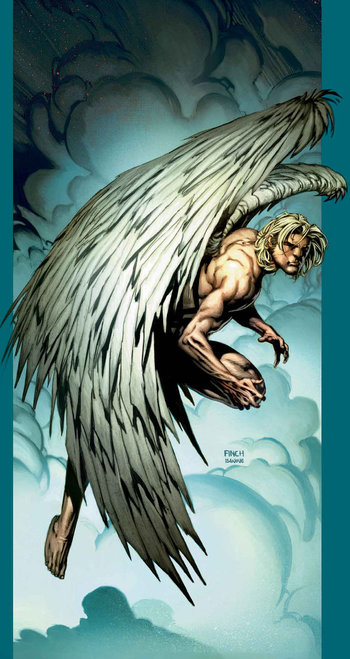 Debut: Ultimate X-Men #40 (2004)
The only child of millionaire parents, Warren was despised by them for his physical mutation and raised in seclusion by servants until Xavier convinced them to sign custody of him over.
Dazzler

Debut: Ultimate X-Men #42 (2004)
An ambitious punk-rocker who was talked into joining the X-Men by the Professor. Not into the whole super-heroics thing.
Bishop

AKA: Prisoner 104958
Debut: Ultimate X-Men #76 (2007)
A mutant freedom fighter from a Bad Future who travels back to the present day to Set Right What Once Went Wrong.
Pyro

Debut: Ultimate X-Men #80 (2007)
A member of the Morlocks and supporter of the X-Men who becomes an Ascended Fanboy after Bishop joins their ranks. Sadly he succumbs to new writer syndrome and is derailed into a villain (and attempted rapist). 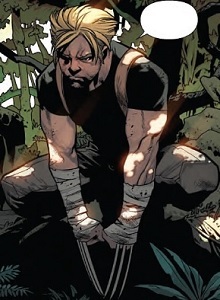 AKA: Jimmy Hudson
Debut: Ultimate X #1 (2010)
Logan's son with Magda, who was raised by the Hudsons in Florida. A racing accident kickstarted his mutation post-Ultimatum, leading him down a path of societal rejection and a civil war between mutants...
Archangel

The Brotherhood of Mutant Supremacy

The Brotherhood Of Mutant Supremacy in General

The Brotherhood of Mutant Supremacy

A cult of violently anti-human Mutants, led by Magneto. 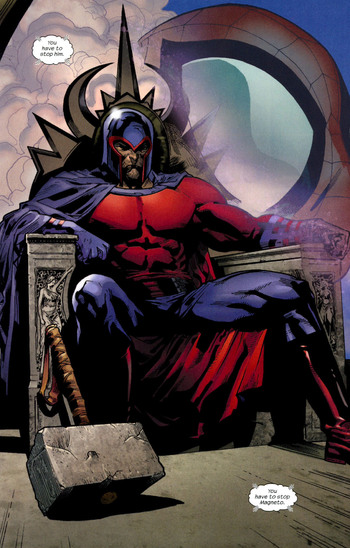 Debut: Ultimate X-Men #1 (2001)
A Super Supremacist mutant dictator who will stop at nothing to see mutants as the dominant species on Earth.
Quicksilver

Debut: Ultimate X-Men #1 (2001)
The son of Magneto, he starts out as a "Well Done, Son!" Guy before joining the Ultimates and becoming The Atoner. He later returns to his father's side and lapses back into supervillainy.
Scarlet Witch

Debut: Ultimate X-Men #1 (2001)
The daughter of Magneto, she starts out as Daddy's Little Villain before joining the Ultimates and becoming The Atoner. She is later killed and becomes the poster child for Yank the Dog's Chain.
Toad

Debut: Ultimate X-Men #3 (2001)
A mutant Master of Illusion who works for Magneto.
Juggernaut

An American "trailer trash" mutant with superhuman and durability.

A talented but passive young mutant who is recruited by Magneto and easily swayed into building a Doomsday Device for the Master of Magnetism.
Multiple Man

A Genoshan mutant charged with murdering the politician Lord Scheele. The twist is that, unlike the classic Longshot, he is evil and actually did commit the crime he is charged with.
Mystique

A shapeshifting mutant who was Xavier's student and lover during his stay in the Savage Land, only to become the Woman Scorned when he dumped her for Emma Frost.
Lorelei

A mutant with a Compelling Voice who Magneto recruits for his assault on the Ultimates. She's controlling Multiple Man into working for the Brotherhood, and in fact has been from the very start.

The headmistress of the Academy of Tomorrow, a rival school to Xavier's. Was also at one point Xavier's lover.
Alex Summers

A human student at Emma Frost's Academy of Tomorrow, famous for winning over 100 consecutive games on Jeopardy!

A subdivision of SHIELD that captures mutants, experiments on them, and uses them as living weapons.
John Wraith 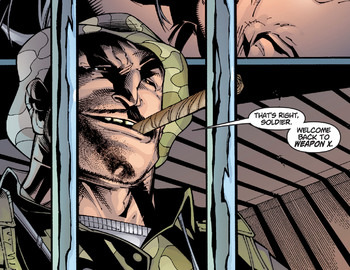 Hope you enjoy the stay

A scientist working in Weapon X, the right-hand of colonel John Wraith
Deathstrike

A Texan mutate whose genes were spliced with Wolverine's by Weapon X. A former car thief out of El Paso, she has a past with and grudge against Storm.

Charles' ex-wife, a Scottish geneticist who runs a separate facility for Mutants with dangerous or harmful Mutations.
Proteus

A scientist experimenting on a super-soldier serum who went insane, and started killing young Mutants, in the belief that it would summon someone he believes he works for. But Essex's delusions might not be all they seem...
Apocalypse

A terrifyingly powerful mutant who claims to be the first of his kind.
Fenris Twins

A pair of rich industrialists who run and own Fenris Industries, and who happen to be mutants with their own agenda.
Mojo

A corrupt Genoshan media mogul who has condemned Genoshan mutants abducted to his island and put through a death gauntlet as entertainment for his countrymen. After his "Hunt for Justice" show is shut down by the X-Men, he takes the fight to them by hiring Deadpool and the Reavers to abduct Professor X, Spider-Man and the other X-Men back to his island.
Arcade

A gaming prodigy turned gun-for-hire who turned to Fantastic Racism after Magneto killed his sister. He is hired by Mojo to hunt down and kill the alleged mutant murderer Longshot.
Spiral

A Genoshan mutant who confronts the X-Men as they investigate the murder of the politician Lord Scheele.
Deadpool

A Fantastic Racist Psycho for Hire who is hired by Mojo to deal with the X-Men after Arcade's defeat. He leads the Reavers, a band of Psycho For Hire cyborgs.

See the Ultimate Spider-Man Characters page for tropes on him.

Formerly an Egyptian thief and Storm's teenage lover, Amahl Farouk's life as he knew it ended when he betrayed Ororo. But while his body died, his astral essence lived on in an immaterial plane called the Mindscape, and after encountering that plane's dark denizens he was reborn as the Shadow King.
Stryfe

A manipulative mutant anarchist who seeks to further fan the flames of hatred between mutants and humans.
Magda Lensherr

A freelance secret agent who engaged in romantic affairs with Magneto and Wolverine, eventually serving as the mother of their children: Jimmy Hudson, Pietro Lensherr, and Wanda Lensherr.

A happily married man from New York, who's wife and child were killed in the Ultimatum wave. Distraught, he blamed Mutantkind, and began his own private war against them, starting with the X-Men.

After awakening as a mutant and accidentally killing his parents, Elliot soon finds himself hunted by Nick Fury. He winds up in the hands of Charles Xavier, then quickly becomes an X-Man and star player.

A woman of sinister morals. Introduced working as part of Roxxon's Brain Trust, she also has other, far more dangerous allegiances.