The Character Page for Twitch Plays Pokémon Red Anniversary. For a directory of all character pages, as well as characters shared between runs, see here.

The protagonist of TPP Anniversary. He started with Pokemon 004: Charmander, and has to somehow get all 151 Pokemon before it's over.
Advertisement:
Blue

AIIIAAB's rival. While he said he chose Squirtle, he started with an Eevee, though it became a Squirtle briefly for the optional Route 22 battle.
Gym Leaders

Leader of Saffron Gym, specializing in the dreaded Psychic-types.

Leader of Viridian Gym and head of Team Rocket, specializing in Ground-types.

The Jr. Trainer in Brock's gym. Had given the main character quite a lot of grief due to using Kabuto and Omanyte, two Water/Rock Pokémon, with the party's only attacker being a Fire-type.

A Swimmer stationed near the front of Misty's Gym. He used a Seadra and a Wartortle to devastating effect.

A female Jr. Trainer next to Route 9's ledge. She knocked the Mob out three times until Parasect learned Slash.

The last Rocket Grunt guarding the lift in the Celedon Rocket Hideout. He forced the Mob to repeat Giovanni's Wild Ride several times with his nigh-invincible Muk.
Non-Trainer Characters

A man in Cerulean City Pokécenter, who walks around and makes it harder to get to the P.C. Tries to warn the mob about Bill.

A sailor in Vermilion City's Pokemon Center, wandering near the PC and sharing his knowledge of how trained Pokemon are stronger than wild ones (due to DVs and such). Was spoken to quite a bit during Massacre Monday.

An old man who trapped the player in a corner of the Pokemon Center of Celadon City multiple times. He would stand in front of the Pokecenter Nurse, preventing even the chance of healing, and yammer about Pokeflutes.

A girl in Cinnabar Island's Pokemon Center who was spoken to a lot. She told Abe about how evolutions can be cancelled.

The Team as a Whole

(The Cabinet, The Congress, Team Freedom)

A Cloyster caught south of Pallet Town after defeating Blaine and depositing Mr. Mime. As of Leech's King release, he is the strongest member of the team.
AAbbABCabb

A Slowbro caught in the Seafoam Isles as a Slowpoke after defeating Blaine and depositing Mr. Mime.
(ssjj ᴹɴ.., "Super Saiyan Zapdos"

A Zapdos captured at the start of Day 18 in a Master Ball, much like AA-j of Twitch Plays Pokémon Red.
Advertisement:
RRRRIIIIH "Rihanna"

A Dragonite caught as a Level 19 Dratini. The mob has taken to calling it "Axe Man" or "Axe Mon".
RRQPO:Pk Pk Pk Pk "Robopon"

A Victreebel caught to use as a cut 'mon.

A team of 3 Diglett that survived the Kakuna Wars. Mostly indistinguishable from each other.
ZZ ZHH "Thundercat"

A Persian with a habit for attacking with money and lightning. His name used to be xSarMnPkPkPkPkPk before the Name Rater changed it to //,,,A Sx=, and then to ZZ ZHH a bit later. After what felt like forever, the mob was FINALLY able to evolve him from a Meowth into Persian! And the mob rejoiced with multiple Thunder Parties!
AAAAAJJAAJ

An Eevee received from Celadon City. Evolved into Flareon rather quickly, since the Mob had bought several Fire Stones.
BBBBBCLLLL

A Marowak caught inside Rock Tunnel. Was exchanged for one of the Diglett.
aa C Deoffa

A female Rhyhorn caught in Dark Tunnel, withdrawn from the PC for its ability to use Surf once evolved.
JJKKKRXXXB

A Snorlax, added to the party after Persian was deposited.
x A Mn Mn Mn

A Krabby caught on Route 15 to improve the party.
AJAAAAAAII

A Victreebel caught in the Safari Zone. Wound up on the party after a massive PC shuffle on Day 12. So far has not done anything to hurt its position on the party. Until it lost Razor Leaf.
"Alakazam" "Alakanope"

A Kadabra traded to Abe for Slowbro that was expected to evolve into Alakazam. It didn't. May actually be Domalakazam from Season One.

An Electabuzz caught in the Safari Zone. Wound up on the party after a massive PC shuffle on Day 12, and after the last Electabuzz the Mob captured was released.
bbbbb-?;]. "Murder Mime"

A Mr. Mime caught in the Safari Zone. Wound up on the party after a massive PC shuffle on Day 12, much to the Mob's joy. Said joy would later turn to hate after attempts to box it led to another total party reshuffle.
HHQQQQQ Qyy

The Legendary Bird of Ice, who lay hidden within the Seafoam Islands off the coast of Cinnabar Island. The Mob engaged it with Zapdos and defeated it, but it fled. It later reappeared after Abe became Champion and was caught in an Ultra Ball.

The Dome Fossil was eventually chosen over the Helix Fossil at Mt. Moon, causing the chat to riot. After a major PC Shuffle it was revived with only its prophet Leech King at its side and the unpredictable Mr. Mime.
A——-aaaa

A Grimer withdrawn on day 15 shuffle. Later evolved to Muk while grinding the Pokemon Mansion. It was critical to taking down Blaine.
IIHNNMMMMM

The Mewtwo waiting in the Unknown Dungeon. Despite its terrifying stats, it cannot attack at all due to its high level overriding Psychic and Swift. It now knows Psychic. It can dodge almost anything.
B-List Pokemon

Heralded by some as the second coming of Bird Jesus, though he claims he's just a simple bird named Boris.

Hotly contested as a total necessity since it covers both Psychic and Water-type attacks as well as learning surf. However, with the withdrawal of Rhyhorn who can also learn surf, it seems as though it will continue to be stuck in the box.

A Muk caught outside Celadon.

A Nidoran caught for the dex.

A Pinsir caught in Safari Zone

The Hitmonchan from the fighting dojo

The third Pokemon caught in the run, caught while attempting to find and catch a Squirtle. Was released whilst trying to retrieve Charizard from the computer.
Fearow

A team of nine Diglett caught in Diglett cave on days 3 and 4. Currently, only three of them survive.

A Diglett caught in the Diglett Cave, following a PC shuffle that left Abe with just three Pokemon.
Lola

A Jynx traded to Abe for a Poliwhirl.
Z Pk Pk r yyz

A Magikarp that Abe purchased just outside Mt.Moon.
Charizard "Growlizard"

Aiiiaab's starter Pokemon. Evolved into Charmeleon at level 19 while grinding south of Pewter. Evolved again into Charizard in Mt.Moon, at level 36.
Poliwag "Poliswag"

The second Pokemon caught in the run, as part of the Mob's strategy to beat Brock.
Kakuna "Matata"

The first Pokémon caught of the run, a Kakuna that only knows Harden.
Venonat
a Venonat caught on day three, and almost lasted an entire day
Weepinbell
A Weepinbell caught on day three, released on day four
Two Meowth
Two Meowth that never saw the outside of the PC. One unnamed and one nammed AAAAKBBBJ "Admiral Catbar"
Exeggcute
an Exeggcute caught on day four
!!qqzyyrrib the Horsea
AHHHHHHHHH the Magmar
JJSSSS Sj SS "Jebuzz", "Jesse"
An Electabuzz caught late day 10
—xx JJRQQQ "Baba Jr"
A Gyarados caught on day 11
AADDMMNMNN 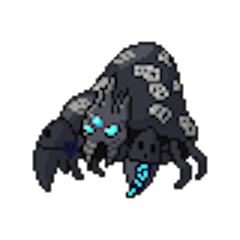 Those are dead Diglett on its back.
Source

A Paras who evolved into a Parasect at level 25. Shockingly, was released on day 31, making it the first signature 'mon to be released.
AAAAAIGFFN
A Dugtrio lost five days after Leech King .
AAI
A Porygon, the 50th and last Pokemon released in the run.

A Slowbro that was traded for an Alakazam once it evolved.

Unusually strong wild Pikachu lurking just outside of Pallet Town. They are aided by a myriad of other Pokemon such as Oddish and Pidgey.
Town Map

The town map Daisy gave to Abe. Spammed a lot in battle. The chat relies on it for direction and battle guidance.
Jigglypuff

A Jigglypuff encountered in Pewter City's Pokémon Center. Due to the amount of times the party lost in Brock's gym, it was often talked to.
Wild Meowth

Meowth found in Route 13, highly-leveled enough to know Pay Day. Adored for literally throwing money at the Mob.
The Glitches
A series of terrifying glitches encountered in the cursed Battle Tent. Some took Pokemon form, some human, and some things that no man should see.

Tropes that apply to The Glitches as a whole

A level 207 glitch Pokémon that was added to Abe's party in place of Onix during his first Battle Tent challenge. It was displayed as Golduck on the stream's party display, but once it was sent in to battle, its true form was revealed...

A glitch Pokémon resembling Charizard that appeared in Abe's party after his second trip to the Battle Tent resulted in half of his team being deposited into the PC. Despite its appearance, it is actually a form of the infamous glitch Pokémon 'M that occupies hexadecimal slot FF

. Due to acting as the cancel button, their presence at the top of the party made the game ignore the presence of Rhyhorn, Onix and Marowak, causing Abe to black out every 10 or so steps he took.
Rocket HQ's Tile Puzzle

The tile puzzle found in the Rocket Hideout, later named the Wild Ride. The Mob was stuck here for nearly two days, despite passing through one floor in five minutes and eventually grabbing the Lift Key.

The first Champion of the Twitch Plays Pokémon lore. When the Mob checked the bed in Abe's house, a time skip occurred to "Later that night...", and Abe entered a dream where he ended up on Mt. Silver. Red appears before Abe and challenges him to a battle. Some lore portrayed the regular Red as Abe's older brother, guiding him on his quest at times.

The 151st Pokemon in the Pokedex, said to be the ancestor of all Pokemon and long believed to be extinct. On a hunch, the Mob followed instructions laid by an old rumor which stated that Mew could be found hiding underneath the truck in Vermillion Port by using Strength and moving it to the left. Unlike previous reports of the rumor being false, it turned out to be true, and Mew appeared from underneath the truck before fleeing. After acquiring Ultra Balls, Abe accepted the NPC's offer and ended up in its lair: a mysterious island with Level 80+ Pokemon.

The area where Dream Red is fought.

The mysterious island where Mew fled to upon being found.

Giovanni's replacement for the Gym Leader Rematches. With Giovanni gone, the Pokemon League has installed a special PC in his Gym for battling purposes until they can find a new Gym Leader. This PC uses a team similar to Giovanni's.

The resident Pokemon Professor of Kanto.