The Character Page for Twitch Plays Pokémon Black. For a directory of all character pages, as well as characters shared between runs, see here.

"Take a look at your team Jimmy. They're all ordinary 'mon. No Legendaries, no Gods, none of them even evolved. But together with you, you helped them become strong. The favor goes both ways. I know we've had our... difficulties but you are not the same kid you were when you set from Nuvema Town. Remember how badly you wanted to be a legendary hero like Alice or Napoleon? You weren't a hero then but idk man, look at you today: Blue Eyes White Dragon over there pretty persistently begs to differ. And Jimmy do you know whats the best thing about being a hero? You don't have to do it alone."''
- The Voices to Jimmy before The Final Battle

The protagonist of TPP Black, a young man from Nuvema Town. He is a long time fan of the Voices and previous Hosts... and is maybe TOO eager to follow their commands.

He reappears in Black 2 at the special Twitch Plays Pokemon Tournament held at the PWT, as the starting opponent that Cly had to face.

3 years later, he gets a revisit, and finally gets to become the Champion.

In Black 2, she has become Professor Juniper's assistant.

In Black 2, he is now the first Gym Leader, taking over for Lenora as the Normal-type Gym Leader.

The Team In General
NONNQWMMSO (Nonon)

"Just Toad it"
- Popular chat chant to murder something with her

A Tympole caught in a Great Ball. The chat tried getting rid of her...with catastrophic consequences, only for her to be the sole survivor of two massacres. She was then embraced by the mob and became the de facto leader of the new team: The Expendables, albeit her psyche took a sizable hit after seeing so many horrors. She finally gets to evolve all the way into Seismitoad during the revisit 3 years later and leads the team to an epic victory against Alder.

Her ability is Swift Swim.

A male Joltik. His ability is Unnerve. He fully evolves into a Galvantula during the revisit. 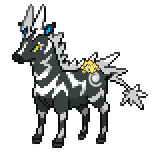 A male Tranquill. His ability is Super Luck. He gets to fully evolve in the revisit.

Along with Bird Pat. Matt is on the right. Sprite Source

A female Deerling. Her ability is Sap Sipper. She has a Sassy nature. She fully evolves into a Sawsbuck during the revisit and becomes dramatically more powerful.

A male Zebstrika. His Ability is Lightningrod.

A male Druddigon. His ability is Sheer Force.

The second female Purrloin to be caught.
Sewaddle

A quintet of Cottonee. The unnamed female was traded for Lillil.

A Timburr of unknown gender.

A pair of Darumaka.

A trio of female Sewaddle.

A quintet of Pidove.

A quartet of Sandile, two caught on Route 4 and two caught in the Relic Castle.

A female Scraggy caught on Route 4.

A Sawk caught outside Pinwheel Forest.

A quartet of Yamask caught in Relic Castle.

A pair of Purrloin.

A quintet of Joltik caught in Chargestone Cave.

A quintet of Klink.

A group of thirteen Deerling.

A group of twelve Watchog.

A quartet of Tranquil.

A sextet of Zebstrika.

A Litwick caught in the Celestial Tower.

A pair of Cofagrigus.

A pair of female Vullaby. GMHM was caught in the Master Ball.

A male Lillipup. He is of a Brave nature,
, (Commander)

GMYC's starter. He is of a naive nature and likes to run.
mbbqUU FG

A male Pansage. He's of a Brave nature and is somewhat vain.
B66 4ssidb

A female Purrloin. Has a Relaxed nature.
Tympole

A female Petilil received in a trade for a Cottonee.
Tirtouga (Lord Cover)
A male Tirtouga revived from the Cover Fossil.
Tranquill

The player character not chosen by the Mob. Hilda lives in the Battle Subway since she wasn't chosen. After defeating Ghetsis, New Game was selected. Hilda was chosen and named FGQ UVL. She chose a male Oshawott, defeated Bianca and Cheren, and was erased from existence as the stream went down.

Or so it was believed. She makes an appearance in the Nature Preserve in Black 2, using a fairly powerful team, including a Level 100 Zekrom along with five Level 98 Pokemon.

A legendary, white Dragon-type Pokemon said to have been split apart from a single entity. Reshiram represents truth, and awakened from the Light Stone in order to test GMYC to see if he was worthy. GMYC captured Reshiram, but instead of using it against N, stored it in the PC, choosing to fight N using his own Pokemon who struggled to become strong without evolution and survived being released in order to avenge their fallen friends who were taken by Team Plasma.

A legendary, black Dragon-type Pokemon said to have been split apart from a single entity. Zekrom represents ideals and has been awakened by N in order to make his dream of a world where Pokemon are liberated from their trainers a reality.

It returns in Black 2, but is converted into the Dark Stone once again in a trap set by Ghetsis and forcibly fused with Kyurem to create Black Kyurem.

After CLY becomes Champion, N battles her with Zekrom, and it is defeated. N then bids Zekrom a touching farewell and reverts it to its Dark Stone form and gives it to CLY, who reawakens it and captures it using a Dusk Ball.

A trio of legendary Pokemon known collectively as the "Swords of Justice". They serve as protectors to the environment of Unova and will openly challenge humans who would dare trample upon the homes of Pokemon. When the Master Ball was used on a Vullaby, the Mob decided to challenge and defeat them. Cobalion was bested by Zebstrika after attempts to catch it failed, while Virizion was left in critical condition after being instantly knocked out by an Aerial Ace from Tranquill. Terrakion was also in critical condition but refused to be caught and blacked out the team. On a second attempt, the Mob ran away in fear of its overwhelming power.

In Black 2, they once again appear upon sensing Team Plasma's evil and begin seeking out strong trainers to aid them in their cause. CLY encounters them but does not capture them, instead choosing to fight Team Plasma with the Pokemon she had raised. After she becomes Champion, Virizion appears again, but is killed by Zoroark.